You don't talk about the Ukraine ...

... here at Peak Stupidity. I mentioned in a comment to Dieter Kief that I have followed hardly any of the details of the Russia/Ukraine War - been, what, 3 months now? That's the time since our first post on, basically, why we are not "covering" this story. "Covering" is in quotes, because, no Peak Stupidity's job is not to cover stories but to sift out the stupidity in all the stories.

The idea is not to diminish this war as a joke of any kind. War is as serious as things get for those involved. It could even escalate to where it IS the biggest stories for Americans too, if some of the Neocons have their way. However, I maintain that the huge, saturating amount of coverage is a purposeful big distraction for Americans on the part of the Lyin' Press.

There's been an acceleration in the ruination of the American economy. Inflation is now high enough such that it's not just in wonky Peak Stupidity on hedonics in which you'll hear about it. Even the most un-noticing of people are noticing. The country is going 3rd-World in other ways at a noticeable pace now, exacerbated by the Kung Flu PanicFest, of course. "Covid-19!" was the excuse for everything for a couple of years. Now it's "supply chain!"

I don't know if the Russia/Ukraine war story is still capturing the Infotainment audience it did before, as, again, I'm not paying any attention. Perhaps it isn't, as we now are hearing about the MonkeyPox. MonkeyPox? 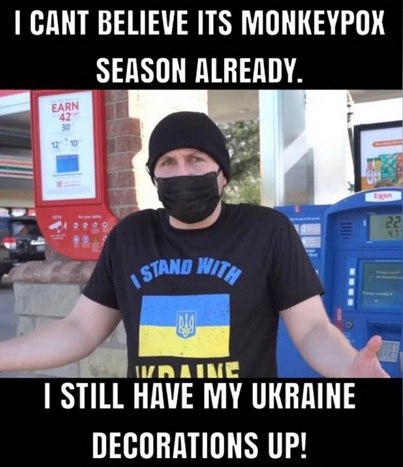 I thank Peak Stupidity and Unz Review, commenter Adam Smith for this one, another of his great pieces of artwork. Great job, Adam!


Note: I found this web site extremely slow this morning, but then it's been fine the last few hours. Anyone else have any problems?

Anti-Gnostic
PS Thanks! But I had to back out of the deal after seeing that closing costs now come in at 5% of the transaction (because, again, the mortgagee is not even breaking even on the loan payments--they are tacking on higher fees). So now I'm having to lower my sights. :(
Moderator
PS: A-G, yes, that must have been the mid-1990s or so when Haiti was the most important country. America really had it good in those years. The (what should have been) peace dividend from the ending of the Cold War and all that goodwill we had built up, then a divided government - at least after the '94 election. I thought it would keep going well...

Economically, my personal experience re consumer goods, at least, is that inflation really was almost nil for a decade there - maybe mid-'90s through mid '00s. Interest rates were at level that perhaps were appropriate - the price of money, as is the idea of interest.

Nope, it can't go on. Good luck with your housing deal.
Anti-Gnostic
PS I remember being puzzled about the process by which, around 10 years ago, Ukraine started becoming The Most Important Country In The World.

I'm so old, I can remember when Haiti was The Most Important Country In The World!

Now those sound like pretty bad mortgage rates, right? Except inflation is OVER 8% A YEAR. The mortgage holder is losing money every month. No wonder the Fed is still buying MBS's.

It can't go on forever so it won't!
Moderator
PS: Yes, the Biden family has been wrapped up in shady Big Biz dealings in that country for a long time, Dieter. I suppose that is part of the reason "we" are involved, along with the usual Neocon hatred of Russia. As you write about, the sex. drugs, and rock-n-roll are these American high rollers acting like this is the 1960s and the rest of the (2nd) world is their plaything, especially fun and profitable when there's some kind of proxy war going on.

Thanks for your report on this site.
Dieter Kief
PS
Yeah, I see Mod. Peak scaryness would be another website.
Adam's artsy comment above did stick with me too, and I also appreciate it (and - once again - - hope, things will not play out quite like this...)!

The Ukraine thing is spooky too (scary at least in the back of my head) because Joe Biden is so slow (and so deeply - let me say: involved in this Ukraine story since decades, and via Hunter Biden's laptop with the password assXXck69 (this seems to be real, this passwort I mean (a speaking detail of this affair). So - this is part of the Biden-family's approach to Ukraine since years. The rock'n'roll approach I tend to call it: Money aplentay, and sex 'n' drugs on top of it, .c.o.m.bi.n.e.d. with partially US-funded secret biolabs (spooky again, to say the least).
And a public sphere that is kept clean with reagard to this kind of - may I say: Inflictions - from Silly-Con-Valley "dorks" (Joe Rogan) and the New York branch of the US-media business (another dozen or so people...- plus Joe Bezos).

Sigh. The amount of ignorance with regard to a sound public sphere (a sound public debate of quite some important things at stake...) might allow to call all of this above - including the actual baby formula shortage - stupid. - - - With the words "might allow" I want to express the thought, that this could "quite easily" (Mick Jagger) be just me.

PS: The site was slow yesterday and didn't open up at all sometimes. Fine today.