No, this is not an Abbott and Costello routine. We're hearing that question more and more these days ... 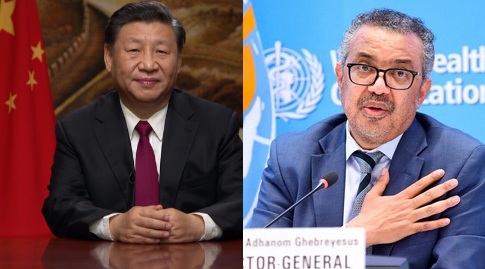 You really ought to know you're losing it when you've lost The WHO. That would be the case if you're the road manager of the tour 1/2 an hour before the show. It's also the case if you're Chinese Communist Party Chief Xi Jinping, and you can't even get The WHO to back you in your efforts to LOCKDOWN cities in a Kung Flu Panic.

Most of Peak Stupidity's Kung Flu PanicFest articles of this Spring have discussed China's stupidity in this regard. Who'd have thought (not The WHO, for sure) that the country that had DEFEATED, wiped off the face of their land, I tell ya', the Kung Flu, would have had to institute an encore PanicFest, and what an encore, indeed! I mean, this may be end up bigger than than the rest of the show!

We think it's a political show. President Xi doesn't seem to care how he ruins his country and its economy with this. He doesn't take criticism of his Covid~Zero well either.

Per a recent NY Post article, China slams WHO chief as ‘irresponsible’ for saying zero-COVID policy ‘not sustainable’. Oh, oh, there's that word "sustainable" again. It's often overused, but does have a meaning, as we explained in Toward Sustainable Stupidity. WHO Director-General Dr. Tedros Adhanom Ghebreyesus (see, not Abbott and Costello) is right about the lack of sustainability, as you're simply not going to keep the detectable level of any variations of a virus zero. That's especially the case if you keep running around detecting it, by swiping trucks, fish, chickens, cats, and everybody! People with common-sense know that, once you're satisfied it's not a big threat, you quit checking! From Snejana Farberov's (definitely not Abbott & Costello, but maybe another routine...) article:

China’s Foreign Ministry spokesperson Zhao Lijian defended the controversial strategy that has placed harsh restrictions on hundreds of millions of people across many cities in China.

“We hope that relevant people can view China’s policy of epidemic prevention and control objectively and rationally, get more knowledge about the facts and refrain from making irresponsible remarks,” Zhao said at a press briefing in response to the criticism.

(PC wokeness doesn't stop at the California coastline either, as Spokesperson Lijian is keeping his gender under wraps.) Well, you probably have made history with your prevention and control over there, Mx Zhao. No other country has been able to use it to instituted Totalitarianism and Orwellian control as well! We hear from Dr. TAG (we call him) and one Mike Ryan:

When we talk about the ‘zero-COVID,’ we don’t think that it’s sustainable, considering the behavior of the virus now and what we anticipate in the future,” Tedros said.

Tedros was joined by Mike Ryan, the WHO’s emergencies chief, who said all pandemic control actions should “show due respect to individual and human rights.”

Countries need to “balance the control measures, the impact on society, the impact on the economy. That is not always an easy calibration to make,” Ryan said.

Actually, it is. You have to value freedom though.

The WHO officials’ [Mild] comments were not covered in China’s state media and were censored on social media.

C'mon, man! What are you, one of those American university students? Wait, here's the good part:

The daily number of new cases in Shanghai reported Wednesday had fallen to less than 1,500, down from a peak of 26,000 in mid-April. Seven more COVID-19-related deaths were reported, raising the toll from the outbreak to 560. 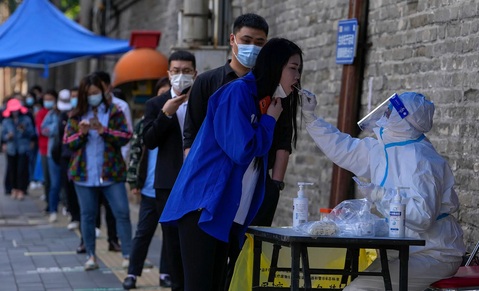 So 560 Shanghaiers died with COVID-19 this Spring. There are 20 million people there. A very quick math calculation says that an average 500 to 600 people would die there from something EACH DAY. Over a 100 day period, that means it's one in 100 deaths with COVID-19.

Now, they'll tell you, I'm sure, "what if they hadn't LOCKEDOWNed people wherever and whenever they pleased? Huh, what then?" Well, I'm guessing a bigger, but still small absolute, number of people would have died. More people would have gotten sick for a while. Is it worth it, this new way, Chinese people? You'd better bet your life. Or life will cut you, cut you like a knife ..

Finally, we try to keep up a little here, but that's the first I've heard from WHO Director-General Dr. Tedros Adhanom Ghebreyesus. Maybe there was a different leader of The WHO around during the big PanicFest here. I don't know, last I recall, the leader of The WHO was a guy named Roger Daltrey.

You Better, you Bet is from The Who's 1981 album, Face Dances. John Entwistle's got a lot of energy there!

There may be another reason the Chinese are doing what they do. They are being attacked with biological warfare and know it. They do not know how bad each attack will be, or if it is very deadly and swift acting, so the only action they can take is to react quickly lest it kill off substantial proportions of the population.

Now this may sound wrong but look at the new "monkey pox" that no one knows where it came from and how it is created as according to the powers that be it is totally different from normal monkey pox.

Look at corona. Five different government research laboratories said at the beginning of the outbreak they sequenced the virus and that it had various strains from all over in it and that there was no way possible that it was not engineered. They all said they were going to write papers on it then...nothing.

I know someone personally who got corona and he felt that he was close to dying and ended up in the hospital. He was in excellent shape but older. I think 62. He now has been vaxed and recently suffered a mild stroke. Sigh.

According to viral weapons researchers designed viruses have a much faster break up time than normal ones, so this would account for the rapid declining effects of corona. As I said I have a close personal friend that felt the effects of the early virus, and he almost died.

If you look at this from the perspective that there is definitely a group making and releasing engineered viruses, then it becomes very clear that what they are doing in China is not some half brained thing. It's a desperate attempt to stop the viral attacks before they can do more damage.

If you will note there was another viral outbreak in northern China of a Hemorrhagic fever, really bad stuff where you bleed to death out of all your orifices, Ebola is a hemorrhagic fever, they stopped that by the same method of quarantine.

Another point to be taken into account is that Russia says that there were biological weapons research laboratories in the Ukraine.

All the things I just said are facts according to the media. Are they true? I don't know but they did report these things. It does seem very much that the vax they have been giving has killed a vast number of people. Why is that? Does that fit with the idea that they want to murder people?
Moderator
PS: I am sorry to hear of your Interior Minister, Mr. Kief. You wonder how much of this a country can take. It was OK to have a few bad ones back in the 1980s, with plenty of sanity in other positions to keep them confined. Nancy Faeser needs to be confined.

Alarmist, I was not aware about the Clinton machine news. That's a good question. There are so many dead people connected to the Clintons - nobody this well-off and well-known though.

Mr. Blanc, just what you wrote was to be part of this post (but it can be in another). China had everything going for it. When they do things like this, maybe Americans should quit worrying about them taking over everything after all. Is it an official-Communist thing? I mean, the place is not at all economically Communist, which explains how badly it's done in the past. There was no need for all this. It's, yes, just self-destructive.

Is Xi just trying to demonstrate to the rest of the world's elites how much control he can attain, as in "hey, I can do this for you all too. Let me know when."

MBlanc46
PS It certainly doesn’t break my heart to see China self-destructing. I just can’t figure out why. Whilst they weren’t a certainty to become the dominant power in the world in the very near future, they sure were headed in the right direction. And now Chairman Xi, having made himself Ruler for Lite, seems to be chucking it all away. Or maybe, there’s something going on that I’m missing.
The Alarmist
PS

Speaking of deaths, how about the possibility of the premature demise of Mr. Musk now that he has taken on the Clinton Machine. It’s either death or prison, possibly both.
Dieter Kief
PS
German's Minister of the Interior, Antifa-Leftist Nancy Faeser, is close to the authotarianism of Xi's China. She - tweeted! - with her best intentions: We define, what makes you feel comfortable and at home - multiculturalism!