Finally, a Federal Reserve Board that looks like America! 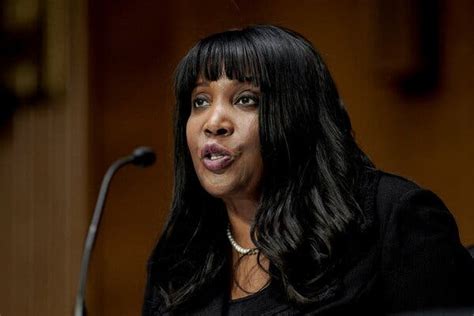 Lisa Cook, pictured above, is the newest Federal Reserve Bank Board Governor, the first black lady to ever hold that post. This is supposed to be exciting for us how, now? It's not like America really needs more competent Governors of this non-Federal Reserve-less organization that creates money out of thin air and holds interest rates down, screwing over little old ladies and any other conservative, responsible savers. We could use a little more incompetence at the FED board, in fact, and this lady may just be the one to have it.

Hell, we don't know. Lisa Cook could be a smart and competent lady. One of the pictures had her with a big stack of books. It's just that, after almost 60 years of Affirmative Action, you kinda doubt it... We shouldn't care.

The way things are going financially in the country now, one wonders if these FED board members will ever be blamed for the ruination that's coming to fruition as we write. It may come to be one of the more dangerous jobs, being a FED Governor. I've seen those lists of dangerous occupations - deep sea fisherman, logger, bush pilot, ice-road trucker, etc. FED Governor may end up coming right after #5, crack whore, and from the picture, I can't be so sure that Lisa Cook will not have held numbers 5 and 6 on the list.

Unless the FED is terminated with extreme prejudice, none of this is news. I do have a question I'd like to ask any one of the FED Governors of any race, ethnicity, sexual orientation, or bipolarity, right after I show him these 2 glossy color pictures here:


Here's how much it costs to borrow money from the bank:

Don't be so sure you'll be on the low end of those ranges either. You must have excellent credit, having borrowed before, used credit cards and not have been a deadbeat with them, you know, like by paying them back before interest accrues and tricks like that, fully paid your $1,300 bill for the 30 minutes behind the counter at the ER* without insurance, etc.

On the other hand, you can also lend money to the bank too, by letting them hold onto your money.


Here's how much the bank will pay you to borrow from YOU: 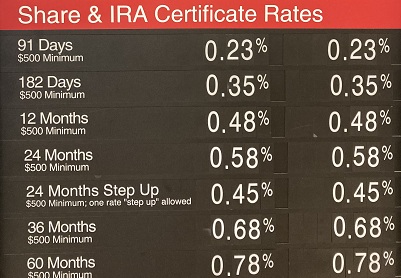 Just be careful now. If you don't hold that 60 month certificate for the whole 5 years, they WILL penalize you on some of that 0.78%! interest. That means they will keep some of that 3,961 dollars that you would have made on a $100,000 certificate after 5 years.**

During that 5 years, it's best if you don't think too much about inflation, which at the current government-alleged rate, will give you $68,060 in buying power after that time. Don't forget your $3,961 in interest though! Also, don't forget to pay income tax on that at your marginal rate. Like I said, it's best not to think about it.

Oh, I almost forgot to ask my question: The bank is paying back in the range of 1/50 of what people pay to borrow money. Where is the rest of the money going? Show me the money!

Sure, I know, they have a nice clean, air-conditioned lobby, with fake-rock counters and a stained wood island that had to be taken out for COVID and is nowhere to be found. They have the nice solid ink pens, chained with 50 thousandth plastic-covered cable, so customers can't steal them. How could they make any money if we kept stealing the pens?


* Spoiler alert: I sure didn't. I paid about $250, and when the guy called me, I told him "look man, $250 ought to cover it. I can't be paying for the 5 illegal aliens that were in there with us that afternoon." Well, this guy really seemed to take offense at this, but I repeated my statement along with "that's all you're getting man. See ya'!"

Sometimes, having "----" as your credit rating can be a real cool hand.

Imagine knowing you only got your sinecure because of your gender and skin color.

Probably doesn't bother someone who has no integrity.

☮
Anti-Gnostic
PS Agreed. Not sure why the Fed uses that terminology.

BTW, I'm old enough to remember when share prices were reported in fractions. I think because it made it easy for traders to work out prices in their heads and translate into their hand signals.

Now of course it's all digital and electronic handhelds, when it involves human traders at all.
Moderator
PS: I wasn't referring to your "100", A-G, but just an example in my head. I often thing that people in many non-technical fields make up terms to make it seem like it's more scientific and to cause those not in the business to think there's more to it. Maybe it's because the journalists don't do very well with decimals?
Moderator
PS: Haha, A-G, that was funny due to the use of "basis points"! Can't the financial people just talk in percentages? OK, so you mean half a percent? Just SAY that.
Anti-Gnostic
PS That rug on her head alone has got to be worth 100 basis points.
Moderator
PS: I bet that straight here takes a lot of work, though. It's probably a good thing, as it'll keep her too busy to print money.
The Alarmist
PS

Well, it looks like she made her peace with World War Hair, so how bad can she be?