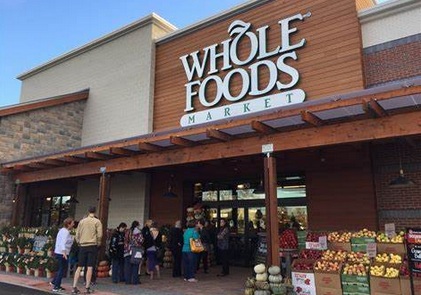 Because there was a short bit of discussion about residual face-masking in Europe in the comments under this post, I'd given my 2 cents about the situation at the location of Peak Stupidity's main campus. My best estimate is only a residual 3-5% face masking here.

Then, I went into Whole Foods yesterday. Amazon owns the high-priced health/fancy food chain, so they have a place to drop off returns. (We may otherwise only get in there a few times a year for some food.*) I will say, this returns process was pretty non-bureaucratic and smooth. Sometimes the new, internet-based ways ARE better and quicker (though that's not the case nearly as often as it ought to be). We printed the return 2-D barcode from the amazon site, I brought it in with the box of stuff and, with nothing much to say, it was just "OK, you're good."

Let me back up 30 seconds. There were 3 young white Millennial women in that customer service area, 2 out of 3 of them masked up. As 2 customer were wrapping up whatever they were talking about, I noted that one of the young ladies was barely understandable, with her black cloth face mask. It was like listening to the old AM radio at night when the skip that got us WLS all the way from Chicago was not so good. I was glad I didn't have to deal with her.

Then, I kid you not, I heard one of the 3 telling the other 2 something about "being misgendered". I really wish I'd heard a few more words of this. I don't think she was referring to herself, because there was no question in my mind about the "she" part(s), but you don't know anymore, right? I didn't want to ask a thing. I just have never actually heard that phrase in real life before.

The 3rd of the 3 young ladies was the one I did deal with. The only question I did ask had to do with her needing my bar code or not to go along with the box. I wanted to make sure that it wasn't missing something, as, just because the process seemed smooth, computers aren't so forgiving. She had that usual Millennial way of not wanting to talk about anything that wan't part of the "script" of her job. Asking other questions seems to trigger these people, as if it's a threat to them.

Secondly, as I wrote a bit about in Not a 21st century man, I don't have that same mindset of these young people that computers are running this world, and you don't need to understand what they are up to. Let them do what they do. They are running the show now.

I did get off into a completely different topic from the Kung Flu Stupidity, so let me just add that part here. The face masking percentage at Whole Foods, of both the customers and employees, was at something like 20-30%. Wait a minute, people! Aren't we the healthy ones, coming in here and spending a premium on this healthful stuff? Why are "we" wearing these worthless face diapers at a factor of 4 - 10 x the regular non-healthfood-shopping population?

That was the case even in the parking lot,. Speaking of the parking lot, this nicely wraps up my post here, taking about 10 x the time to write than my actual experience with those Whole Fools. One of those Chrysler retro muscle cars was backing up near me on the way out. "Black people", said not just the car model, but the tinted windows. The problem I saw was the this driver was backing up pretty quickly still toward about 1 1/2 ft. from a parked car. "Whoa!!!" That was automatic. I don't want to see anyone bash up a car.

Well the lady (black lady - I was right), rolled down the window after hearing me and stopping. Right before she could say a word, I thought "Ahhaa, back-up cameras!" Yeah, I've gotten 6" from my other vehicles with our one that has this feature**, albeit a little more slowly!

Yep, the lady driver was very nice, and at the same time as me said "yeah, got the back-up camera." "OK, I didn't remember about that. You about freaked me out." She was smiling and appreciative. This lady was a few years younger, but no Millennial. I think there is a real generation gap, as I can't deal with the Millennials at all sometimes as I can with ... hate to say it ... regular people.

In their defense, the young people, especially the White ones, have been screwed with so much over the last few years by both the wokeness and the PanicFest. That's too bad, but anyway I don't deal very well with the whole fools at Whole Fools.


PS: I will have to populate lots of previous posts with this Muh Generation topic key, but that'll take a while.


* Sometimes they have some good deals, but NOTHING is a good deal anywhere lately. We happen to be in a location with this large healthy-food chain, one medium one (it used to be a 1970's sized grocery store, and one small one. The small one jacked up prices to exorbitant levels well back before the latest bout of higher inflation - we haven't even set foot in there to see. The medium one is a happy medium - this is the place where I was given an ultimatum during the '20 PanicFest summer that went "wear the mask, or I can't check you out". They got over that, and I forgive them for their insanity.

** With the terrible visibility this thing has, especially out the back, you'd better get one. (I made sure ours had this before I bought it.)

Moderator
PS: Regarding Alex Jones and frogs: I really like Alex Jones' spirit. I imagine some of his theories are pretty out there and untrue, but he's been proven right, in general on anything involving governments of all sorts doing evil. He has been a solid Constitutionalist, like a wilder, less polite Ron Paul (and more ready to fight, but then Ron Paul is in his 80s).

Anyway, here's the frog part. Alex Jones sounds like a frog. That is, at least when I used to watch him some on PrisonPlanet/InfoWars. It was as if he just needed a glass of water to clear his throat but his throat never cleared. As much as I liked what he had to say, he was hard to listen to.
The Alarmist
PS

I will admit that someone at UR told me that it was fish, rather than frogs, but I would imagine the chems are doing it to all.

I was kinda joking, Mr. Moderator, but maybe there is something to it.
Maybe the atrazine is turning zoomers gay, just like the frogs. (Alex Jones was often ahead of the curve.)

“...the resulting right-wing death squads will likely show no mercy.”

Not if the tap water and soy paste turns them all fabulously gay.

I had it on good authority (Alex Jones) that the chemicals in the water were making the frogs gay.

The problem with the pendulum swinging so far to the left will, at least for the 40% or so, is that the resulting right-wing death squads will likely show no mercy.
Moderator
PS: Adam, that's a good question as to whether there is anything real (chemical, in this case) about this or not. I'd always assumed NOT. I'd heard these things about the small amounts of hormones, etc. being flushed down and out into the downstream water supply, but my common sense tells me the dilution would take out any effect.

I guess one can easily do some kind of calculations. My common sense could be wrong on this.

You have a nice day too, Adam. Gonna do a little prepping now...
Adam Smith
PS: Good afternoon, gentlemen,

Is it just a fad? Or are the endocrine disrupting chemicals in the water turning the kids gay?

I hope you all have a great day!

☮
Moderator
PS: #MeToo, Alarmist. I guess you can call it triggered. When I hear the stupid phrasing and the snowflake mentality, I it's like I'm a hair-trigger pull away from projectile vomiting. "No, no, it's not the oat bran and bean sprouts! Your food's fine. It's you!"

I like the shooting analogy too.
The Alarmist
PS

I’m triggered by people who say they are triggered, particularly those who feel they might be misgendered, because they obviously don’t know how to handle the equipment God gave them in life, much less the self-control to use it properly, so how can they be trusted to have any trigger control or discipline?