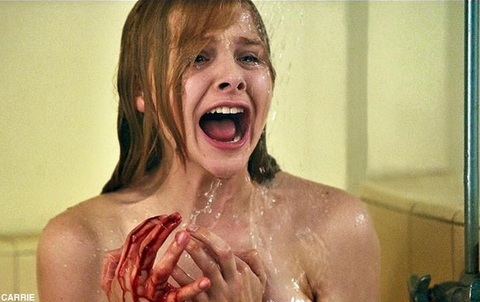 There was Megan's Law, there was Kristen's Law, and even a Buster's Law, named after a cat*. Now there is Carrie's Law. Who is this Carrie, you ask? Hold on. We'll get right to that.

The Governor of Oregon, a piece of work going by the name of Kate Brown, has just signed the D-legislature-passed bill #3294. Some, policy wonks mainly, know it as "3294", and the public may have heard it by it's official name, "The Menstrual Dignity Act", which as you might well expect, is just a simple common-sense regulation that mandates feminine napkin machines in all school boys' and men's restrooms. Think of it as a tampon Title IX.

Hey, it's not a lot of money, and there's even a Menstrual Dignity for Students Toolkit**. I gotta admit my ignorance here. I thought that toolkit would be an actual box with dispenser installation wrenches, screwdrivers and hardware. Maybe a drill would be necessary too, and if you're gonna go through the tile, why not just drill a through hole to allow the guys to see into the women's room, you know, to see if their machine might have some spares.

The Peak Stupidity readership shall no longer wonder why our software team re-ran the mathematical models that resulted in the new graph displayed up top near the end of last year. Every time you think stupidity has peaked, well, there are stories like this that are NOT from the Babylon Bee.

Over 3 years ago Peak Stupidity took the lead in speculating on the idea of real menstruation, at least for transitioners. Our quick look at the challenge is in the post Can Male to Female Transexuals have Periods?. Our conclusion was the the technology is not there yet, especially the specific tech that could induce artificial bitchiness. The question we have today is how has the State of Oregon gotten so far ahead in the technology, such that the demand is already there for these tampon dispensers? What a tech powerhouse Governor Brown has commanded! Bloody amazing!


Governor Brown, on one of her "light" days: 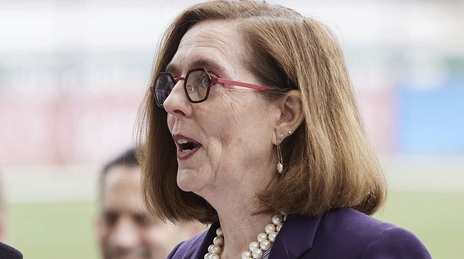 Now, why "Carrie's Law?", you may yet still be wondering. I'll tell you now. When it comes to this female stuff that nobody really makes a big effort to know about, besides Proctor & Gamble and the State of Oregon, I recall that the Steven King movie Carrie was my first look at how this stuff goes down. It was the gym teacher in her white shorts that clinched the 2-thumbs+ up from this young reviewer, but that Carrie shower scene was a real wake up call too.

The female body is great, but it's a bit weird internally. It has to be, for it to do its job. Even the menstruation process is there for a bloody good reason. Peak Stupidity has speculated about this too, in a more serious post -- Feminism 102 - Mother Nature expresses herself monthly. (Yes, you are required to read the prerequisite post Feminism 101 - It's not nice to fool Mother Nature! first.)

I don't mean to make light of people like our tragic Carrie, actually, to be honest, Sissy Spacek. In the movie, the young lady was clueless as to what was going on and scared out of her telekinetic mind. That'd be terrible. It'd be much better if girls nearing that age could be taught about these things, but by their mothers. It'd be great if boys still didn't need to know all that.

I wish the students of the State of Oregon well in this project, but knowing young boys, up to about 35 years old, I'm not sure how much Menstrual Dignity will be seen out there.


* This was a sick one - a young black man named Chester Williamson of Schenectady, NY set the cat on fire. Before I even looked up a thing about the man, I guessed that he was black. Sure enough, and a year later he became a sex offender to boot.

BTW, the Mental Floss site has a quick list of laws named after real people here.

MBlanc46
PS How insane can it get? Is there Peak Insanity? Are we getting close to it? One thing is as certain as things can be in the material world, when we get there, this will all collapse upon itself.
Moderator
PS: "Right next to the beer-vendor stand for efficient recycling." Indeed. Greta would have approved, Robert. Thanks for the stories!
Robert
PS: Mr. Moderator, fifty-some years ago many (well, at least the couple I went to) sports-stadia had those floor-to-eye level type urinals --- actually a single knee-to-eye level two foot deep, twenty-foot wide deally-bob. Looked a lot like the old-fasioned wash tubs. Quite handy really for large crowds between innings or at half-time. Right next to the beer-vendor stand for efficient recycling.

Mr. Kief, one of the times I was in college, there was a local bar called The Hole in the Wall. They had some kind of charity fund raiser with a calendar called 'Girls of the Hole' where the waitresses (and a couple of the regulars) were pictured at the urinal in the bathroom. (All fully clothed, if in (very) short skirts.) It sold quite well, but generated some negative feelings among a certain type.
Dieter Kief
PS
If I remember that right, Berlin Punk-clubs had urines for the gals. If memory serves even more, Islands Pop-Punk-Icon Björk did use one of those - soemhow - famously.

"The Big Chain of Being had been torn apart, as if it would have been a chain of paper-clips, fumbeld together by a slavering idiot..." - a fat & fun young gay genius from New Orleans once wrote while contemplating the disruption, that modernity had brought with it by destroying the medieval aproach of the Christian community...(in these days, there were a fifth of todays inhabitants in Konstanz, but much more churches than today - not to mention the monasteries and chappels and prayer rooms etc. pp.
Moderator
PS: Yep, like a cult, Dieter. Most cults though, to give them credit, may proselytize and annoy people with public displays of their stupidity, but they don't force people to join up. These people need for everyone to be onboard. They won't take "I gotta do my hair tonight" for an answer.

Alarmist, I too am surprised the urinals are still around. You'd think there would have been a Title with some Roman Numeral already that specifies equity in public elimination. BTW, this may be TMI, but sometimes one wakes up with a non-sexual hard-on and has to pee badly. Those are the times I wish we had one of those floor-to-eye-level urinals at the house. It's like going outside. I've seen only a few of those recently, but they are around still - "Legacy Urinals"?
The Alarmist
PS

As for math modelling, here’s your daily dose of math Zen:

Of course - this one is about solidarity. Feelings. Belonging. Being vulnerable.- We all are human beings and thus - suffering.
So - here we go into the realm of the perfect wokies: Feels 'n' - - - unifying! - solidarity. Public suffering too.
A cult. Near the toilets, of course. The purifying water and the host. Its all there. I'd assume the pat dispensing machines are - white. - Hehe: And - there you have shown it to us already, its men!-struation, Mod. - these people aren't stupid, they've studied their language quite thoroughly: The Linguistics of Equity, chapter one to forty-four...