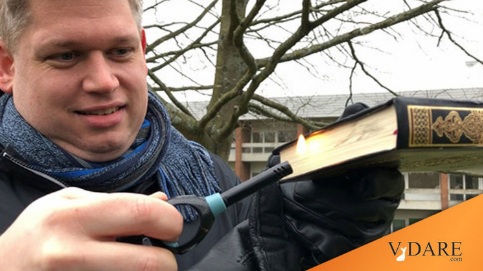 Nah, it's not like Peak Stupidity is here to trash the religion of Islam. However, seeing people who are not cowed and silenced by the Moslem guests and invaders to their countries into withholding all criticism and ridicule is very heartening. We've had decades by now, in which there have been Islamic critics having to go into permanent hiding, newspapers who've published mocking cartoons being bombed, and, well, Christianity being the only religion that it is just perfectly OK to make fun of.

I suppose burning the Koran is not just making fun, but it's sure making a statement: "We have the rule of law here and a tradition of liberty. If you don't like this, don't participate. Nobody's got a scimitar to your neck."

VDare has followed all of this tomfoolery that the immigration invasions to the Western world countries have spawned, along with everything else immigration related. Naturally, one could read about this heartwarming story there first, and they have just the guy to do it. A writer named Harri Honkanen writes in occasionally with his take on political, ethnic/racial and immigration matters Scandinavian. He's not just your average American Tom, Dick, or Harri - he knows his Scandinavia.

Yesterday, VDare published his article Swedish Political Class Dumbfounded by Paludan’s Koran-Burning, Muslim Violence. I'd never heard of this Rasmus Paladan, but he's got to be a courageous and tough guy. It's mostly the Moslems that he should be worried about, but, as cucked as Westerners have been, you'd figure most of the Swedes would consider him an enemy too. (Well, that's outwardly. We'll get to more on this.) Here's the man's background:

Paludan is the 40-year-old leader of the minor Danish political party Stram Kurs (“Hard Line”) which narrowly missed out on gaining seats in the Danish parliament in the country’s 2019 election. It obtained 1.8 percent of the vote, just short of 2 percent threshold required to enter parliament. Paludan’s father is Swedish and he himself lived in Sweden several times during his childhood [Dozens arrested at Sweden riots sparked by planned Quran burnings, BBC News, April 18, 2022]. However, as I have reported before, both Wokeness and Islamic violence are far worse in Sweden than in Denmark.

In August 2020, Paludan declared that he would come to Sweden and burn the Koran. He was promptly banned from entering the country in order to avoid disorder. So his supporters burned the Koran in the Muslim-heavy city of Malmö. The result: a riot by “well over 300” Muslims who burned tyres, threw rocks and blocks of concrete at the police, and smashed bus shelters [Riots erupt in Malmö after far-right activists burn Koran, by AFP, The Local, August 29, 2020].

That was a proper riot and a good start, but his '22 tour is bigger and better. See, Sweden let him into the country, cause they had to now.

In April 2022, Paludan was allowed to enter the country, because he had obtained Swedish citizenship by descent. He applied to hold his protests in city centres. Some police forces banned them due to fear of disorder, some moved them to areas outside the centre and some simply allowed them [Koran burning and riots in Sweden—the day after, by M. Apelblat, The Brussels Times, April 21, 2022]. On April 14, Paludan attempted to give a speech in town square of Jonkoping, in the centre of the country, but was drowned out by a Leftist Lutheran priest ringing a bell [Dozens arrested at Sweden riots sparked by planned Quran burnings, BBC News, April 18, 2022].

On April 15, the Easter weekend that also coincided with Ramadan, Paludan planned to burn the Koran in the immigrant-heavy city of Linkoping in the south of the country. He had to be surrounded by police protection to do this, with a violent crowd of about two hundred demanding that the police stop him. There were scuffles and the police were pelted with stones, compelling them to close off the area to the public [Danish far-right party leader burns Holy Quran under police protection in Sweden, by Atila Altuntas, AA, April 15, 2022]. Three police officers were injured in the rioting and the windows of police cars were smashed. Amid the riot, Paludan didn’t manage to perform his burning ...

Don't you hate that, when you pay good money to see your favorite stars and they don't even play the hits burn the Koran? Things went better, and you can read more of the article for the info. The really cool and unexpected part of Mr. Paludan's '22 tour is that the Swedish police have not been dead set against him. This is in sharp contrast to the corrupt and cowardly Charlottesville, Virginia cops of 5 summers ago.

Yes, that is unexpected. Swedes were the Westerners you'd especially figure would just be too darn nice to say anything about their Moslem problem, and, sure you COULD burn a Koran in public, but why cause trouble? That's just not being nice at all!

Peak Stupidity has written this before, we'll write it again, and SOMETIME - I don't know when - we'll see this behavior in action: Real resistance to the assaults on our LIberty, the replacement of the White middle class, and the Globohomo agenda will start with a small spark by one or a few courageous individuals. The rest think it's a bad idea to be out there risking their jobs, careers, and families on their own. They are pretty much right. However, some have less to lose or just don't care as much. At any time, the formerly reluctant people may join these leaders or "early adopters" en masse.

The Swedes see Rasmus Paludan out there doing this outrageous thing. Even if they are outwardly outraged, thoughts may come to them such as "there's nothing wrong with what this guy's doing", "he's getting away with it", and maybe even "I could have done that." and "let's see, what's the next step in finally doing something about this existential problem?"

Who knows, but it just takes a spark. The Swedes know they have a problem with the 10% of the country or so who are highly-foreign and highly-unSwedish-like. The Moslems there will never assimilate into that peaceful, liberal, Socialist society. How long can you ignore the problem or lie to yourself and all around you about it? This Rasmus Paludan is something else, and Peak Stupidity wishes him a highly successful tour!

OK, there's no possibly way this blog could finish this post without mentioning a real American character named Ann Barnhardt of Colorado. In fact, her 11-year old Koran-page burning video is still up on youtube. I remember this, and I remember that I thought the bookmarks made of bacon were a real nice touch. Oh, and I've always appreciated Miss Barnhardt's sublime use of the sorely underused cussword "jackass".

Dieter Kief
PS
PS
This Babylon-Bee Musk-satrire is fun, Alarmist! Made me wonder: What about Bee-dolf 'itlär?
(It made me laugh. - Mayb because of the Germn saying "he who says A has to say B too"?)

Ahh  - and btw: The Danish cartoonist, who drew the Muhammed-caricatures, Kurt Westergaard, made his life extremely uncomfortable - and dangerous. He passed away not long ago, 87 years old.

- That's a fine article in Der Spiegel/ English edition about Kurt Westergaard's life before and after becoming world-famous...

Moderator
PS: Thanks again for the BB hilarity, Alarmist. I didn't even need a tweet then, I guess ...
The Alarmist
PS

Ah, stories that warm the cockles of one’s heart.

And now, for your moment of weekend Zen ...