The short but expensive life of CNN+ 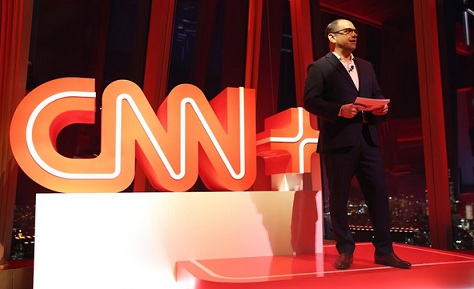 I won't link to this story, as the gloating is pretty widespread. You can find something quickly on the new streaming video channel CNN+. Maybe we have some readers who are heavy cable TV users, LUV LUV LUV CNN, and would like to know how to sign up. Well, sorry, the both of you, you can't, because after CNN's spending of $100 million to start this up, CNN+ got something like 60,000 of you to sign up, but that was not enough steady money to support even the most minimal fake news staff comprised of interns, so they shut down after 3 weeks. Hahahaaa! Should the Peak Stupidity bloggers be gloating like this? Yah, you betcha!

What were they thinking? Do they really not understand that a lot of people who are said to be part of the CNN audience are people who walk by the TVs in airport terminals with headsets on, for reasons like that, just as not all USA Today "readers" do more than step on that newspaper upon leaving their hotel rooms early in the morning? How about all those regular subscribers though? There are 10's of millions! Yeah, but upon reflection, one may note that they don't have a freaking choice that CNN CAN come on their TVs. That doesn't mean it DOES, though. It's bundled with the rest of the 357 channels and 1 in 357 may be better odds than what are the real chances of these supposed CNN viewers being actually tuned in.

This cable TV bundling of channels has been a real scam for 40 years, about the time viewers were also still told another one, that "there would be no commercials". How do they really know who's watching which channel? If the viewers paid per channel, they would be more discriminating, and the market would give us the viewing data these guys could have really used.

This ain't the mid 1980s, when it was such a cool thing that one could watch the national newscast at a more convenient half-hour than 6:30 to 7P (5:30 to 6P Central). This ain't the 1990s either, when CNN had gotten lots of viewers hooked by telecasting that Gulf War I Shock & Awe and started adding all kinds of opinion shows. The CNN heads's heads must have gotten really big during the last 20 years, and CNN seemed to be trying to MAKE news as much as reporting and opining on it.

I guess there is a contingent of some millions of older people who are hooked to the TV and CNN, not knowing how to get the news that might be more truthful off the right portions of the internet. However, if they don't get the internet, I really doubt they are ready to sign up for Roku and get streaming channels. "What, screaming channels?! That's what I got now, sonny. I don't need my hearing aid during most of the shows. They call it Cable News Network. It's new!" 60,000 viewers is one in every 5,000 Americans. That's not enough to be an influence and not enough to make money by a long shot.

Speaking of streaming video, my favorite new VDare writer Jack Dalton had something about Netflix in his recent article* about Elon Musk buying Twitter, in which gloating would also be an appropriate reaction:

Musk said the same thing [that wokeness is a "mind virus"] about Netflix, home to such invigorating shows as the rabidly anti-white Dear White People, the historical illiterate Vikings: Valhalla (complete with a black Norwegian ruler) and the shockingly pro-black cowboy movie The Harder They Fall—where the black cowboys kill only white people, Subsequently, Netflix saw the biggest one-day stock drop in market history (due to declining streaming subscribers) [Netflix Loses $54 Billion in Market Cap After Biggest One-Day Stock Drop Ever, by Todd Spangler, Variety, April 20, 2022].

(As is usual with VDare, there are lots of links there.) Yeah, well, along with CNN+, I am not a Netfix subscriber either, nor any other TV. Right now, I'm on Season 2 of The Rockford Files. What do the TV executives do about good old boys like me?

Yeah, now that's a great excuse for some Don Williams music. We've featured this guy before (I'll put links in when I find the posts). This one is from 1979.

Those Williams boys, they still mean a lot to me, Hank and Tennessee.
(Did you first think he was singing about tennis players?)
I guess we're all gonna be what we're gonna be ...


* I'm really glad that Ron Unz features lots of VDare writers, as much as it's obvious that the man hasn't learned Jack Squat about the immigration invasion problem, so is not in agreement. Here's Mr. Dalton's article on The Unz Review, with already 100 or more comments: Musk Takes Twitter. Is Left Right to be Terrified?.

Moderator
PS: I don't know why the "Yah, you betcha" came into play, but that did come from Fargo and those kind of people, you betcha'!

Alarmist, I hadn't considered this scam. I'd figured these people were just stupid and clueless.
MBlanc46
PS “Yah, you betcha”. Is that indicative of another “Fargo” enthusiast?
The Alarmist
PS

My take is that CNN+ was a scam to shovel boatloads of money intothe pockets of Zuck’ friends before Discover could pull the plug on Zuck and his coterie.

Consider it a golden parachute, because it certainly was never a well-formed business proposal