Nope, I don't mean to imply that we made another Peak Stupidity road trip, as pleasant as it was. We will just revisit these Stonehenge style monuments in east Georgia in the blogging sense. The visit was in mid-December, and there were supposed to be a number of additional posts about it, to follow Peak Stupidity Field Trip - The Georgia Guidestones: Part 1 and Part 2. Additionally, a strongly worded memo from the PS Accounting Dept. has let me know in no uncertain terms that, if we don't get more posts out of these road trips, the field work budget will be cut drastically. Good barbecue will be totally out of the question*.

That last crack was fair enough for the commenters who rightly chided me in Part 2 for not convincing the rest of the crew to go for some Georgia BBQ there in the small town of Elberton, Georgia. I never even noted the 10 guides for mankind on the stones, though our always helpful commenters had plenty of info. like that. I'll show them too you in 2 pictures - those are over 16 ft tall stones!


Granite Capital of the World! Use it or lose it. First 7 pieces of advice: 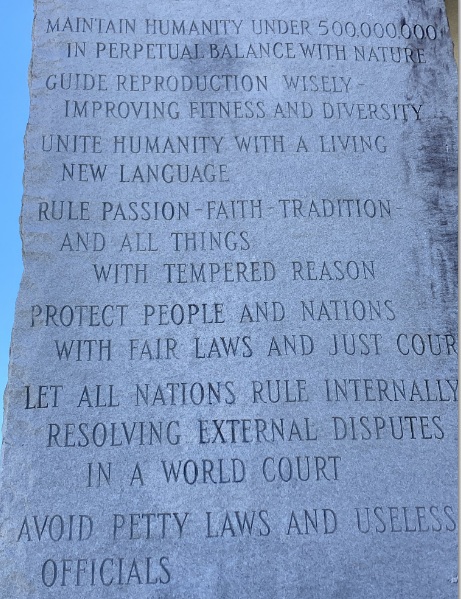 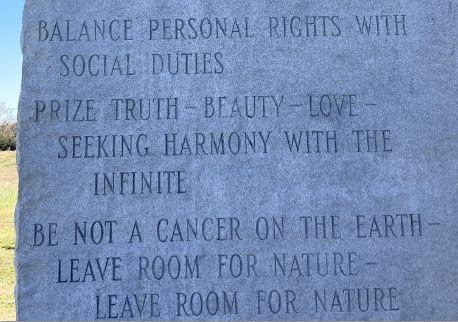 Everything looks more important when carved into a 20 ton piece of polished granite. Is this stuff important? Peak Stupidity only got the grant money (thank you, taxpayers!) for the trip due to that first guideline, the deal about limiting the world's population to 1/2 a billion people. That probably IS a nice number for the world to have, but even in July, 1979 (at the latest, the time "R.C. Christian" worked these up), it would have taken a reduction by 7/8 to get there. This one had, and HAS still, a lot of conspiracy theorists students wondering if the Bill Gateses and George Soroses of the world have been over to Elberton, GA for some guidance**.

We'll discuss all of these guidelines and then the book published by this R.C. Christian 6 years later*** some more, but it's the first one that gets people curious how this monument came about and, if they need to visit to help confirm this or that conspiracy "theory". I wrote "theory" here in quotes and "students" above, because in this post, I want to discuss these terms, as used usually by the Lyin' Press and your compliant sheep to discredit anyone who believes anything but the Establishment narrative.

What are conspiracies anyway? The on-line American Heritage Dictionary says:

1. An agreement to perform together an illegal, wrongful, or subversive act.

2. A group of conspirators.

3. An agreement between two or more persons to commit a crime or accomplish a legal purpose through illegal action.

I don't see anything there about long-term evil plans to change the world (even through LEGAL action) though. Has this definition been changed while we weren't paying attention? Now see, there's a conspiracy for you already.

Peak Stupidity has been of the opinion that the Globalist elites of the world, even through recent history, have been just plain not smart enough to carry out really long-term evil plans, say on the order of a century. See Stupid vs. Evil and long-term conspiracy theories and our self-rebuttal. In that latter post, we mentioned the Frankfurt School, one which many would say was a perfect example of a group of conspirators in it for the long run.

I don't know, but c'mon, JFK anyone? There are so many reasons for people to have done that, that it almost can't NOT have resulted from a conspiracy. There are so many others happenings in American (and any) history that could be explained better as a conspiracy than as in the standard history. Ron Unz, the proprietor the favorite political forum of many of us here, The Unz Review, has many such theories that he puts in his (often quite interesting but slightly long-winded) American Pravda series.**** I believe him on some and for others, his take seems entirely too far-fetched.

On this site, since we spend good money (at this point - "shit's gone up.) for the URL, we tend to lean toward a stupidity-based explanation for much of the ills in recent history that we blog about. There are indeed masses of stupid people believing the same stupid things they are told for like, 2 years sometimes - that rings a bell, doesn't it?

Yet, there IS evil in this world, and some of the people in power that we consider evil don't even bother to make plans in secret anymore, like the Jekyll Island crowd 108 years ago. Now, they tell us right to our faces. Those Davos conferences and the World Economic Forum are good examples. Are they so proud of their positions of power that they can't help but boasting? Can't they meet in basements of Frat Houses or something, do a few rituals, and keep their evil plans secret? I'll tell you what, Satan is not sending his best minions anymore.

Those who denigrate anyone who speculates about ANY alternate causes for the way history has gone down by using the term "conspiracy theorist" are close-minded followers of the narrative of the Establishment. Based on that book by R.C. Christian, we'll speculate next time about the conspiracy theories around the Georgia Guidestones.

* If you remember, there was a big discussion about barbecue options in Elberton, Georgia. I could have expensed it all too, to ... well, me. (Helps with taxes I guess, if they'd ever read my forms to begin with.)

** It may be difficult to get a Gulfstream jet, Challenger, or Falcon in there with 5,000 ft of runway, but hey, humble yourself and take a Citation - don't worry, nobody will recognize you.

*** Thanks to the always helpful commenter Adam Smith. Hat tip.

**** Really, that series is, per the name, a general deep criticism of the American Lyin' Press. Many of the articles do include stories of secret plans and such.

“It depends on what these meetings really are...”

☮
Moderator
PS: In my mind it's sort of like that, Mr. Blanc, but it depends on what these meetings really are. I tend to think of it as just really informal, as in, this one CEO of Tyson Chicken (just giving made-up examples, mind you), runs into the CEO of a big residential builder at the the FBO (where they park their jets or King Airs). "Yeah, we've got the same problem, Joe. Let me give you the number of this guy who works for me - he's a US Senator, I mean - and you let him know how much of a bind we are in for labor right now. I mean, we've had to give out 12 bucks an hour. Can't feed the G-600 like that, man."

"No, sure can't. Thanks for the card. Yeah, how's your vax program going? We went all out - fired all the guys who wouldn't do it. Honestly, I don't give a shit about that Covid stuff, but this is just some ass-kissing I gotta do so those State legislators I know will look good for the Governor - man, he's a fanatic! But they're going to vote against that BS e-verify stuff for me and help get my guys voter IDs at the highway department. We got it all worked out."

"Ha, nice. Let's keep in touch." They've got the same common interests. I don't know if there are official meetings (other than at the really high level, such as the WEF) or written out plans. The end is the same.

Moderator
PS: I will hardly ever get the Dylan references, Dieter, but yes, that Kris Kristofferson-written Johnny Cash-sung (and later Shawn Mullins-sung) "Sunday Morning Coming Down" is one of my favorites. Yeah, maybe loaded down with tuna, maybe loaded down with meat bombs (crude pilot term for skydivers - really great people though!)

I didn't hear about that hole-in-one by Mr. Trump. That's got to be a thrill for anyone, even to see, by someone who thinks golf is BORING BORING BORING.

MBlanc46
PS I’m sure there are conspiracies. But there is also convergent evolution. The movers and shakers have some common interests, usually the higher-level interests. Enough of them are smart enough, and in any case are rich enough to hire people who are smart enough, to grasp what their common interests are and what will be required to achieve them. There doesn’t need to be one big meeting to hatch their nefarious schemes, there are hundreds or thousands of smaller meetings all round the world where that is done. Then they publish there findings where those who need to know can find them, negotiate any inconsistencies, get everyone on board, and Bob’s your uncle. Offshoring, mass immigration, etc. ensue.
The Alarmist
PS

Speaking of tracks, what do you call Ukranian infantry going up against Russian armour? Track grease.

Time is a Jet Plane, Alarmist and Mod. - It Moves Too Fast, sang the bard on - Blood on the Tracks, mind you (more "Dark Visions" there as those he had presented 10 years before - "Of Johanna", kinda.)
So - 500 million people cast into polished granite read now a bit outdated already.
But still woth to think about. In the end, lots of mistakes will add up and - form the solution. In hindsight, it will look like a take off from an obviously short runway, with a heavy load of tuna fish on board.
That's true Mod. - And not far away from that scene, it will be remebred, that ex-president Donald Duck, excuse me, landed a 180 feet hole in one, while at the very same time Disney World Fla. woke up to wokism 100% in the fabulous springtime of March 2022! - True "on a sunday morning sidewalk /(...) partly truth and partly ficition").

Moderator
PS: Yep, Alarmist, I wonder if getting off usually takes more than getting in. It depends on whether you require a "balanced field length" for T/O, I guess. 10,000 ft?! What if you lose just 1 of the 4?

Safenow. yeah, it was a fun outing. Since it was a nice day, and there was nothing but mowed grass around, the kids could get some energy out. Yeah, I guess 20 minutes of paying attention to the markings and then listening to us speculate about things and bullshit is pretty respectable. It was a nice small friendly crowd out there. Bill Gates sent his regrets. (No regrets on my end!)
SafeNow
PS

Well, now I feel bad for not commenting. Belatedly, I will say this. It caught my eye that kids got bored after 20 minutes. You wrote that as if it’s a short time. Maybe I am cynical, but I think that for kids these days, that’s a heck of a long time. My theory is that the kind of parents and the kind of kids who go there are sort of traditional people, interested in traditionally engaging pleasures more than in twerking.
The Alarmist
PS

You could land a G-600 there, but it might get hairy on takeoff.

One of the four-engine water-burners I flew needed the full 10k of runway even rolling from the high end of the runway downhill and was still struggling to get up and go. I’d love to try a G-600 on only 5k feet.