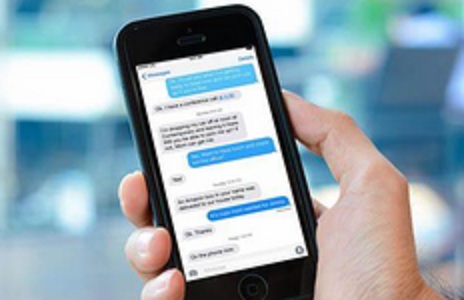 I've lived the life of a smart phone owner and usually carrier for a couple of years now. I don't take advantage of the "apps" as much as a large majority of others, but I do appreciate a few features. We smart phone carriers can send to-the-minute pictures and video. Yes, I can show friends and family around the country what topping I've got on my pizza. Wasn't that the main purpose for this?

There are people who like to do the texting with actual text, as in words, too. I remember this starting up in about the mid-'00s, before the smart phones came into being. Besides the fact that the carrier company was making bank by having people send 50 bytes at a time instead of thousands of times that many just for a quick low-quality voice conversation, my policy was and still is "one reply only". If you write back or ask me a follow up question, can't we just talk for 1 minute? The phones still do that, you know.

Well, that's friends and family (remember the "friends and family" plan?), and you don't piss them all off by not humoring them a bit. However, Big Biz is big on the texting action now too. I goes along with all the other Curmudgeonry that Peak Stupidity occasionally rants about covers with our Customer Care (just imagine air quotes when I say that) topic key.* Big Biz wants NO PEOPLE to actually work for them anymore. They want to run the show with computers and various piece-parts of artificial stupidity, rake in the dough, and spend the weekends on Fantasy Island.

Via some pre-programmed texting, a computer will send out these text messages to tell you to use your smart phone to enter some more stuff, tell us how you like our Customer Care, when the internet guy is coming, do you want to keep the appointment, then, he's coming tomorrow between 9 and 11, do you still want to keep the appointment? Like that. I don't see a reason to text back. If you're gonna be late, call me. I may still be there.

OK, I exaggerated, as there has to be a few boots-on-the-ground (usually White) guys to do actual hardware work. That guy called me earlier in the morning and came within the minute of when he'd told me. He got his own work done, but there was a real problem determining if we could get to the underground line. We talked about his job, inflation, and real money for a bit, in total agreement, and he left.

Well, after guys in 3 vans and a pick-up truck were all there for 3 hours trying to figure it out (they got it!), I got a message: "There is a delay in your installation. Our associates will be at your home to fix ..." If it were just a little bit easier, a reply of "No shit, they've been here 3 hours" would have gone out, but it'd probably have not reached any human eyes. (Does a smart phone make a text if there's no human to receive it?)

After looking through the messages later, I did see that the first one told me I could text "STOP" back to them to cut these off. OK, I should have, but see, I don't like texting! I hate that they make me do it.

That's a very small problem, I guess, but to backtrack to get to the funnier part, when the text came about "he's coming tomorrow, do you still want him to?" I did text back "Quit texting the living crap out of me! Just send him over. I'll be there!" I got sent a nice message back confirming the appointment. "You got it!" I thought, just for a second, but, nobody actually "got it" in the sense of "understanding". That wasn't a human - it's probably just the default if you don't reply in the negative. Should it still feel good to show one's anger by text message if no human gets it? That's a philosophical question beyond the scope of this blog.

MBlanc46
PS Hail: So they knew what the consequences would be, but they went ahead and did it anyway.
Hail
PS

Your comments on 1950s-era phones got me thinking of a remarkable newspaper cartoon. This cartoon ("The pocket telephone---When it will ring!") was published in **March 1919**, and seems to have predicted the world of ninety and one-hundred years later very well:

This was satire in 1919, too absurd or comically horrible to ever be real. That's why this "pocket telephone" goes into the pocket of a cartoon buffoonish sap character.

Sometimes it's funny to see what satirists or futurists (the two can overlap a great deal) of a past era cone up with comparing to future developments. One man's futurism, another man's satire, another (later) man's reality.

People have integrated the "pocket telephones" into their realities in a way that they don't understand the disruption, and semi-surreality, now built into their own world. But these 1919 people (or 1950s people, or even 1990s people) would have instantly grasped it, if you'd presented them with a vision of a "cell phone" world, much less a "smartphone" world...
MBlanc46
PS “[T]he Keirs”, not “the Keira. Bleeping autocorrect.
Moderator
PS: Oops, to Alarmist, I meant ".. didn't know that they wanted *payment by cards* only ..."
MBlanc46
PS I’ve been a smart phone user since SEP 2021. Mme B insisted that I take her old iPhone and sign up for a family account when I drove from Chicago to So Cal last autumn. I only use it to talk, to text (when the recipient is a “text only” type), and to use Google maps. I don’t always hear the little ping when someone sends me a text message, so sometimes it’s days before I see a message. I remember the days when you had a black Bakelite phone wired to the wall and a cord connecting the receiver to the cradle. When you picked up the phone, if the Keira weren’t on the party line, a pleasant feminine voice asked you “Number please?” I’ll admit that the bells and whistles that the new gizmos have do provide some functions that our circa 1952 telephone didn’t have. For example, you couldn’t take it to the supermarket and call the missus if they didn’t have the exact product that she’d specified. However, offer me 1952 social and political conditions in place of Clown World, and I’d take it in a heartbeat.
Moderator
PS: My wife is really coming around quick on that, Alarmist. Perhaps her hours on youtube are paying off. Seriously, I never thought she'd come to almost BEYOND my point of view, from not giving a rat's behind about it all only about 3 or 4 years ago.

The folks at the Chipotle at the airport had a jam up due to missing one employee. You really gotta have 3 people on that line, or it gets backed up and stupid fast. Anyway, I will say honestly that I did not know they wanted cash only, as that's not the case usually, and the sign was way over to the right (where nobody was ringing anybody up for 10 minutes).

I came out with my "well, it's the law. You gotta take it." The guy who was switching from preparing food in the back to finally ringing people up told me "I'll get you going." It was one of the other 2, a girl at the register though, and she did at least take a fiver (just that cheese and chips) from me, but couldn't give me my 40 cents or so. I'd say in my younger days I would stand there till I got it, but I try not to be that way anymore - they were working hard too, with what they had.
Moderator
PS: The first question was supposed to be like that "tree falling in the forest" thing, Adam, but I guess the analogy doesn't work.

Re the 2nd, I added a bit more, BTW. This goes along with my missing the ability to slam the phone down, if it comes down to it. I wrote a post on that. Don't try it now - new glass is a hundred bucks. OK, maybe you can do it on yours. I hope the oldie-but-goodie works for you for a long time.

I used to do the #MIN# thing on a T-mobile phone, as I recall, back when one had to keep track of his minutes. So, I should say that I don't like to be bombarded with these texts from Big Biz is all. If it's my choice, OK, I do get the idea sometimes.
The Alarmist
PS

The only “smartphone” I carry is the one for the job, and half the time I leave it at home. As much as I’d love to photograph my lunch, I get along just fine with a flip-phone with no GPS ... let them do the work.

They closed down the cash point in the little town near us, so if I want to draw more than a few hundred Euros, I have to drive to the next town. Too lazy to do that, I asked Mrs. Alarmist to float me some cash, so she says, “Oh, you can ask the store to give you cash back from your debit card.”

Mrs. Alarmist is a merchant banker, and believes in these things. I only use them as a last resort, so I tell her I prefer to pay in cash for everything. She asks why, and isn’t satisfied with the answer that they’re going to have to work to track me, I’m not going to throw open all the windows to my world.

“Does a smart phone make a text if there's no human to receive it?”

Yes. Yes it does.

To check the balance on my phone I text BAL to 7243 and then a computer sends me a text with my balance and expiration date.

“Should it still feel good to show one's anger by text message if no human gets it?”