Tooting our own horn #1734 - Communication Breakdown

No, OK, we don't do it THAT much. I was about to write "#2" since, the last such incident was in out post just this past Friday, Ann Coulter/Peak Stupidity Synergy, but I'm sure there've been a few other instances.

Why do we toot our own horn this time? It's due to a portion of the Kung Flu stupidity that I gotta say I have not seen described much anywhere but here on Peak Stupidity. That is the communication breakdown brought on by this stupid face masking business. Yes, it's going away (for now?), but again, the point here is to toot our own horn, so ...

"The runway's yours, young lady." 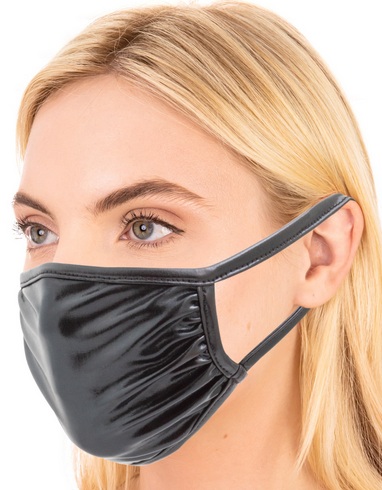 This is not just some minor side issue (that adds to the indignity of it, the likely health issues, and above all, the Totalitarianism of requiring them). It's a problem in my workplace. I haven't seen any training materials with the "communication is IMPORTANT" bit on there lately - hmmmm - but that's always been a big mantra. These masks do matter when it comes to communication. Peak Stupidity has interspersed our many, many anti-face-mask posts with anecdotes relating this problem. See Lost Comms - - Lost Comms - Immigrant Version - - and the first of the 3 anecdotes in Face Masking anecdotes for the week, the latter from late this January.

The post that the picture of the (probably, right?) cutie above came from, is just one that Moar fashion accessory anecdotes notes this problem, with these newer black nonwoven ones even worse than the rest:

The thing about these ones is that, even though they don't fit tightly at all on the user, they are EVEN WORSE for communication through. I wrote "through", but then, they seem to have a big gap on the top side where sound should come out well. (They are almost semi-circular at the top, leaving a gap to the portions of the face there.) I'd thought the thick cloth ones were the worse, especially on black ladies, but the sound must bounce around a bit before coming out, and these are terrible.

Maybe communication is not as important at work as we have been told, and it's all about fashion, except that these are ugly too.

Now, just yesterday, from VDare writer A.W.Morgan I got a little bit of back-up on this issue.* It's not that I don't KNOW it's a problem, but who else has been saying anything?

Mr. Morgan's article is about black dysfunction, not about the face masks, but they are involved in the story he reports on. This title was nice as Mr. Morgan noted that what are described by the Lyin' Press as "fights breaking out" should be more realistically described as "pitched battles"! However, due to the location of this pitched battle, I would have titled it "Showdown at the Golden Corral". I mean, when are you going to get another chance? Scratch that, the way things are headed...

It's a short article about one of VDare's frequent topics -Another “Pitched Battle” At Golden Corral In Florida—And More Not Reporting Race. The inner blockquote is an excerpt from a Daily Caller article, with my bolding.

Amusingly, the Caller found a witness to say the cause wasn’t out-of-control blacks who fight at the drop of a hat because one felt “dissed.” Rather, he said, it was the Flu Manchu and face masks:

Police are investigating a massive brawl that broke out inside a Bensalem, Pennsylvania, buffet Friday evening.

Customer Alexis Rios said the fight was started by a steak-related misunderstanding, according to WPVI-TV. The customer in front of Rios was reportedly upset because his well-done steak was taking longer to prepare than Rios’ rare steak.

People had a hard time understanding each other due to COVID-19 face masks, which escalated tensions, Rios told WPVI-TV. “With COVID right now, masks and everything, nobody can hear nobody sometimes.”

After a quick translation of the ebonics using bingbonics, I have to agree with the speaker. It's even worse for the English-challenged among us, which pretty obviously includes this Alexis Rios. Mr. Morgan adds:

Chairs flew because face masks made speech unintelligible? How about taking the mask down momentarily so you can understand each other, instead bashing one another over the skull with chairs because of a “misunderstanding.”

Well, yeah, that's what we do most of the time at the workplace too. I really don't think Miss Rios and the rest of these chairfighters at the Golden Corral that day were worried about the Kung Flu. However, some people are so used to these stupid things, or too lazy, that they won't take them off to make themselves clear.

It can become a total Communication Breakdown. It's driving me insane ... take if from here, Jimmy Page!

Do I really have to introduce the band here? Fine, OK:

The song is 53 years old, from a time of better musicianship and lower stupidity levels.


* That just may be because I don't read the whole internet every morning with my breakfast. Really, I do just hang out in a small niche of the internet. (See also Part 2.)

Sorry for the vague reference. My legal training is waning as I get older. Don’t ask about my egineering skills, which are now forty years old ... I just spent too much time extracting a stuck screw from my bike seat.

Ugh!
Moderator
PS: For the rest, Alarmist is not referring to my image of the cutie, but the image at the top of his link. (May be obvious, but it wasn't to me.). Thanks, Alarmist. I'll save that one.
The Alarmist
PS

This link is largely for the graphic at the top of the page:

Moderator
PS: Yes, Robert, STEK "wants a world where all user can communicate whilst wearing a face mask." I'm guessing even the marketing people don't live in America. But grammar isn't the main problem. Wearing a mask that lets your baby see you as some type of jungle bird might be ... in the long run.

I wish I could read lips, though. It helped Charles Bronson out in one of his (Death Wish?) movies, and then there was that Seinfeld episode that showed us its value in espionage.
Moderator
PS: I guess that's part of it, Alarmist, keeping us isolated from each other except for on-line. They'll have a good handle on controlling the latter really soon.
Robert
PS:

The problem is solved!

I am going to guess that this was not made in America:

Our Clea Window mask Smile Protector is started many thought that story from People who are deaf or hard of hearing. Due to facial expression cleary shown, it can widley use for Interpreters and language learner, Teachers and students , Welfare house and community. It helps user to break communication barriers by reading lips.

There are just no words any more to express my feelings on this, but if there were, nobody would understand it through the muzzle they seek to impose on us.