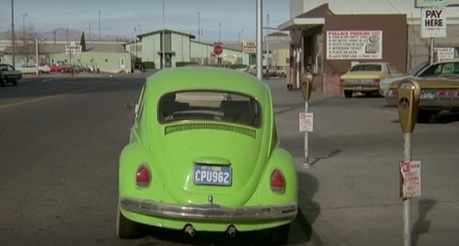 Please bear with me, readers, as more stupidity is forthcoming. This is not a pro-TV site, by any means, no, not one bit, but I like these old re-runs. It's kind of an escape from Stupidity. It's not just the cars ... but, that part is fun.

In the last episode of Season 1, called , I finally noticed an AMC Gremlin for sure (I may have missed some before). I have not seen a Pacer, but that makes sense, as I looked it up, and the first model year was 1975, and I've been watching shows from Spring of that year. (They probably make the shows earlier though.) I saw a Ford Pinto, but it may have been a Mercury Bobcat (same damn thing).

In the show, at one point these two bad guys grabbed the girl there in Vegas and drove off with her in their land yacht, a red new model Lincoln Town Car, so Jim went to the girl's car to chase them. But, well, he looked at that lime green VW Beetle, fumbled with the keys in his hand for a second, and just walked back inside. Haha! I guess that was intentionally funny, but it was very subtle.

What was even funnier for me watching this 47 years later is another scene with the same two cars. This time, it wasn't a chase, as Jim was tailing the Town Car with the two bad guys and the girl in it with that lime green bug (he might not have wanted to rent a car, as his customer was really tight about the expenses). But, but, they were the only two cars going down this small road, and the guys in the Town Car didn't notice him. I think the viewer at the time was to think that, well, they might notice that car behind them, but, shoot there are LOTS of lime green bugs, so, whaddya, whaddya [h/t, iSteve], gonna worry about every car behind you? I don't think even in 1975 there were just Billions and Billions of lime green VW Beetles! Were there?

Anyway, in the comments of the last Jim Rockford post I wrote that there were two very direct obvious jokes right together in an earlier episode of the show, and I couldn't remember the first joke. I scanned through yesterday, found the gas station scene ("Fill it up - ethyl." "My name's not Ethel.") and backed up to find the other one.

This was great. The girl that Jim had just questioned at her apartment - people always just opened the freaking door*** - called up her colleagues in the insurance scamming industry right away. She was using a fake Polish sounding name, and the upright insurance guy Jim had talked to said it was definitely pronounced a certain way, while the lady herself insisted it was pronounced differently. She's on the phone with one of the guys and is complaining she needs OUT, now! I will play it right now, so verbatim:

"I want out. I am sick and tired of this name, I, I can't even spell it, nobody can pronounce it, and I'm fed up with Polish jokes! Now, when do I get the new ID?"

See, if they still made TV like this, I might pay 10, 20 bucks for cable. Where do you round up all the cool cars from though?


* Sorry, I didn't know the model and didn't pause to look for emblems. I can't make out the name on the driver's side rear quarter panel in the image above. I shouldn't have been so lazy, and I should have gone to the IMDB page.

** You see many, many Beetles in the show, along with quite a few VW vans, which is quite realistic. Again, they didn't need to arrange all of that scenery. That WAS America in 1975.

*** That last episode had a running gag of Jim putting his foot in the door, when they'd try to close it on him. The first time, when Jim's foot was hurting there, the lady goes "if you're gonna do that, you need to do it right". LOL!

No worries. It's not really laziness to not spend time looking up something so inconsequential.
Because of my curiosity I downloaded The Rockford Files S01E23 “Roundabout” so I could get a better look at the car.
Once I determined that it was a Lincoln, I started looking at different cars they made in 1973,4 and 5.
It was only after I figured out that it was a Town Car that I happened to find “The Internet Movie Cars Database”.

Anyway, I hope you have a great day.

☮
Moderator
PS: Thanks for the info, Mr. Smith and for the recommendation, Alarmist. Regarding the old VW's, vans and bugs, regarding the latter, it seemed like you didn't meet many people whose 1960s or '70s families DIDN'T have a bug. We had one. It gets pretty hot in the luggage area in the back, where my sister had to ride. My parents didn't want to hear the complaints. "It'll cool down once we get moving!"

I enjoyed the movie, but I tend to enjoy Tarantino’s twisted view of things. I don’t want to spoil it, but it loosely tracks actual history in parts, with an interesting twist at the end and enough absurdity to be funny.

My brother had a Bug ... the darned thing seemed like it turned into a powered sled in snow.
Adam Smith
PS: Good afternoon, gentlemen,

☮
MBlanc46
PS That takes me back. I droves VWs for about 25 years, until I wrecked a knee and couldn’t drive a standard transmission vehicle for a while. I had half a dozen or so Beetles (I’ve lost track of just how many) and a couple of microbusses. Never a lime green one, though. I would have been driving the 1966 maroon and white microbus in 1975. We’re still at the winter Blanc House in the Non-Rust Belt, so we occasionally see a vintage vehicle. A week or so I saw a 1960s VW bus (still had the divided front windscreen). The body was in good shape. That made me yearn for my youth. These Asian made cars are sure a lot better than the American iron of the 1950s and 1960s were, but I’d take a ’55 Chevy over any Toyota or Honda any day.
Moderator
PS: I don't care a whit about Hollywood, but I may have to get that movie for fun, Alarmist. Would you recommend it?

I remember the kids driving their Mom's big land yachts with one finger. The power steering was so light in those things.
The Alarmist
PS

I watched Once Upon a Time in Hollywood over the weekend, and there’s this one scene where the 405 is the emptiest I ever saw it in my life (must have been really early, or they paid through the nose), and they had quite an assortment of old vehicles in good shape. They apparently sourced 2000 vintage vehicles for that movie.

I pointed out the Coupe de Ville and told Mrs.Alarmist my first car (Chevy Impala) was about as big, though not as nice, and she said, “Oh my God, it’s a Panzer!” (Strange to hear a European say “Oh my God” almost like a Valley Girl, but it fit the moment, though it is probably proof I have exposed her to too much American culture.