Is the Russia/Ukraine War another piece of Infotainment?

There are way too many articles/columns with questions for titles*. In this case, I do this because I'm really not completely certain here. 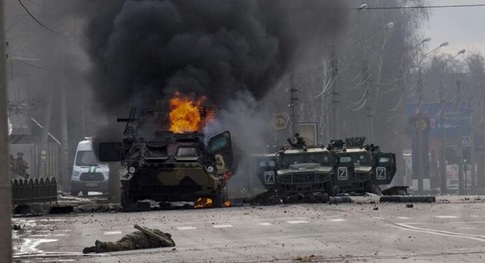 The timing of this all-encompassing (of people's time) BIG STORY of the Russian attack on the Ukraine is suspect to me. If the Kung Flu itself has not run its course, but it likely has long ago, the Infotainment PanicFest seems to have run its course. I don't see nearly as many headlines with the words "cases", "Covid", "Delta" "whatever the next new one is" in them. "Russia", "Ukraine", "nuclear weapons", yeah, more of that.

Then there was the story that I and other patriots DID CARE about, the Canadian truckers protest, something I hope still will lead us down the road to more resistance to Globalism. I don't read much about the final disposition of it all. Will we read headlines about lawsuits won by truckers for their confiscated driver's licenses and rigs and basic rights violated? I don't think so. I think the Globalist elites want that sort of thing to be memory-holed.

The reason I ask a question in the title is that I am not sure whether this war has been purposefully made into Infotainment in order to squash the growing ideas of rebellion, and I don't know whether this war possibly DOES deserve being THE BIG STORY.

Yes, there are nukes involved. They are on the Russian side only, the Ukraine having given up their weapons per the Budapest Memorandum in 1994. The terms of that agreement, with the West guaranteeing security in return (but nothing about the country joining NATO) are another discussion. If the West were to stay out, though, there would be no nuclear stand-off** so it's not 1962 again.

Secondly, is the story big because "white people like us are at war"? That question has been brought up, both by those for whom it is a reason to follow the story and those who think that's all racciss, and you can't go around thinking like that. Personally, I'd agree with the former to a degree, and isn't this as important as the Rwandan civil war in the 1990s in which lots of Africans died, and we heard about it every day? Whatever happens is not that all important for us here, is it?

I lean toward this being, yes, another piece of Infotainment.*** It's a big enough story to be in the news, but it seems to have taken up all media's time. Perhaps just the timing was right, and like the Kung Flu PanicFest started just over 2 years back, it's again about not letting a "crisis" go to waste. Is this a crisis for America? NO. Neither was the Kung Flu virus.

What are some crises for America? Well, lets's see, a big and accelerating population replacement program by the Feral Gov't (even including Human Trafficking by the Presidential Administration), the accelerating destruction of the US dollar and the 1970s-style inflation back with us, and the anti-White man and anti-traditional-America Cultural Revolution on in full swing are crises. More overarching is the Globalist and Communist elite's purposeful encouragement of all that and more, for the purposes of eliminating the vestiges of a Middle Class. ...

When the actual people try to make an effort beyond the futile ballot box to do something about it, ... well, where's the story? I'm not reading much without making an effort.


A small part of the American convoy, getting started. 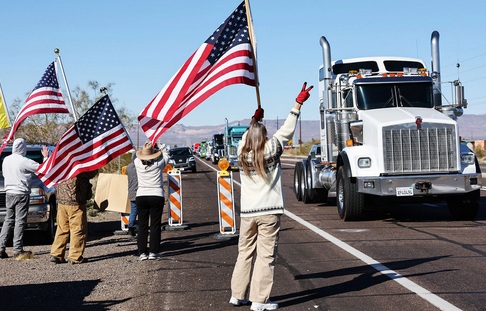 If I were the suspicious type, I'd think the American Lyin' Press' fixation on all things Ukraine and Russia is a way to bury the story of the American convoy nearing the Federal Shithole as I write.


* An Unz Review commenter says that any writing titled with a question will explain how the answer is NO. He explained it pretty well and even had a source and some term for this. It could take me a while to find that one ...

** Did the West then leave the Ukraine in the lurch? Again, that's not Peak Stupidity's area, when, after all, our goal is not to write about this!

As the old anarchist slogan goes:

War is when the government tells you who the enemy is.

Revolution is when you figure it out for yourself.

No Russian ever called me "deplorable".
MBlanc46
PS Everything is infotainment these days. Or, to use an expression that gets a lot of use by Severian over at Founding Questions, everything is Fake and Gay. Electoral politics, the Plague Panic, the Ukraine war, whatever their next wheeze is, you name it, it’s infotainment, it’s Fake and Gay. That’s the postmodern condition.
Moderator
PS: They are doing such a crack up job here, that we're sending teams of American BP agents to INSTRUCT others how to do it ... wait ...
The Alarmist
PS

I for one am grateful that America’s best and brightest have finally decided that some borders are worth defending.

A journey of a thousand miles begins with a first step, but our betters go that extra six thousand miles for good measure. I guess they are using Ukraine as a beta test for the future Rio Grande Anti-Fascist Rampart, but it doesn’t seem to be going so well.