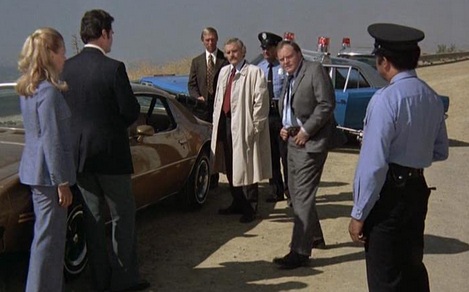 Peak Stupidity wrote about our enjoyment of Peak Rockford Files a month and a half back. Peak Rockford Files, the James Garner detective show set in Los Angeles, California, was likely at the beginning of the show, MCMLXXIV, oops, that's the Roman Numeral for 1974, as you have to figure out at the end. I don't' know for sure - I'm still reviewing Season 1.

We've got this topic key here TV, aka, Gov't Media obviously for the propaganda out of the idiot plate, formerly idiot box. From my long-term memory, and now from my current watching of about 1/2 of Season 1, I am very thankful this show had not much of an agenda, just entertainment.

I found the most fun show yet in the In Pursuit of Carol Thorne*. This was Rockford at his and its finest. The character Jim Rockford does honest work as a private detective for 200 dollars a day (plus expenses). He has been in "the joint""**, so is worldly-wise and has picked up on the ways of criminals, making him hard to fool and a good detective. However, he comes across quite shady himself often.

This episode is great because everyone in it is a con man. Jim Rockford's (very pretty***) suspect, just released from prison, was one Carol Thorne, who Jim was hired to follow to lead him to an elderly couple's missing son, as his former girlfriend. Not only is she a con artist, just as clever as Rockford, but both of the supposed parent's who hired him turn out to be con artists as well.. Their alleged son turns out to have also been a party to the big robbery committed by the whole lot of them.

There are the usual car chase scenes, but when the whole group, on the way to catch up with that stolen million dollars, gets pulled over, we get the hilarious scene shown above. (Of course, you'd have to watch the show.)

What I really like is that the guy (the missing "son") that the other thieves and Jim Rockford see as the most naive and stupid of the crew, is seen at the end as the nicest and most honest. OTOH, I think Jim will have some benefits coming from Carol Thorne at the end too.

Just looking back and forward from this episode, I really liked looking at the early '70s cars in a previous one. They've got cool old cars in every episode, of course, including Jim's Pontiac Firebird. The episode I refer to had Rockford being followed through a parking garage and then losing said tail in an outdoor parking lot right after that, during the beginning of the show. Man, one in 10 cars is a VW bug, and the rest are huge land yachts! I don't know all the models, but this show is a classic car lover's dream. I mean, they weren't set up there - those were the cars around 48 years ago.

I also saw the 2nd use of a light (single-engine) aircraft in an episode shortly after this one, the first use being in episode 1, as described in that previous post. In this case it was a 180 Hp Cherokee that (STILL!) goes by the tail number N3620R. (I looked it up, and of all things, it's owned by someone out there in Temecula, California - town (well, city now) whose name I first learned of from, yeah, The Rockford Files.) Cool! The episode didn't have details, but Jim hired someone to fly him to somewhere in the desert between Las Vegas and Los Angeles, where a car, OK, another land yacht, was set up for him to chase down the 2 young lady con artists hauling ass on this route with some loot. The transportation in the Cherokee and landing in the desert**** was his way to get well down the road ahead of them.

If I ever saw this stuff, I have completely forgotten it. This is very enjoyable. Why have cable TV or even a receiver and be subject to the Gov't Media agenda, when you've got the old America of The Rockford Files?!

* This was well before The Pursuit of D.B. Cooper, a 1981 movie made as a fictional account of the rest of the story of the real D.B. Cooper, whom Peak Stupidity covered exactly half a century later here.

** He was innocent of the charges, as he mentions often, and had been pardoned by the Governor. Hey, that would have to have been Ronald Reagan. Way to go, Ronnie! Trust, but verify.

*** As it the usual thing at Peak Stupidity, I really couldn't care who the cast are. This lady was pretty then, she's old or expired now, so what difference does it make?

Moderator
PS: Oh, and Mr. Anon, that was funny about the nursing home.
Moderator
PS: Gentlemen, I will keep "Maverick" in mind, once I run out of "Rockford Files" episodes.

For Mr. Anon, I just saw Gretchen Corbett (Jim's usual lawyer) in the next episode. My point is not really "the hell with these actresses - they're old now." My point it just that whoever they are, Gretchen Corbett, or any of them, I don't really care to follow them, or wonder what they appeared in next, etc. I don't care later who the actresses were. Yeah, if they are hot in those old episodes, that makes the show all the better to watch.

I will, say though, that this re-formatting the show to fit my screen bit, very understandable, don't get me wrong, makes it where some of these women's figures are hard to figure. Changing from 4:3 to 16:9 makes everyone 33% wider! I think I'd rather have the black bars on the side.

OTOH, maybe that's why the cars in the show look even more land-yachtey than I remember from real life, and the Firebird that much sleeker.
Mr. Anon
PS

"The episodes, 2 I think, where Tom Selleck is Garner's super handsome, perfect, can-do-no-wrong rival is absolutely hilarious. Garner had a gift for self-deprecation which is ironic considering the source."

I agree - that one was a stand-out too. As a rule, I always liked the episodes with Rockford's hapless ex-con pal, Angel - "C'mon man!" (now we know where Joe Biden got that). I also liked the ones with Rockford's defense-attorney friend, Beth - but just because I dig Gretchen Corbett:

"As it the usual thing at Peak Stupidity, I really couldn't care who the cast are. This lady was pretty then, she's old or expired now, so what difference does it make?"

Whenever I mentioned to a friend of mine, my appreciation of some actress from an old TV show or movie, he'd always remark "She's probably a toothless old grandma now."

Dude, why would I care? Her beauty was immortalized on screen, and can still be appreciated. It's not like I'm going to seek her out in her nursing home for a quickie. Needless to say, this friend is not the most socially-sensitive person I know.
Ganderson
PS Mr Blanc, Maverick was great.
simit Rockford and Maverick: Garner, great theme songs, and Roy Huggins as one of the producers
“Who is the tall dark stranger there, Maverick is is name…”

In addition to Jack Kelly as Bart Maverick, Roger Moore played Beau Maverick, who was a cousin.

Mr Mitchell: the two episodes are “White on White and Nearly Perfect” and “Beamer’s Last Case”, with James Whitmore Jr. and Simon Oakland.

My favorite moment, and I can’t remember which episode of the two, was when Lance gets shot and his sports jacket gets bloody, he goes into his trunk and pulls out a new sport coat, still in the dry cleaners’ plastic which perfectly coordinated with the rest of the ensemble. Class!

michael mitchell
PS The episodes, 2 I think, where Tom Selleck is Garner's super handsome, perfect, can-do-no-wrong rival is absolutely hilarious. Garner had a gift for self-deprecation which is ironic considering the source.
MBlanc46
PS James Garner was and always shall be Bret Maverick. Maverick certainly is on the short list for the best television Western ever. I’d say that it was number one, at least the episodes with Garner. Gunsmoke was pretty good, too, especially the early episodes with Chester (Dennis Weaver), but sometimes it took it self too seriously. I started listening to it on the radio before we had a television. As a teenager, I sure was taken with Miss Kitty (Amanda Blake). Westerns perhaps aren’t the most profound literature, cinema, or television, and their portrayal of the American West was generally far from historically accurate, but the better of them were good entertainment and gave at least a hint of was the frontier was like. Of course, we can’t have them anymore, because white guys were the heroes and the settling of the West was portrayed as a good thing. Sorry to be off topic, but any mention of James Garner takes me back to Sunday evenings (I think that it was Sunday) circa 1960, when America was a real country and Maverick was on TV.
The Alarmist
PS

My guilty pleasure the last couple of years when visiting the US is watching Charlie’s Angels ... not so much for the Angels, though I still have a thing for Cheryl Ladd, but to relive the days when fist and gunfights between the gals and the bad guys were cheesey at best, but more often than not resulted in at least on Angel putting up only token rsistance before being taken prisoner, leaving one wondering how the rest of them were going to save the day. Bad as it was, I miss ‘70s TV.