The Matriarchy - what can't go on, won't go on.

Yeah, but for how long do we have to put up with it? 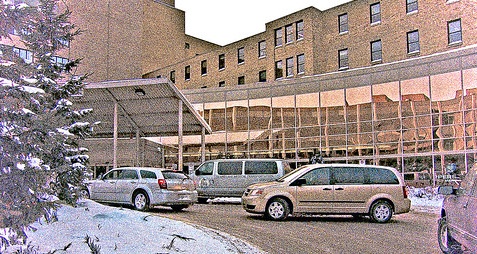 (I couldn't find a really representative file photo. It was much nicer outside but much busier too.)

I'd have saved 55 minutes of the hour I spent doing to the hospital for something if it weren't for those damn HIPAA laws. Again, mission creep is the problem, as I thought it was to apply only to the health care of female hippopotami. Nope, it slows us all down, not just the hippa. These people can't email stuff to me. Therefore, as far as medical records go, we are back living in the world of 70 years ago, at the earliest time of the widespread use of the automobile.

I've been through that, so I knew the drill. It's just that I'd promised my boy we'd do something together in an hour. OK, it was all good until my arrival at the hospital complex. It's a big place. There's some parking, but you've got multiple speed bumps* and stop signs, and... ridiculously ultra-cautious people who made a traffic jam out of thin air.

I! GET! IT! There are sick and injured people walking slowly, some not able to get out of the way. There are some steps leading up to walkways with bushes blocking part of the view. (Whose idea was that one?) You DO have to slow to 20, even, 15, mph here and there and keep your eyes on a swivel. What you don't have to do is stop for 10 seconds at the signs and go 2 mph over the speed bumps. Imagine if I were in a real hurry... inside an ambulance. I didn't see any way ambulances could get around this, as this 2 lane street had nothing but curbs lining it, and cars everywhere.

Why the title here? My slight hassle is just one small result of the Matriarchy we are living under. Women make these ultra-cautious rules and are the enforcers of it. They are the ones complaining at the neighborhood meetings that we need MOAR 4-way stop signs! (You can't even get through my neighborhood in one direction any faster than a bike now, well, when I run the stop signs on my bike, which, hell, they don't like either!)

Woman are running the neighborhood groups (or men who wan't resist them on anything), running the government offices, running the universities, running the lots of Big Business, overwhelming lower education, with almost all female teachers but the gym teachers where I am.** As I walked into the hospital (a brighter story, for the next Kung Flu stupidity post), I noted how woman-dominated these places are. I'd guess 9 out of 10 people working there were women. OTOH, I didn't see any doctors. Perhaps they were all out at the golf course, and honestly, who can blame them, with all this?

Unnecessary traffic jams, extra stress, but I guess there was a 0.1% lower chance of someone getting hurt on that road. The road can be pretty safe when nobody's moving. That's it in a nutshell. We are all a tad safer, but stuff can't get done, and there's no advancement of society under a Matriarchy.

* Peak Stupidity has already discussed this in Sport Utility Drivers - GET OFF the ROAD ..., with a follow-up post - Speed bumps and phone freaks.

** I don't say they are all headed by women, but I pity the man who resists the overabundance of caution and takes some risks, even if he is nominally in charge. The way it works is, you can't go wrong making a mountain out of a mole hill. It's called "zero tolerance".

Moderator
PS: We sure like the same music, Dieter. I got really into that Steve Sailer Neil Young post.

I agree, Mr. Blanc. I have not read Lewis Mumford's "The City of History". I assume you recommend it?
Moderator
PS: Great traffic stupidity analysis, Alarmist. I don't how many people get that "car on the right goes first". My problem is usually people that are just too damned indecisive to do anything at the 4-way stop. I'll wave someone through - right or left, I don't care - then they still hesitate 3 more seconds - OK, that's enough! I gun it through there. "Clear the intersection!" that's my motto.

Then there's the guy at the 3-way, across from me, with two options, straight or left. He's got no signal on, so I go through. Now he's laying on the horn because he wanted to go left. He should have told me. There ought to be some kind of electrical way of ... never mind.

I do like the 4-way stop California U-turns that I'll perform if I'm in the short-turn-radius vehicle and no one is around. That means, especially cop cars, though, I use the term "California" in all these maneuvers for the sake of informing the officer "well, this is what you do in California. It's OK there. I didn't know ... I've only been here for, uhh... [quietly] 30 years . "
MBlanc46
PS Women have their place. [Insert smart-aleck sexist remark here.] And a very important place it is. What women don’t want to recognize is that men have their place, too. Hence, the downward course of Western civilization, since men gave women “rights”. Lewis Mumford, in The City in History, suggests that with Matriarchy, humans can’t advance (I realize that that is a politically incorrect concept, but too bleeping bad) beyond the Neolithic. “The pleasures of the belly and the genitals”, as he puts it. The subtitle of this post is certainly appropriate. It can’t go on. For ever. But I fear that it can go on for quite a while, mostly because the men won’t step up and put a stop to it. And in that while, considerable, probably irreparable, destruction will occur.
Dieter Kief
PS

Hehe - uuuuuh - stinky territory. Aaaaah.
SHTF - is well known over here in the south to all avid Unz-Review commenters (both of us, hehe) , because most comments make no sense if you are not able to understand this one. - Well - all of them, I think from time to time. Then I laugh. - Unz is manly territory.

Kacke am Dampfen, Alarmist, is a saying that is interesting in that it can be heard in Germany from Nürnberg over Schweinfurt (höhö -pigs ford!! - stinky business again!) - over Göttingen up to Bremen and Hamburg. But not in the South-West.
This is for sound reasons, because in the south-western dialects,this expression - just does not swing - and is therefor gmieden wie dei est - avoided like the Black plague, hehe - gruesome again!

You're on the right track with The talking Heads, but not quite, I'd hold. 50%.
David Byrne is talking quite a bit lately about his spergy state of mind. To me this is a bit like an albino confessing he is white - about twenty years after first having met you.
Very strange, hehe. Ok - full circle (now I laugh - hehe - - ! - you know laughing and crying sometimes it's the same relief (Joni Mitchell) - ...Laughin' it All away... (People's Parties / Miles of Aisles).
The Alarmist
PS

I wonder when the EU Matriarchy is going to get around to replacing all the “Right before left” intersections in the EU with four-way stop signs.

Most Americans would have a difficult time having to actually pay attention to the fact that the guy broad-siding you from the right actually had right-of-way and you were supposed to give way. It makes the “California Roll” look like a trivial concerm. Be glad you have four-way stops to lighten the thinking load while driving ... it makes it easier to text while driving.

WTSHTF = Wenn die Kacke am dampfen ist (which strikes ma as actually closer to “When the shit is steaming.” Maybe Dieter can give us better insight into this colloquialism.)
Moderator
PS: Dieter, it's really hard to use links here, I will admit. I take it your reference is to the Talking Heads, and would that be "Life During Wartime"? That's one of my favorites.

I'll look up that Tom Waits song.
Moderator
PS: That's what all the serious preppers say too, Dieter. Besides "beans, bullets, and band-aids!", there's also "community, community, community!". However, I'd rather be in a community with the kind of people that have a chance of understanding what's coming and the political views to not support the latest Commie when the SHTF*.

Lastly, I would have picked Montevideo over Buenos Aires, Dieter, just based on recent history AND demographics. Uruguay is 90% white - that is Spaniards, Italians, and Germans.


* I don't know how that translates to Deutsch, but it's "Shit Hits The Fan."
Dieter Kief
PS

https://www.bing.com/videos/search?q=tom+waits+in+the+neighborhood&view=detail&mid=1895BAD8C31141B02E921895BAD8C31141B02E92&FORM=VIRE0&ru=%2fsearch%3fq%3dtom%2bwaits%2bin%2bthe%2bneighborhood%26form%3dANSPH1%26refig%3dad245875292d4be6a3627e5aae8fe76b%26pc%3dU531
Dieter Kief
PS Hey Mod. - welcome to the real world!The neighborhood thing is real, you're right. Long story short - one of the great well known widely read German economists and catastrophe (dystopia...) warners fled a few years ago Germany be in a safe harbour when Germany goes down (he predicted that it would, because - it had to- he had Proven it!) and - chsoe Argentina (Buenos Aires), where things got really bad within one year after his arrival in 2013. - See? That's why irony will never die.

OK- on the short track - he moved back to Germany, hehe, and here - still doomsaying, was asked in an interview: In case the real crisis hits, like, no banks open, supply chain down, etc. pp. (water, electricity - the first burglars visiting - now comes an important word: your neighborhood  (see) at night...The interviewer, well know mildly anti-panicker Roland Tichy, a vital and not dumb at all man from the Bavarian hinterlands so to speak, who runs a succesful pblishing house and a magazine and a website (Tichy's Einblick) - Roland Tichy asked him, what he learned in that crisis,and here's with what he came up: The most important factor then - are your (you've guessed that  by now already, didn't ya, Mod.?) - neighbors. - So: Be nice to them. Do them favors - also those you  don't particularly like, because in a crisis, these are your most valuable and most needed and most effective contacts. He was astonished, how the crisis after day three or five did eradicate the differences we usually make between good and bad people. and the crisis eradicates this difference fast. Our long held dear differences don't count much when we are in need.There is an American novelist who does get such basics btw..

Thus his novel Freedom, about the liberal and nice and all Berglund family, starts off with a great scene about the - neighborhood, and how it was looked after and cared for in a very uplifting and - hehe: nice way by Patty Berglund - - - who looked upon this neighborhood not so much as something that has to serve her biases or preferences (even though she is a liberal) - but rather something that is more important than her (and the limitations). -She spreads the social seeds - between all people living there: Including the Republican leaning and- what is even more important - rather blue collar neighbors.