The Liars of Yahoo 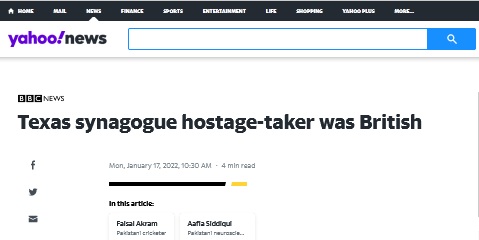 There is a little bit more I wanted to write about that yahoo headline resulting from the purposefully dangerous Bai Dien Administration's open border policy.

The whole "British Man" or "Texan" thing as used for some foreignest-of-the-foreigners is old news, sure. We are quite used to those lies of omission, and it's become a big joke. We may chalk them up just to political correctness type duplicity, but yeah, they ARE lies nonetheless. We get around them by reading past the headlines, maybe down to paragraph 28 if it's the NY Times, finding a picture, or just figuring if t it doesn't say "white" anywhere in the headline or early on, it's not someone white.

However, this yahoo headline was a pure lie of wrongful substitution - my term, meaning a plain old lie. They didn't write just "English citizen" or "UK man". When we see "British man", anyone who doesn't really believe the complete blank slate/magic dirt theory, and not many inherently do, would have a picture of John Derbyshire, Prince Andrew, or a member of The Kinks in his head. That "British Man" description was in the headline, mind you, and a lot of people just scan headlines. I noted that there was NO PICTURE of Malik Faisal Akram nearby the yahoo article.

This lie is purposeful to make us think that the terrorist in Texas was a man of British ancestry, rather than a Moslem man from the UK. Writing "Moslem man from the UK" in the headline would have been honest. Of course, we don't get honesty, as it IS the Lyin' Press after all. We didn't even get the tip-toeing-around-the-truth lies of omission this time. Without naming the guy, yahoo could have written "...was from the UK" "UK Citizen...", or yeah, "... from Blackburn, Lancashire.", the thing that got me started on that previous post. They could have still fooled some of the people some of the time.

The way the site reported journalized this, the casual yahoo news reader scanner of headlines will have in his head after this is "wow, so some British guy this time. Yep, as they say, you never know, it could be ANYONE. No wonder they feel up grannies and toddlers at the TSA lines. Better to be safe than free errr, sorry."

(The back-up or co-singer that chimes in at aroud 3:10 in the video is - unhinged and fancy free (vogelwild (=birdwild) in German) - PAAAAH! - Jimmy Carter couln't dupe that - öh - lady - - nor could Barrack Obama, I think...

A bat out of hell - now: Who does not think of Covid?!
So - Meatloaf had been a propeht then? A man of clearvoyance 'n' vision? - - - PAAAAH!
The Alarmist
PS

American citizens can, at least at the moment, come back w/o vaxxes, but still need a very recent test, i.e. within 24 hours of embarkation. The laws of the US still make it difficult to inflict mandates for experimental medical interventions without informed consent, but the rule of law is being eroded daily.

Non-citizen non-residents who don’t meet certain stringent excepts need to be vaxxed, i.e. no tourists or short-term visitors w/o proof of vaxxing. This now includes land and sea entries.

Last year, my wife was an exception as a spouse, but this year Uncle Joe tightened the requirements and separated me from my spouse at the border. I’ve asked for my $450k, but still no response.
MBlanc46
PS A lot of the people who write that stuff really believe it. They really can’t see any difference between Malik Faisal Akram and John Derbyshire, Prince Andrew, and the Kinks. And they don’t want anyone else to see it, either. And for those of us who do see it, they want to rub our noses in the fact that they don’t have to acknowledge it. Our lives would be a lot less frustrating if we just learned to love Big Brother.
Moderator
PS: My opinion on the reason for the emphasis on the "Asian" victims during that particular time period was that, by "Asian" most people figure Chinese (at least in NYC and other places with big Chinatowns), and there was a narrative to be told in which people were pissed off at the Chinese people for "generating" the Kung Flu.

It's a ludicrous idea, but even Ron Unz, no gullible fellow he (well ...) had this idea that President Trump increased hate on Chinese people here for Chinese people do to his using the term "China Virus". That was mostly to bolster his story on the media supposedly burying his own speculation that this thing came from an American lab and was deliberately spread.

Back off that digression, yeah, the media wanted to push that narrative, so it was important to state "Asian victim", show Chinese people, and do this a lot. White victims don't mean anything to the Lyin' Press, anyway, but the perps could be somehow assumed to be White people... by people who don't have a clue in this world.
Moderator
PS: Alarmist, this is totally off topic of yours and Mr. Hail's comments and the blog post itself.

I don't read much news really but just heard that England was opening up, as in neither tests nor vaccination required to enter the country. Do you know anything about that? How about coming back, in that case? I believe I recall you wrote that one would have to have a vax card to get into the US from anywhere (or just by air, which is still pretty much the same problem)?
Hail
PS

quoting myself: "The lack of mention of perpetrator race in the NYC subway-attack case, though, seems more interesting to me."

CORRECTION: "The lack of mention of perpetrator's race in the NYC subway-attack case, though, seems *LESS* interesting to me *THAN THE EMPHASIS PUT UPON THE VICTIM'S RACE*."
Hail
PS

"We get around them by reading past the headlines....or just figuring if t it doesn't say 'white' anywhere in the headline or early on, it's not someone white."

Some racial-political 'kremlinology' has to be applied to the surge of headlines a few days ago declaring "ASIAN WOMAN killed in subway platform attack" and variants. I saw the story from multiple sources and everyone of them stressed that the victim was an "Asian woman."

None of the articles or flash-news-bites mentioned the race of the attacker (who later declared himself to be innocent because he is "God"---or was that the California attacker? Who can keep them straight).

The lack of mention of perpetrator race in the NYC subway-attack case, though, seems more interesting to me. They stressed the race of the deceased almost as if it were the most important thing in the story. What's going on?

I guess it is a carry-over from the fizzled-out "STOP ASIAN HATE" astroturfed campaign of circa spring 2021.

In that case, I suspect there are Asian news-site editors out there who push the issue, and the White-Christian, Jewish, or other non-Asians involved do not have the...moral courage?...to reject the proposed headline/framing, AND once one outlet does it, others then feel compelled to follow.

And speaking of Yahoo News, during the several-month craze about STOP ASIAN HATE, I recall Yahoo being among the top pushers of the barrage of stories. There was clearly a concerted and (in effect) coordinated campaign to do for "Asians" what Black Lives Matter and Elite Media allies in its several periods of peak activity did for Blacks. (Remember the periods of the 2010s when "Black man KILELD by police!" stories kept getting shoved down the great news-gullet of America? Funny that while the deaths probably have still happened at the same rate, we see almost no such stories anymore...)

Steve Sailer often asks who beats whom in diversity-points. One potential answer could be:

Some have proposed that "Asians" as a group have low diversity-points in the USA for one reason or another. This development with the in-unison declaration of "Asian woman!!--killed in subway attack" seems to upset some applecarts there.

Of course there is no magic Diversity Points scorecard, and Steve Sailer always meant the question ironically. What happens is activists push things and see how the dice fall or what pushback they get. It's an ever-evolving phenomenon, the Diversity Points thing, an the point system is never fixed in stone (though Blacks do seem to always get bonus points).
The Alarmist
PS

The act of noticing is rayciss and indicative of Islamomisia (that’s hate, as opposed to phobia, which is fear).

Shame on you, shame on me, shame on all of us who dare to notice or question the official narrative, much less care for the implications of accepting it as spoon-fed to us.