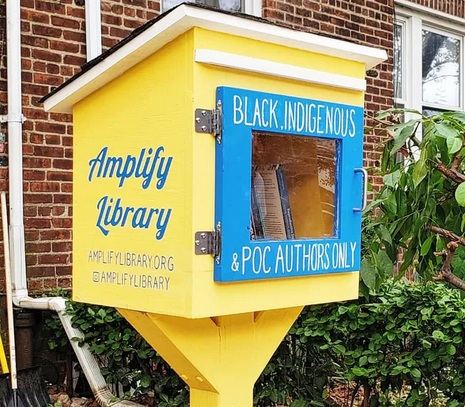 I wanted to write this post over a month ago. I didn't want to just steal Steve Sailer's material on some extreme stupidity here, for which he gets his ideas from the usual NY Times. His post of Dec. 5th, '21 NYT: By Encouraging Integration, Little Free Libraries Are Racist was another great job by Mr. Sailer in logically and snarkily refuting the stupidity of one Erin Aubry Kaplan. I just wanted more. I gotta do it myself. Also, I'm very familiar with some Little Free Libraries - see LittleFreeLibraries in the leafy neighborhoods .

The reader ought to go over and read Mr. Sailer's take first, if he hasn't already, as I will continue the fisking* here. I will include the excerpts he included that discussed the little libraries from the original article, but I'll be damned if I'm gonna click on the NY Times. Hopefully not too much is missing. Here goes:

Is My Little Library Contributing to the Gentrification of My Black Neighborhood?

Ms. Aubry Kaplan is a journalist and author who grew up in the South Central section of Los Angeles and nearby Inglewood.

About a year ago, I decided to build a library on my front lawn. By library, I mean one of those little free-standing library boxes that dot lawns in bedroom communities around the country — charming, birdhouse-like structures filled with books that invite neighbors and passers-by to take a book, or donate a book, or both.

OK, fine, but keep in mind which type of people think of altruistic ideas like this and have the motivation to start building them. (Miss Kaplan could read the Peak Stupidity "Leafy Neighborhoods" post for a clue).

I’d spotted the phenomenon on walks through upscale, largely white neighborhoods around Los Angeles and immediately resolved to bring it home to Inglewood. Why not? A library is not so much a marker of wealth and whiteness ...

It kinda' IS. I mean, unless you're a bum who uses one for shelter.

... as it is an affirmation of community and cozy, small-town camaraderie that Inglewood, a mostly Black and Latino city in southwestern Los Angeles County, has plenty of. We deserved no less.

If that's the basic demographics of Inglewood, I'm guessing there isn't a big, big demand for a library by anyone but you, and, again, some bums.

Prepandemic, Inglewood was gentrifying, another reason I’d been inspired to do the library: I wanted to signal to my longtime neighbors that we had our own ideas about improvement, and could carry them out in our own way. …

Exactly. Since it was gentrifying, there might be a good spot where the LittleFreeLibrary would be less likely to get bashed apart by neighbor kids with baseball bats.

Then one morning, glancing out my front window, I saw a young white couple stopped at the library. Instantly, I was flooded with emotions — astonishment, and then resentment, and then astonishment at my resentment. It all converged into a silent scream in my head of, Get off my lawn! …

You need a hopefully-silent shotgun in your hands for best effect there. It's just the edge of your lawn, anyway, and how do you think I feel when black people from another neighborhood come up to the house on Halloween, some with no costumes?

Now that they were in front of my house, curious about this new neighborhood attraction, I didn’t know how to feel.

I don't know about nuts like Miss Kaplan, but for most of us, we don't have to figure out how to feel about something. I do know how I'd feel were the races reversed. "Man, I hope these guys aren't casing out the house. They sure as hell ain't out there for the books."

By bringing this modern cultural artifact here from white neighborhoods, had I set myself up, set up the neighborhood? Was I contributing to gentrification and sending the wrong message about how I wanted the neighborhood to be?

OK, Miss Kaplan gave away thoughts there that weren't supposed to come out. Nice stuff = White people. Got it.

What I resented was not this specific couple. It was their whiteness

OK, then, at least you know your feelings this time. You hate White people. (There are lots of inexpensive neighborhood in Los Angelos that have NO White people. You can bring your LittleFreeLibrary with you when you move.)

… Ultimately, the moment with the couple I saw through my window raised for me a serious moral question about how I should act. Screaming at them to get off my lawn would be adopting the values of the oppressor, as my racial-justice activist father used to say.

As an oppressor, I'd like to scream "get off my lawn" at black people occasionally, but I'm pretty sure that wouldn't go well for me. (There are too many cameras, if nothing else.)

Yet my resentment was not analogous to the white resentment of generations past (and of now, I’d argue). White resentment has always been legitimized, and reinforced, by legal and cultural dominance, a dynamic evident in everything from the rise of Trumpism to the current battle against the political boogeyman of critical race theory.

Whaaa? You lost me among the gibberish.

My little library, affirming as it is, is also an illusion; it can’t save our neighborhood. Still, in 2021, it has become increasingly important to maintain and grow Black space, on its own terms. As I watched the white couple peruse my little library, the most complicated feeling of all was the brief, bittersweet satisfaction I took in watching them drawn to my lawn, and to my idea. It felt empowering and hopeful on the one hand, defeating on the other.

In other words, you're glad your house is not seen as a total shithole. Good on you. Next step: Yard of the Month.

So what message do I hope they took from my library? The same message I wanted to send to the rest of my neighbors, my community: Black presence has value — in every sense of the word, and on its own terms.

They may have just figured a nice old White lady lives there. They were sadly mistaken, on the "nice".

That value should make the casual displacement of Black people untenable, even immoral. And that will take much more than a little library to rectify.

What value? If your neighborhood was that great, maybe the houses couldn't be bought up for cheap by White people. Nobody's forcing anyone to sell either. If you want to see value, wait a couple of years and see what kind of property tax bill you get. Now, that's a case in which I'd understand your feelings! I hear ya', sister.

Well, that was fun, but the question is: Are people like Erin Aubry Kaplan and hundreds of others that Steve Sailer features out of the NY Times and such really this stupid? Do they just need people to explain things to them logically. Would it help anyway, if they are as stupid as they sound? Nah, I think people like Miss Kaplan just come up with stuff to piss off White people. They know that, for fear of trouble, not many will dispute this feigned stupidity, which is nothing but lies that they are being forced to swallow with a smile.

* That's an old blogger term, the origin of which is explained here on Peak Stupidity in A Visual Fisking of Cortez the Killer. (We fisked the Neil Young song not the conquistador himself.)

Moderator
PS: T.J. Even Miss Kaplan knows better than that. She would like to keep it a black neighborhood, but still, she doesn't want shootouts on her front yard.
MBlanc46
PS T J: Naughty!!!
Ganderson
PS

Thanks, Adam. It was an enjoyable weekend, despite the outcomes; the lads played poorly the first night, way better the next. The Wolverines are a really good team! And Yost Arena, where Michigan plays, is a great place to watch a game.

I did notice that mask wearing in Ann Arbor was even more ubiquitous than in Amherst, which I hadn’t thought possible!
T J
PS
If she wants to attract the right kind of people she could fill that little library with Newports, Swisher Sweets, grape soda, nacho cheez chips... etc
MBlanc46
PS One of our neighbors across the street here at the Blanc winter retreat has one of those book thingies. I find it a bit twee, but, hey, I’m all for reading. Maybe sometime I’ll put in a copy of Hume’s Treatise, or maybe the Phenomenology of Spirit, just to shake things up a bit. But, of course, some mulatta has got to have a fit about it, because, well, because it’s what they do. That the mulatta appears to be infused with some Ashkenaze (how many joggers are named Kaplan?) would lead one to think that she might be more positively disposed toward reading. People of the Book, and all that. But no, it’s get Whitey uber alles (supply your own umlaut).
Cloudbuster
PS Every single time.
Adam Smith
PS: Good afternoon gentlemen,

“I’d spotted the phenomenon on walks through upscale, largely white neighborhoods...”
“I wanted to signal to my longtime neighbors that we had our own ideas...”

Is Miss Kaplan a narcissist?
Whose ideas?

“Screaming at them to get off my lawn would be adopting the values of the oppressor...”
“As an oppressor, I'd like to scream "get off my lawn" at black people occasionally, but I'm pretty sure that wouldn't go well for me...”

Maybe you should try it while wearing blackface?
Do it for the lulz...

“My little library, affirming as it is, is also an illusion; it can’t save our neighborhood.”
That's an interesting expectation to have of a little library.

“It has become increasingly important to maintain and grow Black space, on its own terms.”
“So what message do I hope they took from my library?”
“Black presence has value — in every sense of the word, and on its own terms.”

Lol... No. No it doesn't. And who talks like this? A Professor of Mixed-Race studies?

If Erin Aubry Kaplan passes as a black, then so does Rachel Dolezal...
https://i.ibb.co/PCSC97c/Kaplan-Dolezal.jpg

It was Chris Rock who said that books are like Kryptonite to a "jogger"...
Moderator
PS: "Everybody is above average" - Dieter,

I didn't know whether to write a quick blog post on this or not: I heard "that's a really nice outfit!" said by some woman to another in the big airport terminal. Women occasionally say that to strangers to make them feel good of course. I looked that way, Dieter, and the woman saying thanks was an obese, I mean double normal weight, with it all hanging out, black lady with fake eyelashes and that...

The woman who said that was only maybe 75 to 100 lb. overweight. What should we make of this?

Yeah, the extremely-but-not-severely-fat lady was just being nice and probably did make the severely fat lady feel good. Was it a lie? I guess it could have been a really nice outfit, I dunno. Yet the whole idea of this exchange is based on a lie.
Dieter Kief
PS
Commenter bomag at the Unz Review found that this formula'd be on the rise lately in this context as a form of peace-treaty signaling the good will of the suppressed: Everybody is above average!

There seems to be a woke fat science which states that it's racist to talk about fat people. - That sounds like an elegant way out too.

Bottom line:The premise is: Feelings beat facts. - See: There is an easy way out here! - (Just which song reminds me this little seqence of - easy way out now?)