Alas, it could have gone differently

This is nothing original today, but just in case we have Peak Stupidity readers who are not also VDare readers, I point you to 2 very good posts on that site. They are by the 2 men that run VDare and Amren (the organizations and the websites), Peter Brimelow and Jared Taylor, respectively.

Mr. Brimelow has been one of the few pundits I read to regularly use the C-word, along with at least one other (Jack Dalton) on the site, as we happily noted in OK, Some (V)Dare Call it Communism. This long post “This Is A Communist Coup. But White America Is On The Move” is not about the failures of old-timey Communism and that*. It's a timely speech on what has been attempted on the immigration front against these people and what should be done in the near future.

This post is a transcription of a speech that Peter Brimelow gave at the Amren conference in the usual venue on Tennessee State Gov't grounds, near Nashville. This is a great read, and nothing against Mr. Brimelow's accent, but he is right in his note at the beginning of the VDare post that he's easier to understand in writing for us Americans.

There is a lot to the speech, and this is not a review. About Mr. Brimelow's 6 political solutions he prescribes to be implemented sooner rather than later, unfortunately, I think he is much too optimistic with almost all of them. We can have an overwhelming GOP Congress in '22, but almost none of those things is going to happen. That's not because the GOP COULDN'T do them. It's because there are always a large proportion of traitorous or money-hungry, or cowardly cucks among them. I never liked it when Lucy kept doing that thing to Charlie Brown with the place kicking. We Conservatives need to quit being Charlie Brown.

Then, Mr. Brimelow gives some more possible separation scenarios. Those are more realistic, though we don't know how some new Federalism is going to fare. It's matter of power. Thankfully, due to diversity, Federal power is getting weaker, but the people are still accumulating firepower. 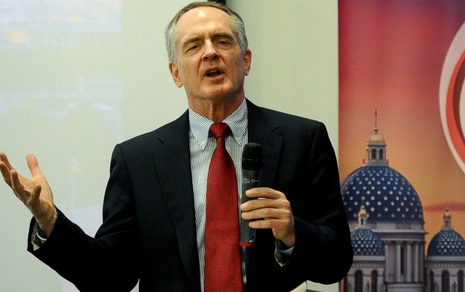 Peak Stupidity has discussed the McMichaels' and friend's self defense case just a bit before. After the verdict, we posted For the White Man: no justice and no peace, and after the extreme Anarcho-tyrannic sentences given, we posted Georgia 3 sentenced to life imprisonment in self-defense case. Well Amren's chief Jared Taylor does a much better job, and he also lays out the story of what went on in Satilla Shores that day in late Winter of '20 very well, something I haven't done at all.

Here is his "Justice For Ahmaud Arbery"—Another Atrocity For American Whites on the sentencing, on VDare. Here is the same article on The Unz Review, under which one can post comments. (It's got 280 of them right now, the article having been displayed on top left for a day or two.)

Back in '21 around Thanksgiving, Mr. Taylor also did a fine job writing about the case and the verdict. See How Horrible Is The Arbery/McMichael Verdict? HORRIBLE, For All White Americans . Here is that one on The Unz Review with 372 comments. Got time on your hands?

Both of these men are polite and civil, with Jared Taylor being more soft-spoken. They don't scream for violence. They don't even use cusswords. (That's, unless we count the C-word.) The just calmly try to encourage political solutions for the immigration/racial mess this nation has had forced upon it. They have both been doing that for a couple of decades or more.

Imagine if Americans had listened to, or more like it, had a CHANCE to listen to, guys like this running for high-level office in government. We had Ross Perot, Pat Buchanan and others, still not marginalized completely off the radar, in the 1990s. Many of us supported these men, and likely Mr. Brimelow and Mr. Taylor did too. How did we not take care of the problems then, 30 to 25 years ago? It'd have been much easier. Alas, it could have gone differently, much differently...

* Although Peter Brimelow does include a few paragraphs that explain why we can use the term Communist. I think I'll include that in another post, but it's about 1/2 way down his post for you to read.

That was a good tune too. Very cool. Thank you.

I've no idea what they'd charge for a custom made 8 string.(?)
http://www.alembic.com/prod/prices.html

I hope you have a great evening, Robert. 🍺 Cheers.

☮
Robert
PS: Mr. Smith, I just realized that I had somehow been confusing/conflating Stewart Copeland with Aaron Copland.

That was a good tune, Thanks.

Here is ELP doing Fanfare for the Common Man:
https://www.youtube.com/watch?v=c2zurZig4L8

There is no political solution and the police are not our friends, Stewart Copeland and company excepted.

Check out Jon Gomm's version of Message In A Bottle...

Yeah, at least Mr. Brimelow has a castle. I've suggested equipping any turrets there may be with a semi-auto .50 cal.

Hey, I didn't paste the link in, but I am familiar with "Spirits in the Material World". It wasn't my favorite of the Police, sound-wise, but still great stuff. Thanks for the reminder.

Speaking of the Police, there are plenty of Conservatives who still believe the FBI, those (imagined) coat-and-tie-wearing, earbud-listening, White guys with the good hair cuts are our friends. They, the NSA, the CIA, and Motherland Security are arms of the enemy of the American people.
Moderator
PS: I took a quick glance at that "The Hill" article, A-G. They are really out to get Trump, aren't they?

The thing is, I don't even care what happens to the man himself but just what the Commie left tries to get away with. Their M.O. seems to be to push back even harder, using their own people, and turn the very obvious evil things they do, like the '20 Cheatfest, around 180 degrees, trying to implicate the right. It's not projection, IMO, either. They know what they are doing - anything they can get away with, with all the Establishment support in media, government, whatever they can muster.

It is futile to try to argue the logic of it, to convince anyone on their side. They KNOW they are full of it. That doesn't matter. They want to be able to tell us that 2 + 2 = 5 and have us accept it.

In this blog, I don't stress out trying to convince anyone on the left. Ridicule of them is how we roll here.

Have a nice evening, and thanks for writing in again, Anti-Gnostic.
The Alarmist
PS

Did you catch the news that that former-Eff-Bee-Eye paragon of virtue, Andrew McCabe believes the various organs of nationa” security need to stop focusing solely on the extremist right and start looking at the broader rightists, including closer surveillance of mainstream Conservatives ... I guess he means people like Sean Hannity, who the Dem House Committee are trying to smear as a co-conspirator in organizing the 6 January Insurrection. Brimelow and Taylor will no doubt be taken into protective custody in 2022, along with a number of other deplorables.

As the police once sang, There is no political solution....

This, by the way, is why I stopped blogging. We are in a doom loop of stupidity and evil and I found myself writing the same things on the same stupid evilness every month.

We're done. Decline and fall.
Moderator
PS: Thank you, BC. You are right. I will correct it now.
bc
PS: I thought the AMREN conference took place on property controlled by the state of Tennessee. I can’t imagine that it could occur on federal property.