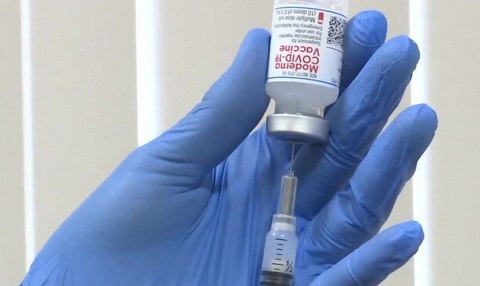 This post is a correction of Peak Stupidity's 2 week-old post The Booster Shot Scam. In fact, it turns out that that previous post was erroneous in its main point. That point was the people were arranging their Kung Flu booster shots in a manner to guarantee them something like a week of paid time off. Well, that's true ... in a way ...

I worked with a another fairly young guy (mid-to-late-20s) who has taken the vaccine and a booster shot. In this case, his wife had been required to due to her teaching job, and this guy went with the flow. I'm not at all endorsing this sort of thing, mind you, but that's not the story. He told me that he had gotten a paycheck that was not to his liking, i.e., it didn't seem to add up. During the pay period, he had taken that booster shot to get a couple of paid days off.

Oops, nope. This guy is no dumbass, but he had also been under the impression that he would get this time off paid. What it is, is that this sick "occurrence", as its called, is not counted for any kind of discipline for people making way too many sick calls. But, at the very bottom of the memo, it says that this time off will not be paid. Yes, it is in fine print.

I can't think of any words more descriptive of, and appropriate to, how I feel about this news than those of American sage Nelson Muntz:

See, people indeed WERE arranging their Kung Flu booster shots in a manner to guarantee them something like a week of paid time off. as I stated in that previous post. However, they haven't been reading the fine print! They won't get it!

Sorry to hear the coronacraziness has not yet subsided in your neck of the woods.
It's utterly amazing to me that so many people can be so scared of the common cold.
Mass hysteria is an interesting phenomenon.

I have no idea why so many Americans would listen to the little “doctor” who doesn’t practice medicine, Achmed.
Not. a. clue.

I would think (and I know I'm mistaken) that even the slowest Americans would know you can't believe the TeeVee.

Thanks. I love it here. Our little cabin atop the mountain is quite nice. (And so is our view!)

Despite all I’m reading about the Coronamonomania going away, the panic is being dialed up to 11 here in Western MA. A bunch of Karens in the legislature are pressuring our clown college governor to re-institute a statewide mask mandate. My bet is he folds.
Moderator
PS: Why do Americans even listen to a word the sick Dr. Fauci says, Adam? I guess it's just because they keep putting him on TV. Your place looked nice, from the pics of the late cat of yours.
Adam Smith
PS: Good evening everyone...

Mr. Hail, “I'm wondering whether there are families out there who check corona-vaccine status "at the door." I wonder how widespread that is.”

Fauci says American families should consider creating household vaccine mandates before gathering for the holidays this season... “people should, if they invite people over their home, essentially ask and maybe require that people show evidence that they are vaccinated, or give their honest and good faith word that they have been vaccinated.”

I too wonder if anyone actually does this.

Then, about 5 years ago, I captured some atmospheric static electricity and fed it into a fuji camera circuit which boosted the voltage to 47v. With a little more current I could use it to charge a 12v AGM battery. (I should get off my lazy ass and solder up some new circuit ideas I have.)

☮
Moderator
PS: We will still be working for a good while, but we are making plans too, Alarmist. I missed out on what would have been a good piece of property due to not being decisive enough. If nothing else, you've got to get your money into real assets for that reason alone. I was a prepper in '10 or so, but too early (for my wife's liking). She has changed, and it's not so early now.

Thanks for the great comments, everyone.
The Alarmist
PS

I’m holding out for €5m up front and indemnification for my medical bills, though I suspect the storm troopers sent to force-inject me ... those who survive the perimeter defences, that is ... will simply kill me by the time they get to me.

I’m getting ready to Go Galt, but Mrs. Alarmist, trusting soul that she is, doesn’t see things as serious as I seem to see them.
Moderator
PS: Yep, Mr. Hail, that company was flush with money, some of it yours (as a taxpayer). Five thousand bucks. Now if they make it a combo, with a Chocolate Frosite subbed in for my Coke, maybe even I can be tempted. ;-}
Hail
PS

a $5,000 bonus to get a corona-shot? To think that some people (supposedly) got bought off with a burger and fries. Or was it just a burger?
Moderator
PS: Alarmist, that was a good way to handle it with your MIL. How many quality VISITS with her daughter and you does she even have left?

As for this employee and the other (from the previous post), I mentioned they were in their 20's. People that age very often don't know squat and have much confidence in the Establishment. They are not your 1960s or '70s 20 y/o's.

Then again, this one guy who is retiring shortly, after making about $300 something thousand a year, got vaccinated simply because they were giving out $5000 to do so. WTF is with people?
Hail
PS

The Alarmist said: "even the unvaxxed of us..."

I'm wondering whether there are families out there who check corona-vaccine status "at the door." I wonder how widespread that is.

With relatives at a distance wide enough that they don't know all the ins and outs of what you're up to, couldn't people just say they're vaccinated? The other person then either (1) accepts it, or (2) demands to see the papers to confirm the relative's or friend's statement. How many would really go for (2)?
Hail
PS

The idea of maneuvering to get CoronaPanic-related time off is one of the cornerstones of the early Pro-Panic coalition.

The thinking which began around end of Feb 2020 became: "I can use this to pressure the office to let me work from home for a few weeks. Semi-vacation!" Different versions of this thinking cropped up to suit different jobs or circumstances.

Trying to get a week's paid vacation aligned with your "booster shot" (which you may resent in the first place, and which you may not ever have gotten in a true free market with no pressure from any source or Panic-pushing from media and government and Panickers), is another form of Corona-opportunism at a personal level, which, when multiplied by the millions, gave an enormous boost to the Corona-Panic's early backers, a vast auxiliary willing to back the Panic.
Hail
PS

Did Tiffany Dover get a corona-booster?

A few days ago was the one-year mark of the collapse of nurse Tiffany Dover, collapsed shortly after getting the needle, livestreamed. Rumors about her death thereafter persist.
The Alarmist
PS

Sorry to be a typical asshole American, but I have no duty to voluntarily undertake a risky medical intervention and risk my greater number of QALYs to only potentially save my more elderly relatives’ their dwindling QALYs. In any case, the vaxxes don’t prevent infection or transmission, so the argument that one wants to protect others is specious.

My wife was ready to not celebrate Christmas with her 80+ Y.O. mother and her siblings (all vaxxed), and I suggested she ask her mother what she wanted. Turns out Mom wanted to see her family in person rather than via a screen, even the unvaxxed of us, and she is aware of the risks. She lived on the Continent through WW2, so I’m sure she’s seen far worse. She didn’t ask us to test, but this is one of the few times I will willingly test out of respect for the old girl. We need more like her.

It’s the vaxxed ones who should be testing to protect me, because they pose a greater risk to everyone by masking transmissible infection with lighter symptoms.

If the guy is taking the vaxx risks toget a few days PTO, he might be a dumbass with some talent, like an idiot semi-savant.
Dieter Kief
PS A reason for younger ones to take the jab is to protect the vulnarable/ elderly. This might not be as effective as they think, but it is a honorable motif. So - I'd be a be a bit less harsh on these people, Mr. Hail.

Dr. Robert Malone has recently spread the idea, that the vaccines might spped up Alzheimer's disease - but unfortunately, he had no evidence, proving this - and other of his wide ranging claims. Such as skyrocketing numbers of heart diseases amongst the young not least. Well - Michael Levitt has a tweet with the numbers for 2020 and 2021 from Israel and what do wes see? _ No incresase in heart diseases of the younger cohorts - but a visible decrease - - - so?

Hope bring eternity - : - Those taking Viagra suffered 70% less of Alzheimer's disease than would have been expected, a recent study - rthe coincidentally! - found!? Maybe an Viagra jab for the elderly is already in the pipeline? -

- I'm sure, it would sell like hell!
Moderator
PS: Oops, glaring typo on my part there, Mr. Hail. (I'll fix it in your comment manana.)

Oh, yeah, I'd call it a stupid move, getting that shot, if you have no particular condition that makes you obviously vulnerable, and, yeah, 65-70 is the age I'd say, if you don't, depending on what kind of sicknesses you are prone to getting too.

However, the guy is no dumbass in general, I should have said. He is savvy enough about how the rules work. He is also a good guy to work with, so I didn't bring up anything more about the shot other than, yeah, "hahahaaa!", especially in regard to the other guy who would have unexpectedly burned a metric shit-tonne of sick time!

"This guys is no dumbass"

Anyone under age x getting these injections is on the wrong side of the risk-benefit profile and so counts. Evidence I see suggests x may be north of age 60, maybe 70.

Under age 30, there is something we can only call zero threat to him from the Wuhan-apocalyptic-terror-virus. (Much less than doing any number of daily activities.)

The guy is playing "corona-needle Russian roulette" for no reason. IMO that does kind of make him a "dumbass" (if we wants to be crass about it). Of course it's not his fault; it's the fault of the Panic-promoters, the Lockdown-lovers, the needle-pushers. The large majority just go along with whatever (quote: "this guy went with the flow").