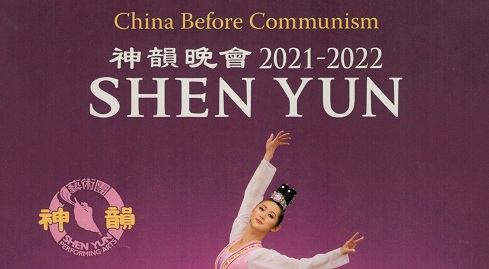 No, no, no, not Shen Yang! That's a city* in Manchuria. I'm never goin' back. We're not talking about a Chinese MSG-based delicacy either. I'm getting confused myself. I asked for some Shen Yun, hold the MSG, and I got Mu Goo Gai Pan, ... the comedy duo, Mu is the straight man, and Goo is the funny guy. Mr. Gai Panned their whole routine in the Chinatown Daily Worker, saying it was too Bu Wai Zhee.

Sorry, that one came straight outta the comments in Peak Stupidity's previous post on this Shen Yun crowd. Commenter MBlanc46 noted back then that'd he'd seen loads of ads in his area for this anti-Commie ballet troupe. The ad above is for the same, but for the '21-'22 ballet tour.

Note the anti-Communist theme of this year's tour. Inside, the brochure, it says:

Come see what the Chinese Communist Party doesn't want you to see. Every year since its inception, Shen Yun has had to overcome the CCP's attempts to sabotage the performance.

For millennia, China' s dynasties were home to a world of profound and bountiful culture. That all changed in 1949 when the Chinese Communist Party (CCP) seized power. Viewing China's spiritual and artistic heritage as a threat to its atheistic and materialistic ideology, the communist regime spared no effort to eradicate traditional Chinese culture and anyone who stood firm to defend it.,

Then Shen Yun came with a mission to revive this 5,000-year-old [John Derbyshire says 3,600 years, so I'm goin' with that, sorry.] culture

So, you're taking the fight over here? But, per last year's FAQ, there will be no Kung Fu (hence our preference for the Monster Truck show instead...). Fighting Communism by ballet dancing - well I've heard it all now.

Look, I've got no problem with ballet dancing per se. I've definitely got no problem with anti-Communists. The thing is though, well two things, they want a couple of hundred dollars a ticket for them to fight Communism in China by performing ballet, and why don't you keep this fight in China?! Per the previous post on this Shen Yun crowd, they are allied in some way with the Falun Gong, who, per the CCP, were fighting the CCP by stretching and calisthenics. There was that old Chairman Mao saying, power comes from doing lots of jumping jacks. No, that wasn't it.

Peak Stupidity wrote a post a couple of years back about the stupidity of importing a civil war, in Sweden. That one was about importing ~ equal numbers of Iraqi and Iranian Moslems who don't particularly get along back in the Middle East, so there's no strict guarantee that they will get along in Sweden. Now, we have a large number of Chinese people living in America as citizens or in various stages of the immigration process, legal or illegal. I suppose it's good that they can get some influence from the other side of the story vs. the CCP propaganda. However, I think it would be better if the Chinese people living here for good would live as Americans, concentrate on the American Communists, and leave that whole China scene behind.

Really, are there Americans in China performing ballets or just having rallies, pro-Trump or anti-Zhou Bai Dien? Pick some random countries that have a few Americans. Do Americans in Germany have political events about American politics? If you're living in Germany or in China, you lay low (especially in the latter case), you live as the Germans/Chinese do, and you ask yourself "why in the heck would the average German/Chinaman want to go to my special political ballet?"

There's been so much of this in America done by Americans over the recent years, since the 1960's (hmmm, what bill was passed in 1965?) The Cold War, American influence for its sake, and pushback against this, was one thing. At this point in history, I don't know what foreign places have anything going on that is our business. Bomb the Serbians, kill Kudaffy, protect some rocks off of Japan from the Chinese, protect one group of Koreans from another group of Koreans, c'mon man, we're flat broke!

For years you'd see those Free Tibet! (or was it Free Tibetan Coffee!.) bumper stickers. You want to free Tibet? Good on you. Go to Tibet and free Tibet - your bumper sticker is not helping free Tibet.** Now, the deal is we have so many people from foreign lands that are not going to leave their old animosities behind.*** Unless their politics affect America, I don't care. Leave it behind on the border, at the airport, in that shipping container you came in ...


* Formerly Muckden, but even Chinese people don't know that, cause, Mao.

** Whichever side they were on, you've gotta give those idealist young men in the mid-1930s that went to Spain to fight in that civil war some credit. Even Eric Blair, aka George Orwell, a clueless fool at the time, decided to fight on the "Republican", aka Communist side, picked up a gun, and spent months on the battle lines. See our review of Homage to Catalonia.

*** It's nothing really new. This goes back over a century to the southern Italians - It should have been "No, Vito Corleone, you have to go back." (It's hard to say "no" to a man named Vito.) It's all good now, but it's been a century!

From the good Mr Derb:

"Five thousand years is a stretch. The first person whose name we know, and who probably existed, and was probably Chinese, is Cheng Tang, floruit mid-1600s BC. That’s 3,600 years and change. The rest is mythology."

Some anonymous commenter rebuked The Derb, said the mid-1600s BC idea was foolish, said that the REAL first dateable person is someone called "Jie of Xia."

On closer inspection, there is a wide range of estimates on when Mr. Jie of Xia lived, born somewhere between 1728 BC and 1650 BC, which would probably make his "floruit" period about the same as The Derb's proposed First Chinaman, and probably later if he credit the story that new dynasty-makers whacked him in 1600 BC sharp at about age 50.
Moderator
PS: Mr. Hail, I might be able to find the comment for you later on (as, Mr. D. doesn't leave too awful many on unz.com), but he wrote me this correction in a reply comment. He linked to something he wrote somewhere else about when the Han culture became pretty much what it is, or at least when it solidified. It's not my field or interest by any means. If I find the comment, I can find the article in question.

He really is a good writer. He linked me to something from his own site on his late 1990s, I think visit to China. It's a long piece of writing but both interesting and entertaining.

As for drinking with those guys, that's an idea, but I don't do much drinking anymore. ;-{
Moderator
PS: Agreed completely, Mr. Russell. Man, in the 1980s all they had to deal with in LA was Latinos (Chicanos?) driving uninsured beaters around and playing loud annoying music, earthquakes, the occasional big brush fire, and accidentally running into Rob Reiner at the AM/PM. Now, they've imported a whole UN plenary session x 10,000. Heckuva job, Blondies!
Hail
PS

What is China, or Chinese culture, and how do you establish an exact start point for a culture?

What is the origin, or "start date," for Western culture?

Any proposed date would have to have wide error bars.

The origin of the West from a genetic standpoint is the arrival of the first steppe people who came to stay and mixed with the Paleolithic population stocks still mostly there and a few newcomers here and there. The steppe peoples' takeover and imposition of their languages was a long process that started in, I think, 3000 BC and continues for over a thousand years.

So here's a good bar question to try with your Chinese drinking buddies:

As to "importing a civil war," the Armenians of Los Angeles are doing a fine job of starting a civil war that over something that happened a long time ago, and trying to involve everyone else in it. Let's see, I'm supposed to hate the Turks, why? Because of something somebody did a hundred years ago in the middle of a war? Seems like I have a lot more reason to hate Russians, Germans, Japanese, Rumanians, Spanish, Chinese, Vietnamese, Algerians, Saudis, and probably a few dozen others if I gave it enough thought. That's how I get through life, just forgetting who I ought to be hating. Hard to do with idiots running around with giant Armenian flags hanging out their car windows with "Fuck Turkey" painted on the windows with shoe polish, and intimidating shop owners into shutting down on whatever they've decided their "special" day is. The bumper stickers point out that I'm supposed to FREE AKFADFKKHH! (or however it's spelled) presumably with the AK-47 depicted on said bumper sticker. I would be very glad to equip the bumper sticker's owner with his very own AK-47 and a hundred rounds so he can go FREE AKFADFKKHH! himself, but I get the feeling that's not really what he's after.

Importing more of this is JUST what we need.
Moderator
PS: I don't know how many of God-free Roberts' articles or comments (with the colorful totally bogus bar graphs) you've seen, Alarmist. I have agreed with him some of the time about the CURRENT state of things in China, although he sees none of the bad, because I don't think he's ever actually been there.

However, on the history of China, the Communists, and Chairman Mao, honestly I first thought that he was doing a parody. God-free Roberts denies everything evil that the Mao regime perpetrated, the 30-40 million Chinese people (I know the granddaughter of one) who starved to death due to his "Great Leap Forward" and then their Cultural Revolution.

To laugh at the stupidity over here, our own Cultural Revolution that I believe has already gotten stupider than theirs, if, for now, not as violent, our sham of an economy, etc, well, I don't have a problem with that.

I would have agreed with your part about the authoritarianism about 10 years ago, but that country is going in the wrong direction faster (since Pres-for-life Xi in '17) than even we are. Our x-sub-zero was a lot further to the freedom side too. We'll see, Alarmist.
The Alarmist
PS

The problem with anyone in the west calling the ChiComs commies is that our own economic systems are increasingly less capitalist than China’s, and our political systems are every bit as intrusive into the lives of the average citizen and the scope of political authoritarianism in the west equals and is on its way to surpassing the control the ChiComs have on theirs.

Could it be that we might have to start paying Godfree (what a name for a Sinophile) Roberts his due?