Some people ya' just cain't reach... 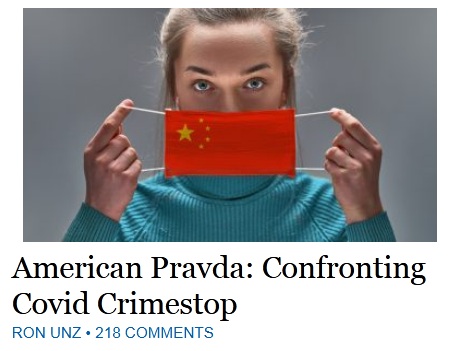 This could be it. Do we have Ron Unz, on the side of the anti-Panickers now?! This is unprecedented .. he's a phenomena, man ...

In George Orwell’s classic dystopian novel 1984, one of the many interesting concepts was the notion of “Crimestop,” the ability of well-trained citizens to self-censor their thoughts before they strayed into dangerous and forbidden territory. As conveniently summarized in the Wikipedia entry, Orwell wrote:

Crimestop means the faculty of stopping short, as though by instinct, at the threshold of any dangerous thought. It includes the power of not grasping analogies, of failing to perceive logical errors, of misunderstanding the simplest arguments if they are inimical to Ingsoc, and of being bored or repelled by any train of thought which is capable of leading in a heretical direction. Crimestop, in short, means protective stupidity.

Given the existing and ever-growing number of forbidden topics in contemporary Western society, this concept may or may not be applicable. Perhaps thoughts are being self-censored or perhaps merely words. Lacking eyes into human souls, it’s obviously difficult for us to distinguish between the two cases.

The Orwellian nature of the Kung Flu PanicFest? Preach it, Brother Unz!

In any event, that concept entered my mind near the end of November when I began reading a full page of book reviews in the Wall Street Journal entitled “What Happened in Wuhan,” with the descriptive subtitle “Four books pursue theories of possible origins of the Covid-19 virus—and the question of cover-ups.”

OK, yeah, Ft Detrick, Wuhan, yeah, yeah, it came out of some lab... OK, fine, but about the media and government created PanicFest, the LOCKDOWNS, the push for mandatory vaccination, the Totalitarianism, from this just another virus out of the Orient... go on ...

Our global Covid catastrophe is probably the most important historical event since the end of World War II, and with its second anniversary now upon us, serious books analyzing the origin have finally begun to appear in print. I have extensively written on exactly this topic since April 2020, ...
.....
Until recently the media might have relegated any such discussion of Covid origins to the “fever swamps” of the conspiratorial fringe. 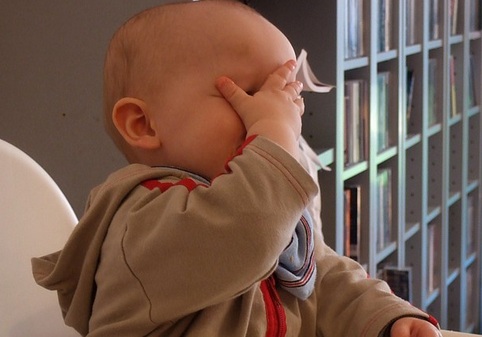 We don't care about the COVID origins, Ron Unz! That's not the big story here. Damn! Some people ya' just cain't reach....


Moderator
PS: BTW, for Mr. Anon, if you happen to be reading.

I give you a hat tip here for the bit about near-future Ron Unz. Of course, your way was a lot funnier, but a) I didn't want to take your whole thing and b) I am not sure if you wanted your handle there in the comments (as a h/t) for Ron Unz to be on your case now.

The thread is coming up on 400 comments, so it doesn't matter now, but I hope you will put that in there early on in one of his post's threads next time. "I have not paid much attention to what those LOCKDOWNs were about in the past couple of years, being busy with my important software work, but I just read 14 books about ... and my friend has been whisked away for not getting vaccinated so..." Well, your way was better. We conversed about it in that other thread.
Moderator
PS: Mr. Kief, I am a big P.J. O'Rourke fan! It's been, oh, about 20 years though, maybe 25. I didn't remember that part about the stoners and the dolphins. It might be possible that there's a book by the guy that I missed - I mean a book from that era, as anything new would likely have a new woke P.J. O'Rourke, for all I know.

For you and Alarmist, you both know that unz.com is my go-to site for entertainment and information. I guess I can't expect the boss man to necessarily have his head together. Over the last nearly 2 years now, since this PanicFest started, I keep getting my hopes up that he'd get his "American Pravda" series focused on what's going on in the here and freaking now! I mean, maybe the guy just does better reading history books (at 14 per day) than he does talking to people and seeing what's going on outside his Palo Alto house.

This one was frustrating, because I didn't really think about what the Chinese flag mask was about, but I thought he was finally going to write about the Totalitarianism.
The Alarmist
PS

COVID literally is nothing more than a bad case of the flu, and you and I seem to be in agreement that the course of treatment prescribed by our Criminal Elite is the bigger story here, as it kills not just masses of men and women and other-identifying folks, but also entire nations as we knew them. The vaxxes might re-order human DNA, but they also operate on a larger scale to facilitate the re-ordering of societal DNA. Any way you look at it, the Magic mRNA Koolaid®️ is bad medicine.

But while civilisation as we know it sinks beneath the waves, it is comforting to know that Mr. Unz has assembled a band to keep us entertained while he re-arranges the deckchairs.
Dieter Kief
PS - As me ever so shy have tentatively and cautiously hinted at quite a bit before: Nothing new to see here. You've fallen for the Unz-deception**** one more time, Mod, same old same old. - (The Unz deception is something rather basic and archaic. The Holy Bible knows a bit about this phenomenon. - If I'd be forced to condense it (the Unz-deception, not the HolyBible that is), I'd end up musing about how important leaders are and how risky it is to follow them. Basically I'm good here with the young Mr. Dylan: It leaves you puzzled at times to realize that the big man is not as big as you thought. A form of disillusionment. - As such it is a strong antidote to all kinds of deceptions of the Unz-type.This antidote does not work all by itself though. This is it's Achilleus-heel (hehe - : The Greek too knew that the big man thing is not that easy to grasp. Maybe the best way to grasp it is to realize that Miguel De Cervantes' Don Quixote novel is the answer to centuries (!) of big man (heroes!) novels in medieval times. So - think of Ron Unz as Don Quixote every now and then. This will solve the case, Mod! - And bring you a laugh, which is doing more good in cases of emergency than many a good soul would want to beleive. But it's true.
https://www.bing.com/videos/search?q=bowie+heroes&ru=%2fsearch%3fq%3dbowie%2bheroes%26form%3dANSPH1%26refig%3d49fc8e6e755947789f334868235e0a46%26pc%3dU531&view=detail&mid=0EDF459D722D37F7B9A70EDF459D722D37F7B9A7&rvsmid=E373099B9E45F3E69DE1E373099B9E45F3E69DE1&FORM=VDRVRV
The most astonishing part here is the disillusioning bit about the dolphins. David Bowie - : - The hippie-annihilizer. Shocking! - I didn't remember this bit at all! - Now I think of P. J. O_Rpurke, who sure would've gotten a few good laughs out of Ron Unz' / Parzival (Parzival: "The foolish knight!"). - Oh, O'Rourke did get a very and extraordinarily good laugh out of  exactly this dolphins-hippie-thing too. It went ca. like this: Do you remember how those stoned hippies used to talk, especially when high - like, you know, what I mean like - uhh - far out man  far out!. ... etc. - How they stuttered in the most restricted way instead of talking, all day long in awe with their oohs & cool-man! and dig-it formulas? - Do you remember that? Ok, P. J. O'Rourke went on,  - now you know how the dolphins and their ability to TALK could become such a big thing for this retarded and loaded bunch 'a fools! - And believe me! I do know what it means to be loaded and reatrded at the same time from very deep within myself. That's the ever so colorfully exploding bloody truth inside my brain...Because a spaced out fool I was myself, if ever there was one.... **** Unz-deception or big man folly is what this agency specializes in, as it seems lately. - Well, we do whatever is necessary to enlighten the frightened and miserable masses out there. - And I'm sure "somewhere in this universe" (B. D:), there's billions of those (the observatory in nearby Singen says, that there are 70 sixtillions of stars, but that these are just the ones we know about and that quite likely there'd be even more of them. - Hehe again ("...haha said the clown!")
Today I found something interesting: The universe is as lowly loaded with matter as sixteen cubic meters of space are or were if in them there'd be nothing but four hydrogen atoms. - That's .c.u.t.e., isn't it?! - When in doubt - ask your nearest toddler...

https://www.universetoday.com/36302/atoms-in-the-universe/#gsc.tab=0
Moderator
PS: Nice cartoon, Mr. Hail. Is Ron Unz up in that balloon somewhere? I guess he's sort of with us, but my take is that he does not like to be seen as wrong. I'm not even saying his American bio-weapon speculation is wrong for sure, but he's wrong in that he's fixated so much with that, that he has ignored the big picture.

Your quoted line in your 3rd comment reminds me that one can really see Mr. Unz's ignorance on China in his latest column too. He envies the Totalitarianism of that country that allowed it to supposedly defeat this virus. Ha, he's got no idea what goes on in that place, and no, the virus will mutate just like the flu and common cold have, same as here.
Hail
PS

"Looming disaster was only averted by an immediate public health lockdown unprecedented in all of human history."

A good political cartoon for our times:

"Our global Covid catastrophe is probably the most important historical event since the end of World War II!!!"

A straight-line reading of this ("global Corona Catastrophe!") suggests Mr. Unz is still dug in on the Corona Question, dug deep into his Corona-Panic foxhole and not wanting to get out of it, clutching tight to the banner of the Pro-Panic side, except that his flag has a handful of asterisks people mostly don't care about, he's still loyal to the flag

To suggest an alternative metaphor:

Mr Unz is still floating around in a Corona-Panic bubble. We can see him up there, drifting above the weary bonds of this virus-plagued Earth. He is able to see, down below here, the sad visage of the globe, littered as it is with all those millions of corpses of Corona-deaths (or tens of millions, but a global conspiracy by Crazy-Corona-Deniers has likely covered up many or most of the deaths).

From the Corona-Bubble, Panic-loyalist Unz is able to pity, mock, and/or scorn, as mood suits, those deranged bands of addled Covid-deniers and Science-haters (the Anti-Panic side).

From the safety of the Corona-Bubble, he can observe these sinister bands of still wandering the virus-catastrophe-scarred countryside. The Covid-denying zombies cackle as they pick clean those millions of Covid-corpses. Or so it looks from the vast height of the Corona-bubble floating above it all.

When he maneuvers the Covid-Bubble down closer to the virus-plagued surface of the Earth, sometimes he sees large mobs of Corona-Denier crazies get agitated and some even lob stones at him or at other Corona-believer bubble-people.

Now, the good CoronaPanic-loyalist Unz is a fair man, and he wants to sympathize with these misguided people. He really does, especially after two years have passed and these Corona-denying cattle-people remain agitated, maybe more than before. Bitterly angry at Science they are, like Job was angry at God in the Bible. But no one is made of stone. The Covid-Bubble people's scorn and disgust sometimes gives way to pity, like adults look on the games of children.

Alas, the safety and warmth of the Corona-Bubble beckons, and Panic-loyalist Unz takes his leave. The Covid-denying semi-savages down below may be hopeless. As he ascends back up, he sees the Deniers continue roaming the Covid-apocalypse terrain below. Savages! It's good to be on the side of Science.
Adam Smith
PS: Lol... ☮