Not worth a bucket of warm.. something ... 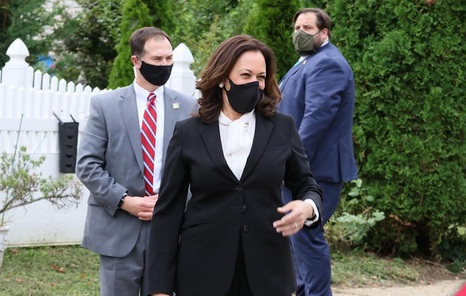 We have written nothing but a possible occasional quick reference, and I couldn't even find one of those, to VP Kamal-Toe Harris but one time on this blog. That would be a post written just after the '20 election called Save Ferris Joey! about this first woman VP* who blew her way right through that glass ceiling keeping the VP office stale and male.

You may have noticed that Peak Stupidity pretty much prides ourselves on not caring about what stupid stuff the Feral Gov't "elected" "leaders" are up to there in Washington, FS. We especially don't care about their personal lives or working lives - if you want to call that working. ("Yeah, that's the way ya' do it, you play the sitar on your Dot-TV**... moova, moova...")

Along with other political wonk fans, Steve Sailer occasionally does. He noted again recently that Everybody Hates Kamala. That could be a TV show that I would also not watch. In the comment under his post, I found a gem of a limerick about the VP and the idea that VP Kamel-Toe did not get where she is just by blowing knowing the right people, but by BEING one of the right people.

Half-black and half-subcontinental,
her assets were largely pigmental
and gender-related,
for people who hated
the Caucasian male Occidental.

As Vice President, Kamala Harris
did little except to embarass
herself, and that “bong”
that you hear is the gong.
(You remember that show with Chuck Barris?)

And the guy even has his punctuation straight, in a limerick! Nice job.


PS: There were 2 other commenters I remember that used to put in good limericks in those comments, "The Limerick King" (naturally) and "(Not) Eustace Tilley" or something like that, for the 2nd guy's handle. I think Mr. Desanex is number 1 at it. Thank you, Sir.


* We dodged a bullet with Geraldine Ferraro back in 1984, and might have gotten lucky with Sarah Palin in 2008, if "Maverick" scumbag Juan McAmnesty had won the election but kicked it 9 years earlier.

Caucasian Replacement Theory
PS The Gong Show needs to return to West Zimbabwe or Chiquitastan the golden indispensable third world turd!
Maybe not in the soft weak snowflake era as it would be offensive to three people on TwatFaceGram and banned in the spirit of the not mandatory for now collective unity.
The unity spiel is so cute after the divide and conquer burn it all down Fundamental Transformation but comrade Karl Marx did say that peace means the absence of opposition to socialism.
Barry Hussein nailed the Kamal pick and he loves it as Let's Go Brandon face plants hard and delivers the North America "prize" to the CCP.
Caligula would laugh until his side hurt at the distinguished evolved lightworker Wakanda builders in the most worthless feckless traitorous government in human history.
Moderator
PS: Alarmist, I never heard her speak much (from what people say, maybe to my benefit), but Sarah Palin was something else. It's the only reason I even thought about punching the chad, or however we did it, for McAmnesty. I couldn't though - voted L.

Hah, the URL has go the humor embedded. Thanks.
The Alarmist
PS

Wanna bet Caribou Barbie could have taken Hanoi Johnny out from a mile-and-a-half with a 50 cal sniper rifle while sitting in the door of an old UH-1?

And now, your daily dose of zen from the Bee: