We'll switch from the TV form of media to the motion picture (there's a golden oldie of a term!) form for a post here. Peak Stupidity has covered the point to be made here once already 3 1/2 years back with the post Tried to watch a movie - here's 3 reviews in one!

Here's my problem. Though I use the term and the topic key Political Correctness, which was fine even 5 years ago at the beginning of this blog, it's really the wokeness that bothers me. That comes in anti-White racial form much of the time. I can put up with some PC language by the characters, but when I'm forced to watch non-White actors and actresses take over the whole movie, that's simply a non-starter for me, or an exit-out-and-restarter, I should say. If I wanted to watch a movie that SHOULD have black main characters, then I'll do so!

It was worse than that in the 2 movies that didn't take that were discussed in the older post. I could tell as soon as I got to the first scene with the black characters in each of them that part of the plot or even the movie's major theme would be that these black people were being treated badly by the evil White Man. A slight difference here, as compared to that older post is that this post is about watching (OK trying to watch) movies on the airliner next-row seat back on a fairly long flight. The difference is that (for me, cause I'm not on Netflix, Hulu, any of them, at home) on the airplane I can pick and/or change them out more easily.


The image for the blurb on the small screen: 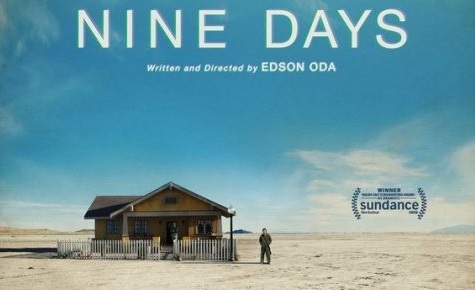 Great! They had this movie called Nine Days that I noted from the blurb was about reincarnation. Cool, I really like the few movies out there about reincarnation. I haven't written a review on it, but my favorite is one from 1987 called Made in Heaven. It's somewhat of a chick-flick, one might claim, but I loved this one and highly recommend it. Yes, there's a bright young black man involved in the scenes in the various places (I won't spoil it). Of course, he's a super nice and friendly sort, but at least back in 1987 his being there wasn't part of an agenda.

I really gave Nine Days a chance. Through about 10 minutes, I watched the black guy who I wasn't sure would be the main character yet. "OK, well I can live with this", I thought. The scenes took place in a dark setting, which I hate in a movie, but things went on with the one guy and his occasionally present Oriental-looking colleague. I put up with it.


The ad or DVD cover of the movie, not shown with the blurb. 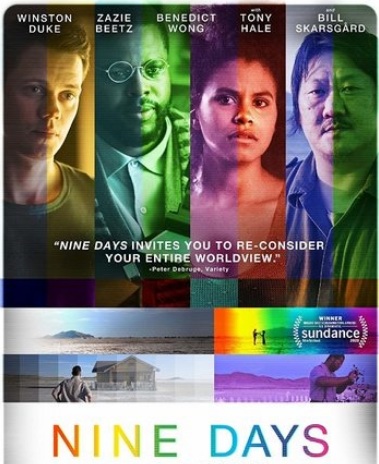 Well, NOW you tell me!

Then, of the set of characters that came next, having diversity was the obvious goal. The young black lady, pretty of course, was going to be the best of these characters and likely another important one in the movie to boot. That was it! A couple of mashes of virtual buttons on the touch screen, and a few faggy swipes later and I was in the middle of the one of my favorite WWII movies Patton. How convenient!


From one of my favorite scenes, with General Omar Bradley discussing Patton's effort to roll across Europe westbound toward Berlin: 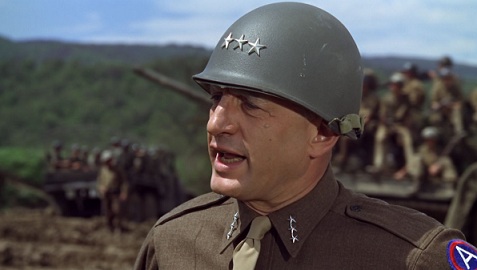 The movie was just there as an easy choice, even though I'd seen it at least 3 times already. You go back that far, and you don't have to wonder if you'll have to exit out. I didn't think about it at the time, but the movie Patton was made exactly 50 years before Nine Days. What a difference a half century makes, don't it?!

I just noticed that the movie Patton was first in my list of WWII movies that I COULD watch listed in that older post vs. the one I described called The Void. Not only that, but Patton has discussion about reincarnation too. Of course, I made sure to watch those scenes again.

It's simple, I guess: Just pick movies that are at least half a century old, and you can't go wrong.


PS: I really like to watch movies that aren't that old, especially ones I've never heard of, but once you get past the mid-1990s, it's more miss than hit.

PPS: The opinion of this blog regarding WWII is not the conventional one, as the reader may hope. However, I do like those WWII movies. My favorite is one that doesn't really take sides anyway, The Bridge on the River Kwai. That one is 64 years old!

Mr. Blanc, I too thank you for the two book recommendations...

☮
Moderator
PS: Bill, at this point I get confused between NICS, CSI SUV, whatever-the-hell! I really haven't watched any of it in so long. What I have noticed is that the channels now will just fixate on one show (reruns often) for that niche but, I guess, solid audience. They'll be a channel with nothing but CSI, another with those Pawn Stars... I wish they'd have an "The Office", "Seinfeld", and "Rockford Files" channel.

Alarmist, I believe I've sen "9 1/2 Weeks" but not "9 Months". If nothing else I have listened to and enjoyed "99 Luft Balloons"! My favorite WWII movies realistic or not, possibly in order here of realism (more to less?):

"Patton"
"The Bridge on the River Kwai"
"The Dirty Dozen"
"Kelly's Heroes" (it's even got a hippie tank driver, before there even were hippies)

Mr. Blanc, you are definitely getting the better story from the books. I thank you for the 2 recommendations. I tell you what though, I LUV that "Patton" them music though.
MBlanc46
PS I grew up on WWII movies. Flying Tigers. 30 Seconds Over Tokyo. To Hell and Back. The Sands of Iwo Jima. I haven’t seen any of the recent ones, including Patton. Yeah, for me, that’s recent. From what I know of George C. Scott and of George Smith Patton, Jr., Scott simply isn’t Patton, physically or vocally (apparently Patton had a high-pitched voice). I’ve recently finished Patton’s War As I Knew It, which was excerpted from Patton’s notes and diaries right after the War. At the moment, I’m reading Martin Blumenson’s Patton’s War Papers, 1940–1945, which is excepts from the Patton papers with contextual commentary by Blumenson. Whilst it’s a rather greater investment than a two-hour movie, I’m pretty sure that I’m getting a much better picture of who and what George Patton was. His remarks about his contemporaries—Eisenhower, Bradley, Clark, Hodges, MIddleton, Montgomery, Alexander, Wilson, etc.—are worth the price of admission in themselves.
The Alarmist
PS

Your time would have been better spent watching “9½ Weeks” (Kim Basinger, hubba hubba) or “9 Months” (Julianne Moore at her finest) and derived far more entertainment value than “9 Days.” Or, as you did, you could just say “Nein” to nine-themed movies and move along to a different genre altogether, which you did.

They recently showed “Battle of the Bulge” here, but I had read extensively on it and they far more about the characters portrayed in it and found it to be totally cheesy. They showed that turd of a movie after “MacArthur,” which was a better film brought to life by Gregory Peck being up to bringing a larger than life character to the silver screen, but still kind of cheesy.

Patton was somewhat better, but only because George C. Scott breathed life into the principal character in a way that made him larger than the larger than life character himself.
Bill H
PS Weekly television drama is becoming unwatchable. Just watched an NCIS episode in which the plot revolved around a murdered Navy officer, but half the time was about whether or not a certain person should or should not buy a gun.

It was a sort of "to sleep or not to sleep" dialog amongst the entire cast about the merits of gun ownership, and a consensus that NOT owning a gun was righteous.

Of course, during that repeated admonition that guns are evil they shot several people, but while they did so they stayed on the socially pure message.
Moderator
PS: I haven't read much about Father Coughlin, Robert, though I guess that was the point. Especially in Germany, it was the fascists that stopped the Commies from taking over. That doesn't mean it necessarily had to be Fascism that had to come next, though. "Social Justice", huh? That's weird that the hard-left appropriated this term.

Thanks for the quick history lesson.

I also like that scene, "from one son of a bitch to another".
Robert
PS: I don't know what your 'The Big One' opinions are --- I couldn't find a WWII Topic Key --- get with it man --- but mine are closer to Father Coughlin's than most other people's.

I haven't actually listened to (or read) anything by him since the days of samidzat cassette tapes, but there is a book about him called 'The Father of Hate Radio' or some such.

From Wikipedia (which we all know is never biased):

After hinting at attacks on Jewish bankers, [i.e. 'International Bankers] [He wanted banking reform/ending the federal reserve] Coughlin began to use his radio program to broadcast antisemitic commentary. [Again international bankers] In the late 1930s, he supported some of the fascist policies of Adolf Hitler, Benito Mussolini, and Emperor Hirohito of Japan. [banking reform/labor law reform mostly in order to fight the commies] The broadcasts have been described as "a variation of the Fascist agenda applied to American culture".[pro national/pro worker/anti-communism/pro family/clean living and outdoor activities] His chief topics were political and economic rather than religious, using the slogan "Social Justice". [True] After the outbreak of World War II in Europe in 1939, the Roosevelt administration finally forced the cancellation of his radio program and forbade distribution by mail of his newspaper, Social Justice. [So, there was a time when the gummint was against Social Justice] [But they still like to supress ideas they don't like] Coughlin largely vanished from the public arena, working as a parish pastor until retiring in 1966. He died in 1979.

P.S. I really liked that scene with the Russkie at the banquet after the end of the war.