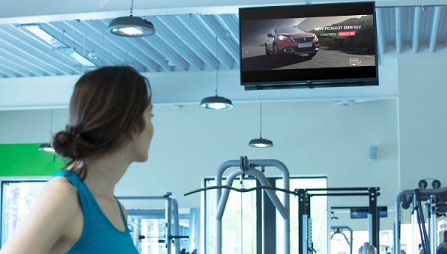 (I would have put up an image in which the TV had talking heads on, but this is the best I could find on short notice.)

This is why Peak Stupidity will never run out of stupidity to write about. It's called the TV, aka, "the idiot box" for the old-timers, but now on this blog, more appropriately "the idiot plate" due to flat-screen technology. Just 30 minutes in the gym each week seems to have gotten me 5 blog posts!

So that's how these bloggers do it! Then there's Steve Sailer, who gets his multiple daily post ideas much of the time from reading the on-line New York Times and Atlantic in his closet office. That's a bridge too far for this guy - I'll take the occasional bit of unwanted TV, thank you very much.

This is yet another post about boring events at the gym, but I promise you I have nothing about which to bad mouth the machines themselves.* The thing is, I can't always work out with the wall-mounted TV off. Physically I can, but with others in the room, often I can't for social reasons. Even the makers of the exercise machines themselves seem to really, really want us to watch TV, on their screens. Some of the best Precor brand machines do this, putting some TV in the background behind the work-out numbers, but I finally figured out how to nip that in the bud 2 years ago.

A couple working out were the only others in this gym. Since the remote control was located conveniently in the cup holder of the bike machine I was setting up on, I just clicked that OFF button. Haha, at first the two did not know what hit 'em. "What happened?" "I dunno, it just went off like THAT." Well, I cannot tell a lie... I mean, since they would go looking for that remote, and it would have gotten quite uncomfortable after a while hiding it under the only place I could think of ... "I just turned it off. Do you need it on?"

It seemed like they needed the TV on to do anything. I'll modify that some, because the woman did say a minute or two later, as they clicked around, "if we had some music, that'd be OK too." I get the idea of good music, maybe high-energy rock, to keep one in the mood. I'd just rather think my own thoughts, and keep up with how I'm doing, doable with the right kind of music, I suppose.

What this made me think about regarding those who want that TV on is "do they not like to live with the thoughts in their own heads?" Is that what it's about for the people that have the TV on in their homes throughout the day. I personally CAN'T STAND IT. It's simply inane.

The first thing that came on when one of the two of this work-out couple turned the TV on was, and I swear I'm not making this up: "What will happen to Madonna's dog?" See what I mean?

* We don't have a separate topic key for the exercise machine stupidity, but you will find them under the Artificial Stupidity topic key. That's due to the problems I have with them being electronics/software in nature.

Sounds like ground week at Benning, but at least they pay you for the privilege of abusing you.
Moderator
PS: That was damned funny, Bill! Thanks.

Come to think of it, read the following post on that Lionel Shriver novel. You may want to read this one.
Moderator
PS: Thanks for that video, Mr. Hail. Without the internet, it would be very difficult for anyone outside that local are to know this rally happened.

I am pretty much used to the idea that the national (and mostly, the local) TV news shows only what goes along with the Establishment narrative. My problem being illustrated by that under 1/2 an hour in front of the boob tube (thanks, Mr. Blanc) is that it is such a big distraction for most Americans. It's a distraction of their time that could be better spent seeking out the truth.
Bill H
PS The place I work out has no television. It does have personal trainers screaming, "Two more times, You can do it." One of those trainers is screaming at me. Sometimes I'd rather have the television.
Hail
PS

I think many copies are circulating on social media amounts to at least tens of thousands of views, but banned on/by the big-kahuna that is Youtube.

It's a non-starter to even talk of such a video ever airing on "TV," a fact which I suspect may be one of Mr Achmed "Moderator" Newman's reasons for resenting the presence of TV, a consistent view I have heard from him over several years reading his various writings.
Adam Smith
PS: Thanks for the interesting video Mr. Hail. ☮
Hail
PS

imagine if you saw things like this on TV:

"Waukesha protesters demand hate crime charge against BLM terror suspect, rally at courthouse"
Dieter Kief
PS - OT - I've read a scentific paper a few days back about the different cognitive - öh: strategies of men and women. Men want things to be done and go ahead whereas women look at how it's done and - especially whether there is some unresolved rest. The unresolved rests (= that the solution might not be perfect) don't bother men so much, but seem to be rather important for women. - Did somebody read this paper too - and remember where? - - -

Mod _ This Madonna story is quite telling in that it is not only Madonna these people - care for - but her pets even - I should have pointed out this special aspect of this story. (- This is the kind of sentences that make good novels wothwhile reading - or essays/ features - or blog posts, hehe.)

MBlanc46 - thanks.
Adam Smith
PS: You're welcome, Mr. Moderator. ☮
Moderator
PS: I figured it had been you that gave me that tip but wasn't completely sure. Thanks again, Adam!
Adam Smith
PS: Good morning...

☮
MBlanc46
PS Also known as the Boob Tube. Formerly, “boob” in the sense of “idiot”. Apparently, these days also in the sense of “fat deposits around the mammary glands”. Dieter: Please pardon the pedantry, but it’s Riesman.
Moderator
PS: Yeah, that Madonna story was Peak Stupidity GOLD, Dieter, and it came on as soon as someone mashed the power button.

Alarmist, you or another commenter mentioned this to me before. Thanks for the reminder. If it's really small, that'd be a whole lot of fun!
The Alarmist
PS

For those times when you can’t find the gym’s TV remote, you can take one of those mini universal remotes that can be set to scan for the right command code by repeatedly sendin “off” commands until it turns the set off.
Dieter Kief
PS - Madonna's dog ist the perfect example Mod. TV supplies The (highly mobile and thus...) Lonely Crowd (David Riesmann) with (care-free!) relatives.