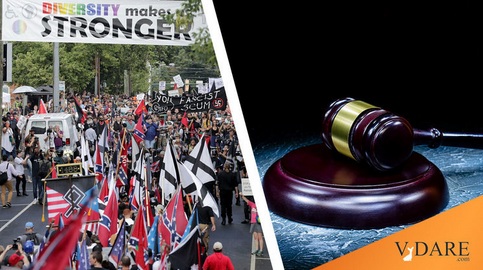 (Graphic taken directly from VDare, as usual. Thanks, guys!)

In the 2nd of 3 of what Peak Stupidity considers important court trials* that started and have been ongoing around the same time this fall, America took a loss. One could say that this civil trial, just held and finished over 4 years after the Charlottesville, Virginia street battle August '17 is not so important as the other 2, as nobody is going to jail. (Of course, the Tyranny side of the Anarcho-Tyranny DID send some on the alt-right to jail, leaving the ctrl-left to on home after all the mayhem they caused that summer day.**)

The alt-right, Conservatives, Libertarians, and Constitutionalists have just lost this one. VDare's Neil Kumar*** just reported SINES V. KESSLER: The First Amendment No Longer Applies To Whites. The plaintiffs in this case sued for "injury" from being hurt by the speech of Mr. Kessler, et al. What a sickening concept that is for me and would be for the Founders of this country. Nah, but the plaintiff's put it thusly:

The two claims which resulted in a deadlock involved conspiracy to commit racially motivated violence in violation of federal law. The plaintiffs’ lead attorney, the vile Roberta Kaplan, has already vowed to continue pursuing them. [My bolding.]

What struck me the most from Mr. Kumar's article is the sheer difference in the amount of money that the ctrl-left backers of this case have compared to how much the alt-right defenders have , errr HAD:

The financial disparity between the plaintiffs and the defendants was vast. As Glen Allen of the Free Expression Foundation explained:

Three large New York City law firms and 38 lawyers, led by Roberta Kaplan, entered appearances for the plaintiffs. These three law firms comprised over 1300 lawyers altogether and had income in 2020 of approximately $1.9 billion. Moreover, Ms. Kaplan was able to fundraise an amount probably in excess of $25 million to pay for the litigation, a staggering sum by any reckoning but especially so given that many of the plaintiffs’ law firms offered their services pro bono.

The defendants, by stark contrast, have encountered huge obstacles to obtaining adequate representation. First, given hostile media accounts, antifa threats, and the defendants’ unpopular ideology or perceived ideology, few lawyers would even consider representing them. …Second, even if the defendants could find willing counsel, in most cases they could not pay the high legal costs the plaintiffs intended to impose, and did impose, by their scorched earth litigation. Few defendants had significant wealth and most found their ability to raise money through crowdfunding or other donation paths restricted or cut off by deplatforming, media hostility, and antifa harassment. As this case has at last, after three years, reached trial, most of the original 25 defendants have defaulted or are representing themselves [The Sines v. Kessler Lawfare Litigation: A National and Historic Disgrace, FreeExpressionFoundation.org, November 19, 2021].

Even without this Establishment lawfare, it's hard for the right to get organized. From here on, any support for the cause in terms of money ought to be given under that table. For the alt-right, it seems like young people with not much to lose asset-wise would be the ones who could stay in the fray here. What we all need to learn is how to move at least some of our money to safe places (trusted friends and family, hard and hard-to-steal assets, etc.) before we get too involved politically.

"Oh, 25 million is it? I got, let's see, there's $318 in this one account, I can sell my old Honda, but this nice car is my friend's. Let me pull off the couch cushions and oh, lookie here, I got $1.85 in coins and 4 Chucky Cheese tokens in my right front pants pocket. Oh, gonna garnish my wages for the next 875 years and put a lien on ... what now?" Yeah, it can get serious. Two words for you all: Gold, Bitchez!

I'm trying not to excerpt the whole article, but here's a good summary of what this result means:

The precedent this sets: from now on, if white Americans dare to exercise their right to assemble and protest for the redress of their grievances in our increasingly anti-white country, Leftist authorities can engineer mayhem (as they did in Charlottesville) and then use private civil plaintiffs to levy astronomical damages against the organizers, for the sole purpose of bankrupting said organizers.

In other words, this verdict, the Crown Jewel of all Leftist lawfare to date, will be used as a weapon to prevent any white Americans from exercising their First Amendment rights and organizing protests to defend their rights, their heritage, their very humanity.

Yes, this was a big loss. Do you see why Peak Stupidity frequently mentions the (Capitalized) Establishment being under complete ctrl-left control?

PS: Within 1/2 hour of finishing this post, I see that the Arbery case was lost too. I guess I'll write about the general trend here on Friday or Saturday. This is not a news site, and White People have had our quick moment of fun. For some, the payback was immediate, getting run over and maimed or killed in a parade on the streets of Waukesha, Wisconsin.

* I am no follower of legal issues, precedents, important cases, an so on, but so I do realize that there are many others that go on that are just not so high profile. This is not a legal blog, though we retain virtual lawyers to keep up site immunity from the pestilence of lawfare. By "virtually", I do mean virtually, as this is going on pretty much within the offices and legal venue existing inside this blogger's head.

** One of the young men that was just sued in this court trail was Jason Kessler, he of Sines v Kessler. He has been reporting on what happened that day and the legal warfare of the ctrl-left since, with lots that can be read on VDare here. I imagine he's just too pissed at this latest turn of events to write right now.

*** I'm almost positive that "Neil Kumar" is not this gentleman's real name, maybe "Neil" but not "Kumar", as per his VDare bio page: Neil Kumar is a law student who lives in the Arkansas Ozarks. He is a member of the Sons of Confederate Veterans and Sons of the American Revolution, with blood that has been Southern since the seventeenth century.

Moderator
PS: Mr. Cæsar, did you see a picture of him that would lead you to that conclusion? I'm just wondering, as I have no idea. "Neil" for "Sunil" is pretty creative.

If that is the case, good on him, if he identifies with the Confederate side of the family! That's not always the way to "fit in" anymore.
Adam Smith
PS: Good day gentlemen...

I was called for jury duty once. When I informed them of my belief in jury nullification I was promptly dismissed.

I have never been summoned again.

Alarmist, you would want me on your jury as I believe in doing jury duty and exercise the option to use jury nullification as a method to counter government overreach.
Reg Cæsar
PS

I'm almost positive that "Neil Kumar" is not this gentleman's real name, maybe "Neil" but not "Kumar", as per his VDare bio page

He maybe one of those half-breeds who identify more with their American side. They do exist-- I met a Raj who did.

I bet "Neil" is for the common Sunil, which embarrasses him.
Moderator
PS: Alarmist, I agree.

I may have written this in a post, but there was a period in my life during which I had plenty of time to go to court and could have really used the money. I got chosen one time, than struck from the jury due to the usual - having a decent occupation (just not occupied with it at the time!) or something. I stayed around for an extra hour or two to collect my 15 bucks, rather than wait for it to come in the mail.

Then, years later, I had times in which I simply couldn't go without losing out on some good money AND causing grief for the people who arrange the work schedule. I'd get a letter every year for a while then. I wrote them saying "hey, why didn't you people write me in 1995, dammit!"
The Alarmist
PS

Too many on the right confuse the legal system for a system of justice. They might occasionally win in the court of public opinion, but rarely in actual courts of “justice.”

As for trial by a jury of my peers, if they cannot get out of jury duty, they certainly aren’t my peers ... but shame on me, because that means I was a part of the problem.