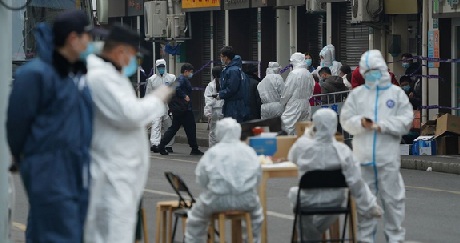 Two weeks ago, under the extremely-anti-vax article Excess Deaths Point to Depopulation Agenda on The Unz Review by the anti-Panic writer Mike Whitney, I came across a few anecdotal comments that mention the situation in China. (It's a long thread - there are currently 643 comments under the article!) Because this blog has a special fixation with things Chinese I was interested in one particular comment by commenter "Erebus".

Mr. Erebus' take on the situation in China, not just with respect to the Flu Manchu but general Totalitarianism in China, is not one I particularly agree completely with. However, I have not been to that Eastern land for ~ 4 years, so, I figure he may have a more recent take. (That is especially important that my last time spent there was, of course, well before this latest excuse for "MOAR control, everywhere, by everyone!") We don't know this the guy going by the handle "Erebus" lives in China or anywhere near there, or has ever even visited. However, though I haven't agreed with this guy on some things in the past, he comes across as pretty honest, and he's civil about his opinions too.

Therefore, I present his quick take on life in China in the aftermath(?) of this world PanicFest. I have plenty to say about his take, but I'll leave that for another post to come shortly*:

They’d been living with State ID for centuries with the Hukou (户口) residence registration system and have been carrying a state ID card for decades. All that started migrating to the smart phone some years ago, and there’s moves afoot to abolish the old Hukou system. When SARS-2 rolled out the digital ID evolved rapidly to include a “health” function.

That function (afaict) principally indicates that you haven’t been in any hotspots recently (or at least your phone hasn’t). Venues such as airports, rail stations, hospitals, some hotels and all govt buildings require you to pull up a green code before entering. The only commercial enterprise I know of that asks for it currently is Walmart. Temperature checks remain pretty common, though a fraction of what they were a year ago when they were everywhere.

Where all that is less so is in the countryside. Rural areas still have “off-line” stores & markets and some villages are panicked about the virus. Locals have a lot of autonomy and in many cases make up rules as they see fit.

The big differences with the RoW are:

– There is no vaxx mandate or threat of one. The vaccines were heavily promoted when they first rolled out and some local officials tried to improve their numbers by making it mandatory for govt & medical workers and certain industries. The national govt soon banned the practice and it’s been strictly voluntary since. Vaccine promotion has pretty much died out.

BTW, vaccinations were not available to anyone over 60 or under 18 until Aug 2021 when some regions began rolling out programs for 12-17 yr olds and over-60s. Again voluntary, and under 18 yr olds must have a consent form signed by their accompanying parent/legal guardian.

– Local lockdowns around local outbreaks has been the Chinese strategy since Wuhan opened 17 mos ago. These have been as small as locking down a single apartment building, to city districts (boroughs) but I’m not aware of a lockdown that covered a whole city since Wuhan, and such lockdowns as have occurred lasted 2-3 weeks unless new cases arose.

That's the entirety of the comment. I'll have plenty to add, but it seems at least a fair unbiased view. I need to add here the quick note that Mr. Erebus' "RoW" means the Rest of the World. Another commenter asked, and I'm glad, as I wouldn't have caught the meaning either, as obvious as it is to me now.

* I hate to break it up like this, but with a specifically timely post coming tomorrow, and then Thanksgiving on Thursday, that'll be here on Friday at the earliest. I am itching to give my take now, though! (However, the posts of gotten way too long lately!)

Moderator
PS: Thanks for the link, Dieter. I just took a look at it.
Dieter Kief
PS: Infection increase independent from the number of people vaccinated as new study shows

https://link.springer.com/article/10.1007/s10654-021-00808-7
Moderator
PS: Thanks, Mr. Ganderson. I guess the traveling part sucks, but I hope you have a happy Thanksgiving there in the great formerly-White North.
Ganderson
PS

Sounds about like what I hear from my son in Chengdu, Sichuan Province.

Happy Thanksgiving everyone- off to the airport… groan…
Moderator
PS: From what I've read and heard, the Covid-19 vaccine in China is of the traditional vaccine style, not the novel, experimental things that people are being jabbed with here.

However, as I'll put into the rebuttal post, things are not hunky-dory and happy over there in this regard. The Chinese have a much lower chance of resisting the Globalist Totalitarian control as do the people of the West.
The Alarmist
PS

Leaders who are serious about their country ... their nation ... surviving and thriving in the brave new world of the Great Reset will not require the Satanic Stab.