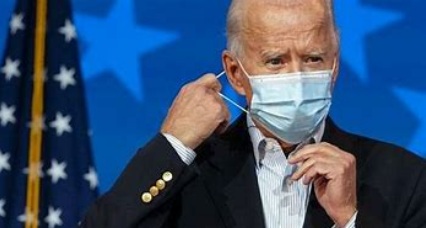 "What? Mr. President, could you say that again? You're coming through 1 by 2 with that stupid mask on."


It's another one of these "takes a lot of damn gall" pieces of hypocrisy that you get a lot lately. The Biden administration has threatened ("yeah, whatever" - the Chinese) a diplomatic boycott of the coming Winter Olympics, to be held in Peking, China. That doesn't mean the American athletes won't participate, but just that the top US dignitaries won't make it. Oh, too bad - the CCP will have to pay serious postage to sent some more Hunter video by personal courier instead of handing it directly to Jan Psaki.

The Daily Caller explains that this is due to the Chinese government's treatment of the Uighurs. These Moslems in the northwest of (well, what's now) China, the high desert/mountain area of Xinjiang, are indeed being treated like shit. I could believe anything even Breitbart (here) says about the place, though they seem to be more anti-China in general than that country warrants.

Be all that as it may, what takes the cake is that this administration brought up Human Rights to another country while there are many dozens and possibly hundreds of Political Prisoners held right in downtown F.S.* itself for most of a year without having been tried!** China may have much more than a proverbial mote in its eye, but you need to take the log out of your own eye, Mr. President. We're gonna need it for later, when we shove it up your ass instead, on behalf of the 1/6 Political Prisoners.


PS: The reader may very well want to know why Peak Stupidity still insists on "Zhou Bai Dien" then, seeing as he is at odds with China. I think he has the new Neocons like UN Ambassador Nikki Haley and Senator Tom Cotton on his ass about this. It's just talk. I see no action against China on things that matter like trade. I really think if the Chinese say "jump", Joe Biden will, well, he'll ask "can I go potty now?", as his handlers ask "how high, Sir?!"

** In the meantime, the only one that murdered anyone at the Capitol last January 6th is free as a Byrd - that is Michael Leroy Byrd, the murderer of Ashli Babbitt.

MBlanc46
PS Robert: There used to be a smallish billboard along I-80 in northwest Indiana. that read, “Get the US out of the UN and the UN out of the US”. I haven’t driven that route in years, so I don’t know for a fact whether the sign is still there. As far as the “diplomatic boycott” goes, that’s fake and gay even by Biden-Harris standards.
Moderator
PS: Yep, Robert. I've seen it as "UN out of the US and US out of the UN". We don't even want the organization to meet here.

(I never saw it on the barns, just bumper stickers. Thanks for the memory.)
Robert
PS: Top US Dingleberries out of US Now!