Yeah, and screw the White Man in the process. In the 2nd of our quick series of "Hey, read this!" posts, I refer the reader to Peak Stupidity's favorite literary pundit, Miss Ann Coulter. She misfire's on a cylinder every 1,000 miles or so, not even enough to warrant plugging into her OBD-II port*.

Miss Coulter tells us Biden's "Build Back Bigger" Is Anti-White Racial Socialism, in her 2nd-to-latest column**.


Per Miss Coulter, this cartoon from a Biden Administration press release about the bill, shows "Linda", who looks almost White. That's a first! See, this is to get you to tell your Congresscreature to vote "Yea". 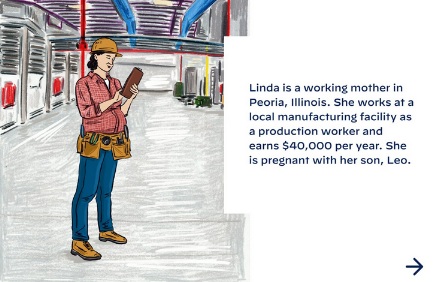 Hmmm, what about the Dad?

First of all, there's no building of anything in this bill. The word "infrastructure" doesn't mean what these assholes tell us it means. Even then, it's not about us.

One thing White House’s official press release did not mention is that almost all of the $2 trillion doled out under BBB is expressly designated for Black, Latino, Native American, Asian American, Pacific Islander and non-English speaking individuals. White Americans will get nothing and like it.

Miss Coulter give us 8 such examples, which, in total, add up to the tremendous amount of $2 Billion. Well, that's peanuts nowadays. It's 0.1% of the spending in this bill. But, wait...

She being an astute lawyer, I don't doubt that Ann Coulter went through this bill. It's not something I would do, even on the Ann Coulter pay scale. If I could get the same money for cleaning out sewer lines for a day, I think I'd go for the latter. Anyway, she is not stupid, so I'm guessing she sees the bigger picture, money-wise, of how this money will be spread in bigger amounts to anyone but White people.

It is nothing but a transfer of wealth from the White man to the non-white. I was about to correct that and write "transfer of some of our income, in the form of taxes", but who am I kidding? Taxes don't cover all this. It comes from just more borrowing. It won't be paid off, but the loss of value of the currency means Americans lose wealth due to the quickly decreasing value of the US Dollar.

The number I read was $1.85 Trillion for this latest largess. Interest at a more natural 7% rather than that rate artificially-reduced to 1% by the FED, would mean $130 Billion more interest would be needed per year. That's a significant portion of the $3 Trillion or so collected in taxes, just for this one bill. Now, that's just if we disregard the idea of it actually getting, like PAID BACK, or something. No, this stuff can't go on.

About the recipients of this generous Feral Gov't largess, Miss Coulter asks:

What the hell happened to Linda?

She then answers that question:

Linda is wearing a hardhat, so her job has probably been outsourced. Maybe she’ll be helped by BBB’s humongous expansion of the Trade Adjustment Assistance program (TAA). That’s the law passed in the 1960s to compensate American workers whose jobs have been shipped abroad by globalist swine who couldn’t care less about their fellow Americans and don’t mind that every single thing we need, including masks and medicine, is made in China.

In fact, the BBB hijacks the whole idea of compensating globalism’s losers and turns the TAA into just another massive welfare scheme. Both the eligibility requirements and payment amounts are expanded beyond all reason, entitling “workers” to years and years of payouts, with no minimum employment period required, and no stipulation that trade has anything to do with the loss of their jobs.

Oh, it just passed in the house, as I read here on a site called Liberty Nation. (At first glance, it seems to be a pretty good fiscal Libertarian-oriented site, with some Conservatism.) What's another 2 Trillion bucks, spread around among the non-priviledged? Hell, it even less than that. Don't you believe in charity? Well, we do! We're the US Feral Gov't, and we'll be charitable for you, you privileged misers, you!

No, we're not voting ourselves out of this.


* That's not what you think it is. I'm going on with the auto analogy - On Board Diagnostics - 2nd generation. What are they up to now? (On the one vehicle we have new enough to have any of this, hope we don't have to plug into it for another 50,000 miles!)

** The latest was about the trial of Kyle Rittenhouse, here, written 2 days before his acquittal. You can't go wrong reading 99% of her columns anyway.

Moderator
PS: Mr. Blanc, it's a race of 2 flavors of stupidity, to the very bottom.

What I say is, once the financial stupidity peaks as the SHTF, maybe this country can divide up into (what's NOW) more appropriate polities. I don't know how exactly, with the easiest divide being between urban and rural.

Mr. Hail, thank you for steering the readers and commenters over to the comments under the LeRoux song.
MBlanc46
PS I don’t claim to know what they think, but a reasonable guess is that they think they’re building an unassailable electoral base that will keep them in power permanently.* Those on our side of the divide are of the opinion that their fiscal and monetary shenanigans will crash the economy in the not-too-distant future. Our being correct won’t do us a whole lot of good, because we’re on the same sinking ship.

* They’re probably correct about this. Even if the “conservative” parties were actually fighting them, we’re probably past the point of no return.
Hail
PS

Many comments relating to the Ann Coulter commentary, the BBB financial burden, and the concept of One Trillion are under the next thread:

https://www.peakstupidity.com/index.php?post=2109
Moderator
PS: Were the Globalists behind Communism the last bunch of times, NSFYK? It's a thought I just had.

You gotta wonder about that. It's open news that the labs in both the US and China were doing "gain-of-function" research, which is no different than bio-weapons research, even if intended to be. Nothing is different but the logos on the paperwork and a sign on the "campus". I had a post wondering innocently what the good of this gain-of-function is to begin with:

https://www.peakstupidity.com/index.php?post=1950
No Soup For You Kulak
PS The virus was made for the vaccine as part of the transhumanist depopulation agenda.
Something has made them push the pedal to the metal in order to install the global Soviet Bidenville favela shanty serf plantation.
As comrade kommissar Schwab (SPECTRE) has said...you will own nothing and like it.
Live in the shanty pod, eat the bugs, neofeudal serf plantation dystopian hellscape.
People like Coulter sounding the alarm is a good thing in the battle for the survival for humanity.