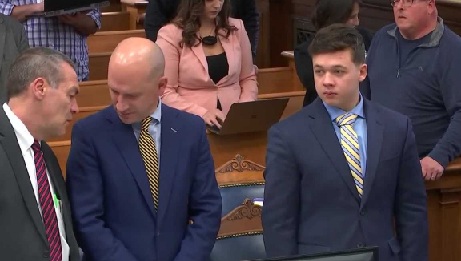 As I wrote in this post yesterday, the fact that Peak Stupidity has not spent much time discussing the Kyle Rittenhouse trial doesn't mean it's not extremely important. Most of our readers have likely found other, hopefully conservative/libertarian outlets to read about or watch parts of this trial. The name of the site is Peak Stupidity, after all, so we cover the stupidity more than the evil.

Just as an example of why I can't get myself to follow these (even the important) high profile court cases: I heard a little snippet of some question of Mr. Rittenhouse by one of the prosecutors. (Was it Binger?) This was on someone’s phone, some TV at the airport, I can’t remember exactly, from a couple of days ago, no less.

I know he’s only 17 y/o, and I think of better things to say later too, but I wish Kyle had said:

That is a small part of the reason I wouldn’t want to follow all of the details on TV. Blood pressure. High blood pressure induced by prosecutors I suppose “just doing their jobs”.

Kyle was a cool character out on the street that night, and it also takes a lot of cool to calmly answer that line of questioning. If I would have not been coached for hours on it, I’m guessing I would have called the prosecutor a retard early on.

It's not stupidity but evil that in a supposed Constitutional Republic like America, Kyle Rittenhouse would have to defend his actions in Kenosha, Wisconsin that 2020 August night to begin with. We all know his actions were obviously done in urgent self defense.

We await the verdict now, just as a Presidential election result. The outcome of this trial is very important. If Kyle gets convicted on a murder charge, Americans will know that the Establishment – Feral Gov’t, local government, law enforcement, “justice” system, and all the rest – will throw the book at them for defending their culture (Charlottesville trials), their property (Brunswick, GA trial), and their very lives (in this one).

That would make most Americans stand down and let Totalitarianism reign, as most Americans have been seen to be cowardly, so far. However, those who are not will understand that it’s an all or nothing thing now, with patriots against the entire establishment. There are people who will take this to heart. Some of these people don’t post on blogs about any of this. These are the types that, if they do, will tell you that “after the first one, the rest are free.”

Hopefully, there will be an acquittal. Riots or no riots, many more Americans will be out there with rifles to defend their property and lives than before the unpleasantness in Kenosha.

This trial has been a long shot for the ctrl-left Establishment. I am very glad that the lead prosecutor looked like he may as well have been picked by someone on our side. If this goes the wrong way, it may be because the ctrl-left and the Lyin' Press sycophants have made indirect but obvious threats to the jurors. There's no belief in rule of law there, just mob tactics.

If Kyle is found guilty, well, at least Americans have no excuse for denying the truth about who is the ctrl-left Establishment that rules the country now.

Faux News always leaned to the left ... Shemp Smith was just a tip of the iceaberg on the news side. It’s the opinion side that draws the eyeballs, while the news folks pretend to be fair and unbalanced.

Chauvin was thrown under the bus because he was a cop caught in a very compromising pose that appeared to be the nn-judicial execution of an outnumbered and helpless black man. Given that many “conservative” commenters and hosts were already declaring it to be murder on day one, there was absolutely no upside.

Rittenhouse, OTOH, shot three jews (your call as to whether or not they qualify as White in the media) who quite plainly appeared to be attacking him... apart from the gun, he was the outbumbered party. If Rittenhouse’s assailants had been black, he would already be rotting in prison and Faux would be a part of the MSM Greek Chorus celebrating the swinging of the scales of justice.

If you ever wonder about the value of Faux to real conservatives, just remember that Rupert may have been a conservative, but the children now running the business are anything but.
Moderator
PS: Jimbobla, I see one hole in that plan though. If they try to burn the city down, I foresee a few hundred or more Kyle Rittenhouse's out there to do their best to stop it.
Jimbobla
PS Looks to me that the prosecution is designed to elicit a not guilty verdict so that the city burning can resume.
Hail
PS

"This trial has been a long shot for the ctrl-left Establishment."

True. But we should remember that the regime is more diffuse that just the Ctrl-Left, which is one street-muscle part of it but not the regime in its entirety.

How have the other actors of the regime treated the Rittenhouse case?

Some comments on Fox News and the Rittenhouse case and its framing:

I've paid special attention to how Fox frames issues of the day, especially since November 2020 when Fox News flipped against Trump and "called" the election for Biden.

Fox clearly sees itself as a political actor in its own right and not as a news-reportng agency. A political actor under some kind of sacred right (in effect, as one of the "estates" which power-share under the regime, as the three estates shared power, in theory, under the French ancien regime). This has been true for years, probably all throughout the 2000s and 2010s and still today, but it's somewhat easy to miss, especially or Fox News loyalists. A lot of them realized it in November and December 2020 and up to about mid-January 2021.

But it's been easy to miss Fox generally promotes itself to its viewers as an alternative and dissident voice. You'll often hear their hosts and regular commentators say things like "you'll only hear this (some anti-Left talking point, watered down) on Fox," which is clearly untrue but convincing to many viewers.

Anyway, I noticed an editorial diktat at FOX went out at some point on the Derek Chauvin case. At one point, overnight all of them either dropped whatever softline defense of Chauvin they were making, or flipped against him. One supposed right-wing commentator and regular declared Chauvin "obviously guilty of murder and we all knew it all along! There's no use in pretending otherwise anymore." This was shocking and seemingly a calculated big to demoralize the Right, Fox's siding with the Cultural Revolution people and BLM, with the mob. (Of course Chauvin was NOT guilty in any objective sense, but politically he was guilty, something between being guilty of a political crime and being scapegoated to appease a mob and symbolically crucified by the regime.)

With the Rittenhouse case in the past two weeks, everything I've seen suggests Fox's political bosses are FOR Rittenhouse, allowing and maybe even encouraging their heavy-hitters much leeway in taking a hard line in defense of Rittenhouse, more than they ever did for Chauvin or most of the other comparable cases in the past ten years. This may say something.

Of course, if Rittenhouse is convicted, the smart bet is Fox will probably eventually drop it, or even flip against him, given time, and several years from now say things about "that one right-wing racist vigilante now in prison for killing two protestors." This is totally predictable under the US system. Fox exists, seemingly, for this very purpose within the regime.

I've come to see Newsmax as filling a similar role, except for being leaner and meaner than Fox, harder on the attack at first and slower to flip after-the-fact, but always eventually flipping and conceding premises to the Left.

Heavy readers of political commentary on the Internet may not appreciate how important these cable news networks (still) are in agenda-setting.
Hail
PS

The Alarmist wrote: "I’d be surprised if they don’t find at least one count on which to convict."

People are saying that if Rittenhouse is found guilty, it is the end of any semblance of "free and fair trials" in the USA. I've seen multiple people say versions of this.

Why support a system that acts this way towards its own core population? It is in the moral right of the people oppressed by such a system to take up the Jeffersonian rhetorical flag and dissolve such putrid political bands that tie them down.
The Alarmist
PS

I started an OJ Simpson verdict pool way back when. My opening wager for a verdict was “Not Guilty, Day one in less than four hours,” which my whitebread colleaguesthought was preposterous. When they asked what I based this on, I simply said, “Do you think that Jury in the city that gave us Rodney King is going to convict OJ,” which was a PC way of saying the black man was going to get a pass.

Several things are operating against Rittenhouse here: 1) He’s a White male, 2) Who used a gun, 3) in a city that leans slightly liberal, e.g. full of goodwhites and scaredwhites, with 4) jurors not adequately sequestered from media, who 5) have seen public calls for doxxing them if they acquit. I’d be surprised if they don’t find at least one count on which to convict.

Even if the judge braves threats made againt him to direct a mistrial with prejudice, I would not be surprised to see him hunted down mercifully. In any case, his life will be made hellish, because he’s a bad boy who won’t get a lucrative book deal, as the media has closed ranks to support the narrative over profits.

We’re into the Great American Cultural Revolution, and Rittenhouse is one of the devils whose example will be made pour encourager les auteres to not follow in his footsteps.
Dieter Kief
PS - Agree Bill H - The mob as a representative of the woke zeitgeist. The coalition of the fringes establishing itself as the new normal - again (after the Derek Chauvin trial).
(Most impressive move in that: How the Hennepin County's pathologist was brought to retract his initial diagnosis, which said, that there was no neck-injury and no hints that George Floyd had not been able to breath properly as a consequence of Derek Chauvin's knee on his body).
Bill H
PS If Kyle gets convicted we will know that mob rule is what has replaced justice. Threats of violence produce a guilty verdict.