"It wasn't Johnny Sack, Pauli. Big Doc Bendovamano is tellin' me it was the Covid family. I want you to hit 'em hard, Pauli. Get three of your best guys. We knock out the whole family and, bada-bing, bada-boom, we take over the whole floor sticker protection bidness." 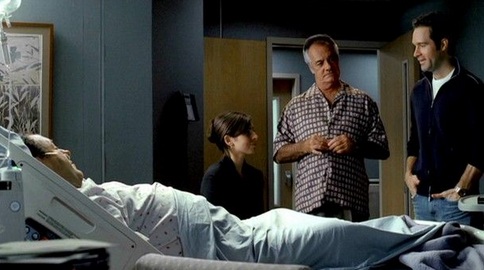 "Imagine my muddah! Yo, I wanna' see some serious co-morbidities, capiche?!"


The thing about Peak Stupidity is, we don't subscribe to that whole not nice to say "I told you so!" dogma. This one is doozy of an opportunity to exercise our lack of adherence to that. From a (pretty cool from a first glance at other headlines) site called Summit News, there is an article about some interesting Italian Kung Flu news. It tells us the Italian Institute of Health Drastically Reduces Its Official COVID Death Toll Number..

They do mean "DRASTIC", let me tell ya':

The Italian Higher Institute of Health has drastically reduced the country’s official COVID death toll number by over 97 per cent after changing the definition of a fatality to someone who died from COVID rather than with COVID.

Italian newspaper Il Tempo reports that the Institute has revised downward the number of people who have died from COVID rather than with COVID from 130,000 to under 4,000.

Of the of the 130,468 deaths registered as official COVID deaths since the start of the pandemic, only 3,783 are directly attributable to the virus alone.

“All the other Italians who lost their lives had from between one and five pre-existing diseases. Of those aged over 67 who died, 7% had more than three co-morbidities, and 18% at least two,” writes Young.

We panic deniers are still not outta the woods Pine Barrens in Jersey yet, paisanos. There's still those 3,783 in the old country, and who knows how few, errr, many in the families that might still get hit by the Covids or Tataglias, or Arterial Sclerotics.

Despite the change, Italy may yet take the decision to make the COVID-19 vaccine mandatory, although how such a scheme would be imposed remains unspecified.

Oh! Thinka my muddah! Looks like we're still gonna need a wartime consigliere. String along that Peak Stupidity guy for a while, Christopher. You give him a nice calzone, some of Carmela's pasta, and gallon bottle of Lambrusco once in a while, eh? He likes that shrink too, occasionally, what's her name, Jennifer. Next time a bunch of face diapers fall offa da truck somewheres in Hoboken, give Peak Stupidity summa that action. Dis ain't over!


We told you so, you hysterical panickers!

Dieter Kief
PS: Mr. Hail, thanks for the Italian context. -It's logical to bring up the baby facts. But curiously enough, nobody ever does it - in the world, it seems at times.(Well, I did mention one of the rare exceptions already, didn't I?)


There is a song about hail, I like  a lot - by - öhhh - Cassandra Wilson - trying to find the beautiful song Hail by her, I stumbled upon this example of an Alaskan Folk Dance Video(I kid you not - this is someth'n else!) - these Alaskans use Cassandra Wilson's Sankofa (low hi-fi-quality - but Eight Miles High on visuals, satisfaction guaranteed)

PS Mr. Hail, thanks for the Italian context. - It's logical to bring up the baby facts.But curiously enough, nobody ever does it - in the world, it seems at times.(Well, I did mention one of the remarkably rare exceptions, didn't I?)
Corona Moloch
PS: My gaping maw must be fed!
Hail
PS

Now to classify the Corona-deaths:

= grand total Corona-tagged deaths: 300,000 to 400,000 lost life years to Corona flu wave in Italy, a large majority from people not economically active or in family-formation stages (i.e., in retirement age)

This means we have an up to a 25x unfavorable trade balance, lives stolen from the unborn, in the Panickers' drive to feed Corona-Moloch. Since the effects of the Corona-Panic will linger, and even now nearing the two-year mark are still with us, this 25x number will increase, and doesn't even begin to touch the number of CoronaPanic-induced deaths, the vaccine deaths, and the wasted time from lockdowns and all the disruptions ("all life-years matter")...

We've known this from the start. Even in March 2020 this was known in outline, and probably in Italy before everywhere, in a government-data-confirmable way.

March 18, 2020: "More than 99% of Italy’s coronavirus fatalities were people who suffered from previous medical conditions, according to a study by the country’s national health authority."

"Almost 96% of the country’s virus fatalities had previous medical conditions, data from Italy’s ISS health institute show. The ISS, which publishes a range of studies on the outbreak including a detailed weekly report, confirms a trend seen since the beginning of the emergency, with the average age of Italians who’ve died from the virus at around 80."

This November 2021 report appears to simply restate and confirm the trend which Italy already reported in May 2020, holding at about the same percentage.

The same finding seems to be true everywhere. One study in New Jersey apparently found 89% of deaths had "do not resuscitate" orders, indicating very poor health. Another famous study looked at every single Corona-tagged death in the UK under age 18 and amazingly found that every one of them had some preexisting health problem or indication thereof.
The Alarmist
PS

Drosten is the guy who said the vaxxed shouldn’t be required to be tested, even though they can catch and transmit the infection as well as the unvaxxed, because they should get some benefit for engaging in the desired behaviour of getting vaxxed.

That tells you volumes about what this is all about.

The official response was never about science ... it is the servants of Satan using forked tongues to f**k humanity by getting them to willingly accept the mark of the beast.
MBlanc46
PS They gave the keyboard flunkies, etc., a chance to “debunk” the report.
MBlanc46
PS Well, this Italian report did not say that the this Institute reduced the “death toll from COVID-19” to only 3,000+. But what the report did say was that of the 130,000 odd who died “with COVID-19”, only 3,000+ did not have some comorbidity or other. That seems to me to be a pretty significant statement. That says to me that COVID-19 is not the Black Death. If you’re a healthy person, perhaps even a wrinkly such as I, COVID-19 might give you a very unpleasant week (and the couple of people that I know who’ve had it had just that), and in a few cases it might leave you with lasting health problems, but it very likely won’t kill you. And that is not what Those Who Rule Us have been telling us for the past year. It’s a shame that Il Tempo wasn’t more careful in its language, because they gave the keyboard flunkies of Those Who Rule Us to “debunk” the report.
Dieter Kief
PS
If you're right, Alarmist, the problem is solved! -

Except for that, I would love to know more about this Italian paper.
I've posted it in German blogs today - to no big effect so far.
German Super-Panicker virology-professor Christian Drosten declared today that - .N.o. - we are .n.o.t. living through a pandemic of the unvaccinated - - - the typical market-character who wants to just stay on top of the wave - no matter how this wave looks like?!

I'll have an eye on these things. - Strange enough they are.
The Alarmist
PS

Some fact checker somewhere said the revision was fake news, so it must be true ;)