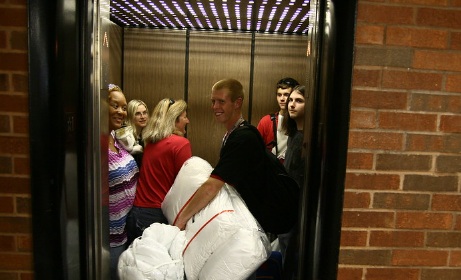 Peak Stupidity has written more than our share about the face masking stupidity aspect of the Kung Flu PanicFest. It's not that we think that is the worst aspect of it all, but it sure does show the cowardice and compliance of most Americans. As a commenter on the Unz Review wrote me in the comments, if Americans won't rebel against this form of coercion, will they ever rebel against the more serious things such as the holding of the January 6th political prisoners in Washington or the siccing of the FBI on school kid's parents who dare to speak up at school board meetings based on accusations of terrorism?

To change it up a tad, we'll switch to another indignity pushed upon us based on this ridiculous PanicFest. That is the Social Distancing stupidity. It's been since August of '20 since we've discussed social distancing in elevators, a niche topic, to be sure. That post was Scenes from the Kung Flu Summer re-Panic - Part 10.

A few days ago, I got on an elevator in a hotel that was already nearly full with a family of 6 when it arrived at my floor. There is some kind of exception to the highly ignored social distancing rules on the signs for families. Well, nobody was concerned. None of us had face masks on, including a hotel employee that got on at yet another floor. We were packed like sardines. Is 1 ft. the new 6 ft? Boy, I hope so. It was so pleasant to be around a crowd that all realized "enough stupidity is enough!"

Right before we got to the lobby I said "OK, let's all stay on our stickers now." Without face masks on, I could really tell that they liked that one! I looked after everybody left - the stickers were gone.

Here's an old scene from Seinfeld featuring an office elevator. It's Elaine and a Finnish writer, Elaine being the editor of the other's book, at least at the beginning of the scene...

Given all the voodoo we’ve been getting from official sources like Witch-Doctor Fauci for the last 20 months or so, who are we to laugh at astrologers?

Somewhere in this he predicts a gruesome end for a high level figure in the UK. It would be poetic justice if the mob took him to Tower Hill.

https://rumble.com/vorvoh-gregory-paul-martin.html
MBlanc46
PS It does seem that some folks are tiring of the masks/“social distancing” theater. But it remains to be seen whether Those Who Rule Us (at least where there are Blue regimes, which, of course, includes the US national government) will see the handwriting on the wall and begin to relent or, fearing the challenge to their power, double down. Doubling down would almost certainly mean some sort of enforced vaccination.
Soft Weak Fading Banana Republic
PS The globalists and CCP will get their "prize" of a fundamentally destroyed burned down by any means necessary banana republic Chiquitastan or former USA.
Voting harder won't matter because all apparatchiks are more equal in the glorious people's collective unity.
Evolved enlightened beings have decided what is best for you deplorable kulak untermenschen scum.