(Continued from Part 1, An Odious Proposal.) 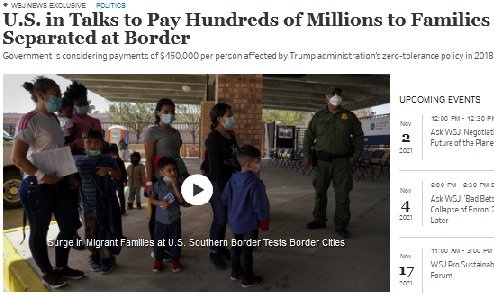 Here at Bob's Country Bunker the good old US of A, we got both kinds of ruination, replacement AND bankruptcy!* I understand, of course, that it's not the specific amount of money mentioned or estimated by the Bai Dien administration that will bankrupt (OK, "further bankrupt") us.

The Wall Street Journal article wants me to sign up to read it, so screw 'em, but this One Nation Blogger article Joe Biden Mulls $450K to Illegal Immigrants for Family Separation (and sorry for not providing the link last time) has some numbers. Depending on whether it's the Motherland Security or another branch of government, the ACLU, pissing and moaning about this separation of criminal families, there are either 2,800 or 5,500 children respectively, whose lucky lottery-winning parents should get nearly 1/2 a million bucks for each kid. In the grand scheme of Feral Gov't spending that's still peanuts, either $1.26 Billion or 2.48 Billion. Yeah, I mean it's only about 10% to 25% of what it would take to build a complete border barrier, which is still, like, peanuts. (Notice this free-spending administration** isn't even thinking about that.)

This proposed blowing of taxpayers money and rubbing it in the face of us taxpayers is setting a precedent though. Just as with the Feral Gov't's (Dept. of Justice) paying $80,000,000 to families with members shot by Dylann Roof in that Church in Charleston, SC, there's something different now. These monetary amounts are not being decided on in courts of law in civil trials. This is simply the Bai Dien administration flat out doling our money out on whims while Americans are struggling economically. Oh, sure, they have the excuse of a "faulty background check" for the latter and "Trump did this" for the former as reasons to just dole out settlements. This is complete bullshit, as anyone can see that this logic can be used to pay off anybody anytime, anywhere!

Secondly, more specifically, this latest illegal alien payout sets a precedent. Per Mr. Sailer's post's title, the incentive for more illegal families to get broken up like this and enter the country as millionaires - "we don't need to do no steeenking roofing, Senor!" - will guarantee that there will be more of this. There are hundreds of thousands of illegal entries per month now. The numbers could get up toward Trillion Dollar territory if the US Government regime deems it necessary. See, that's my question here. Are they purposefully trying to bankrupt the country?

I had thought the big idea was the replacement of the traditional American population. Don't get me wrong - that's been working swimmingly***. It looks like the US Gov't is making a concerted effort to go bankrupt at the same time.

You don't just go creating money in these huge amounts without prices of assets, goods and services going Sky High****. Since I missed out on that thread under the Steve Sailer post, I'll paste in a few comments from it here again. These ones relate specifically to the economic ruin that this Brazen Biden Border Bullshit will only exacerbate. One of my favorite commenters comes first:

Old Prude says:
This seems to a trend: Dump taxpayer dollars on the liberal pets: Illegals in NY State, the families of the victims of the Charleston church shooting, now criminal trespassers on the southern border. The one that really sets the teeth grinding is the cash being given to the family of the Afghan goat-herd zapped by Biden’s boys with the drone, so he could look like a hard-ass. “They will pay”.

Well guess what. A gaggle of incompetents in the intelligence community (but I repeat myself) targeted the wrong rag-head. So now who is paying? You and me, the middle class tax payer. And not only are we giving these wogs money, the government is going to bring them to our neighborhoods to crap up our communities. The jackasses who targeted the wrong family should be paying, but no: It’s you and me who had nothing whatsoever to do with this goat-rope. I hate this government.

Adept says:
@Wilkey
You have to laugh, I guess. This sort of payout would be a huge “fuck you” to middle America, and an accelerationist’s wet dream. It’s the sort of thing that won’t easily be forgiven or forgotten.

One of our Peak Stupidity commenters (also), PeterIke replies:

but within a few hours, handlers from the government and heavies from the ACLU stepped in to clarify that Biden was had not been informed about the program, that Biden misspoke, that the cash reparations plan for heroic and mistreated undocumented victims was "on."

@MrModerator, the USA has largely been looted already, some by Chinese and the rest by (((others))). Having run through the economies and social and political systems of the West, they’re swinging around now to deprive the remaining merchant class and individual workers of any hope of independence from their megalith by using lockdowns to drive most small businesses out of business and mandates to starve and force the rest of us into the serfdom that has thus far been willingly accepted by only half of the populace.

We also can’t ignore the 800 pound gorilla in room, which is that the criminal elite seem to think there are eight billion people in the world who should not be competing with them for the scarce resources they believe are rightfully theirs.

$450k is a drop in the bucket to release the krakken on the citizenry. RINOs seem to have no clue that the illegal votes they might cast are the least of the citizenry’s problems. In the end, most of the migrants and the citizenry end up dead before their time.
Hail
PS

Apropos of that prospective Great Sell-Off, a news article to bring to your attention:

Why an Oxford college is renaming itself for Vietnam's richest woman

The postgraduate-focused Linacre College will become Thao College after the first check from Sovico clears, the institution said Monday. So who is the tycoon replacing the 16th-century English doctor immortalized on school letterhead?

Thao became Vietnam's first self-made female billionaire after founding Vietjet, the controversial "bikini airline" known for the occasional scantily-clad flight attendant and for bringing budget travel to a communist country that used to rely on a state-owned carrier. Forbes pegs her wealth at $2.7 billion, which also comes from banking -- specifically HDBank -- along with real estate including resorts, energy projects and other holdings of Sovico, where she is chairwoman.

It seems the original name, Linacre, comes from a THOMAS LINACRE (1460-1524), curiously enough from Derbyshire, England -- because John Derbyshire is likely to comment on this kind of story and its symbolism.

This Linacre was a scholar of renown some five centuries ago, name replaced by a "bikini-airline" budget-airline billionaire from Southeast Asia!

People commenting on the story on social media are noting the symbolism. How can you avoid it?

Fair enough that the airline billionaire donation is qualitatively quite different from the "give billions directly to illegal immigrants as reparations," the symbolism is similar, a Great Sell-Off, "everything must go"-ism...
Moderator
PS: Mr. Hail: "There have been lots of chroniclers of this in our time, including PEAK STUPIDITY itself, the purpose of this website feels to me to be basically commenting on US decline, the unifying theme of most things published here."

Yeah, the idea of Peak Stupidity is not that it's all going to decline nicely because Americans will finally get together and do something about it all. As I've got spelled out in our humorous "About" page ("What is Peak Stooopidity?), I think it'll be the financial pain and political turmoil (probably with lots of violence) to come that will get people to concentrate on hard reality rather than the stupidity that is the biggest export of America right now.

In other words, I think Peak Financial Stupidity will cause a reduction in all the rest of it.

As far as the "sell-off", at some point, I would not be surprised if this country gets looted of it's many wonderful assets, as Russia got looted in the 1990s. If it happens, it will be the Chinese doing the looting, as they are the ones with the real money now (gained from manufacturing for the world). I have 6 posts on this (check the Economics topic key).
Hail
PS

"It looks like the US Gov't is making a concerted effort to go bankrupt at the same time."

It's an example of how the USA Left coalition as we know it in our time is inherently unstable. This is long one of Steve Sailer's themes, especially by the early 2010s. (But probably with the 2007-08 Obama campaign as a turning-point in his own thinking.)

The dominant and agenda-setting ruling coalition in the USA desperately needs a White-Christian-Male villain.

Big payouts to victims of White-Christian-Male Authority, who can be at least semi-plausibly be said to have been bullied in some way can get framed as crimes against humanity, as long as the White-Christian-Male is the implied evil actor. I know of no payouts to distant relatives of White-Christian victims of Islamic terror attacks or White victims of Black or immigrant mass shootings with "we support our racial brethren under attack" overtones, as in these cases like the $450,000 jackpot to a select group of illegal immigrants (cf. also the concept of the Diversity Visa).

Even as I write this it feels rather like a lazy analysis, but at its core it's the right one. It's the key to the dominant coalition in US culture and politics in our time. Politics always works around coalition building and this is the macro-scale example in our time.

Politically, it's effective. But the dilemma is this:

Without the White-Christian-Male's stabilizing presence -- in terms of running society (making things run, making things work, keeping things in relatively working order, in the USA these are mostly White-Christian-Males in the critical roles), in terms of anchoring society in reality, in terms of maintaining the commons, AND even now in terms the eternal political whipping-boy to unite a shaky coalition and give some facade or phantasm of unity-of-purpose --- without White-Christian-Male base holding the whole thing together, the USA risks a rapid-race-to-the-bottom in earnest of everyone grabbing and running, slashing and burning. A selling off of everything. A national clearance sale, everyone scrambling to grab something before it's gone, before lights out.

The huge payouts to sainted Victims of White-Christian-Males (no matter how tenuous) as a kind of ritual for the civic religion, it's an example of peering over the ledge, an effective political creating havoc when too successful.

There has already been a certain "Clearance Sale USA" feeling about things for some time. There have been lots of chroniclers of this in our time, including PEAK STUPIDITY itself, the purpose of this website feels to me to be basically commenting on US decline, the unifying theme of most things published here.

I again also point to Linh Dinh's book, which he compiled and wrote in the early-mid-2010s, POSTCARDS FROM THE END OF AMERICA. Whether you like or dislike Linh Dinh or his writing, he was commenting on exactly this, a "Clearance Sale USA, everything must go" feeling falling over much of the land, and then a few years later Trump came and seemed to overturn the money-lenders' tables.

Of course, the point is, if "Clearance Sale USA" becomes all there is, it really is all over and there is no pretense of any kind of unified country, no matter how much wealth still lingers around and no matter how many aircraft carrier groups or nuclear-warhead-tipped missiles. Dissolution of the Roman Empire time.
Moderator
PS: 2nd Timothy. Thanks, Robert.
Robert
PS: As St. Paul said, in one of my fathers favorite quotes:

[He] hath shewed me much evil: our Lord will reward him according to his works.