I've looked at the Service Economy from both sides now. 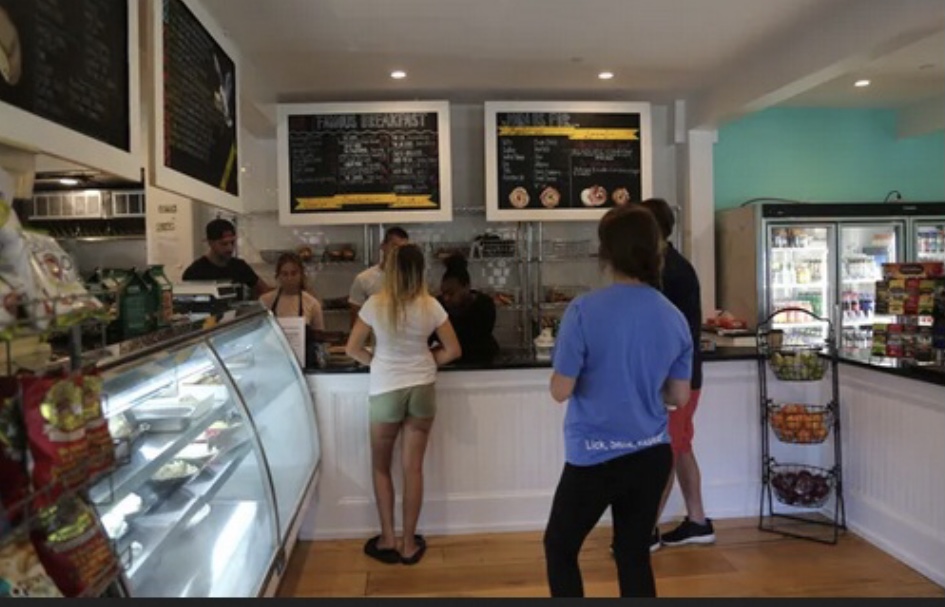 The Kung Flu PanicFest and the economic stranglehold that the Panickers have (purposefully or not) put on the US economy has not been the only reason for the continuing economic downfall, by any means. However, these LOCKDOWNs and other various and sundry arbitrary rules against business have accelerated the mess over the last year and a half. Contrary to what the out-of-touch elite politicians think, well, those of them who aren't up to this for purposeful destruction, it can't be flipped by to normal with the flip of a switch law.

Peak Stupidity has documented some of this damage to the service economy, which is most of the American economy, with anecdotes, such as, in the recent posts To the 3rd World - Warp Speed, Mr. Sulu! and The new normal of fewer personal interactions. In this post we will start with another anecdote but also add our take on the big picture and some sympathy and understanding of those young people in this service economy of ours.

First of all, as I've written before, I don't believe a big country like the United States can survive with an economy that is comprised of business such as a bunch of Americans serving each other gourmet hamburgers and craft beer. Real, serious amounts of WEALTH aren't being created this way. I am no latecomer to this concept. The reader may want to take himself back to nearly 30 years ago to the time of D-squad presidential candidate Paul Tsongas in our post Collapse of the Service Economy - Part 3*. (Yes, cool story, bro! Check out the footnote - that was fun.)

The anecdote comes first. At the airport terminal a month back, I went into one of these chain sandwich shops for something a little healthier than Wendy's, Chick-fil-a, or Five Guys (those "gourmet hamburgers" again?). The place had no gate down, as many do even in the busiest times due to employee problems. It looked open, but "well, we're open, but we don't have too much stuff". "OK, can I get a turkey and cheddar sandwich?" "We don't have mayo or lettuce or ..." "That's fine. How about turkey with cheddar?"

The young black lady started making the sandwich, and just the terrible attitude for anyone in customer service (to me, it was "I don't care if we work or sell stuff or not.") had me going "hey, if you're missing half the stuff, I ought to get a discount". "We don't have any change though." "How about 5 dollars?" She took the $5 which was at least 1/2 off. I don't think they really had the register even set up, nobody was getting sales tax or a record of this, and the girl likely pocketed the money. The sandwich was fine plain. However, more thoughts about our heading toward 3rd-Worldliness came to me, and this was in a hub airport terminal.

That year half year or year off on the unemployment cash has got lots of the service business labor not really up for going back to work or working hard. Whatever organizational skills there used to be seem to have dissipated.

Now, let's look at this all from the other side of the counter. At Starbucks there is a sign touting employment at this icon of the service industry. $12, that's TWELVE BUCKS an hour, but wait, you get the health plan, and you get to participate in some stock plan. The latter two things are not any big benefit worth rushing to get on wifi to fill out an app app. for. Young people don't get much out of health plans - as I wrote in this recent post, I didn't have health insurance as a young man for a good while (about 15 years, as I recall). A stock plan or options? Hey, this isn't 1982 Microsoft, it's an established Big Biz operation. Then too, the market WILL crash - it's a matter of when.

Going back to that US Gov't cash that was benevolently doled out, all that "free" money that was printed up entered the economy, and the same hourly wage from just before the Kung Flu PanicFest has already been made worth significantly less.

Regarding the numbers, Peak Stupidity has discussed regarding various and sundry goods and services, some very specific, and some that are a big part of our budgets, with our Inflation topic key. We keep coming up with numbers more like 4 to 5 % yearly, and that was before the latest big splurge by the money printers. We have learned about the substitution, hedonics, and other tricks (or solutions, if you will) that not necessarily designed to cover up for high numbers, but will often have that effect.

That aside, here's the big point: The minimum wage was made for teenage workers and others at the very low end. There were jobs back then with real wages that could support a middle class lifestyle. That was due to the fact that America was still the manufacturing powerhouse of the world, and the fact that massive immigration, legal and illegal, had not yet brought in the numbers that could greatly increase labor supply for the same demand, at the whim of Big Biz.

I have a memory from the late 1970s of hearing about the "ridiculous" union-bargained $17/hr. wage that auto workers were getting in Detroit. That was A LOT of dough, equivalent to $80 or $90 per hour in 2021 dollars by my estimate. Were these auto workers, seen by others as possibly not the best you could come up with, worth that money? Maybe not, but they got that wage!

One of those auto workers could have started at minimum wage in high school or just out of school, until he had a record of stable employment (or knew someone who would hand in a resume). Now, after 4 years barista-ing, you're not going to any job like that. The much fewer blue collar manufacturing jobs that are around pay, what, $15 or $20 hourly to start, a pittance compared to 40 years ago. The fact that Big Biz can get cheap illegal labor holds wages down.

Even if the young hard-working barista borrows $50 large for college, white collar job prospects will be much dimmer today, than they would have been 40 years ago. Oh, and he's got a near-mortgage-sized debt to boot.

"Oh, come on! You work during the summers for your college money, and you bootstrap your way to a good middle class income. That's what I did.", say those that were in said coffee barista's position 40 years back. Nah, I don't think so.

I don't go much for that generational divisiveness, as political opinions and attitudes mostly split with no huge majority for all generations. Maybe one could say that the Boomers just don't understand the Millennials predicament. OTOH, if I want to generalize, I should say "Hey, Millennials, why in the Sam Hill don't you people fight hard against the massive immigration invasion?! Why didn't you people support President Trump on one of his more serious moves, fighting for tariffs to stave off the flood of cheap Chinese imports, to help bolster American manufacturing?!"

Well, see, some of them probably do. The others, well, they are stupid. Stupidity does not skip generations.


PS: You may be expecting a Joni Mitchell song out of this post's title. We embedded a nice live version of Both Sides Now early on in this blog.

* Come to think of it, you may want to read the other 2 parts of that series on the idea of a service economy - Part 1 and Part 2.

** There's a table on this page written by one Jacques Sprenger, from 12 years back on the The Digerati Life site. It looks like they quit publishing anything in 2013.

Moderator
PS: I pretty much agree, John F. I should have written "whether planned or unplanned". I don't believe the virus itself was planned to be spread - it failed pretty miserably as a big killer. Yes, the big elites have used it to implement the PanicFest for their own benefit.

As to those in government (local or Fed) and in the press, many of them are stupid enough to have panicked and induced more panic on their own. Others, well, they were greedy for attention, power, and money, and valued those over truth or over making an effort to get at the truth that this was no Black Death 2.0.
JohnF
PS: "The Kung Flu PanicFest and the economic stranglehold that the Panickers have (purposefully or not) put on the US economy"

It’s the powerful financiers and billionaires who are behind this project which has contributed to the destabilization (Worldwide) of the real economy.

The FED used the Filthy Rich Politicians & Billionaires to Shut Down the Economy to Crush the Small Business's, Mom N Pop Stores & Church's as Non-Essential - But They Saved the MIC Complex of Too Big Too Fail/Jail Corporations & Banksters Where They Have All Their Investments with Trillions in Taxpayer Bailouts (Again).

Moderator
PS: Thanks, Bill. Some manufacturing was slowly going away in the mid-1980s - the compact cars, about all good cameras, etc., to the Japanese, but the real action started in the mid-1990s.

Robert, thanks for that info. I guess those guys are ahead even WITH all the inflation their Big Gov elite brethren have caused.

MBlanc, that's a good point. However, whether the stupidity comes from nurture or nature, I guess I could say it's still stupidity. ;-}
MBlanc46
PS Stupidity. Yeah, never discount stupidity. But also, do not discount that most people simply believe what they are told. And young people today are told by all authority figures, teachers, the corporate media, and a lot of parents, as well, that the Left are decent and caring, and that those who oppose the Left, no matter how slightly, are all Nazi murderers. It’s hard to fault them for believing what those they’re told to listen to.
Robert
PS: I can't find the page right now, but I read somewhere recently that in 1982 ninety million dollars would get you on the Forbes 400 richest americans list and 2 billion get you the number one spot. Now you need 3 billion dollars to even get on the list. So some people are still doing fine in this new economy. A rising tide lifts all boats, and all that.
Bill H
PS The "service economy" nonsense goes back to at least 1960 or so, in fact was being very favorably touted back then. My father, who died in 1984, took a dim view of it from the git go. "Hell," he said, "we can't all make a living selling each other hamburgers."

Indeed we can't, Dd, not even gourmet ones.