Really, no sarcasm, they're mostly good people. However, the culture of Islam is so much different than that of the Western societies, especially European, that, even with not a terrorist among them, this cannot end well. (However, when you don't control, or even keep track of, who enters your nation, you shouldn't be surprised that true enemies come through the gates mosey on in at their leisure with many plans of revenge or conquest in their heads.)

This map is off of a VDare.com article by James Kirkpatrick entitled Make Europe Great Again: Nationalism On The Rise—But Fast Enough?. 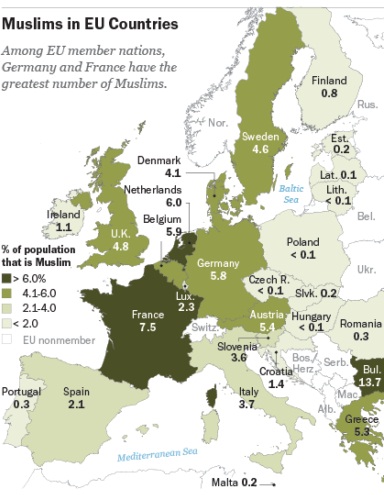 Here is a bar graph of the same information: 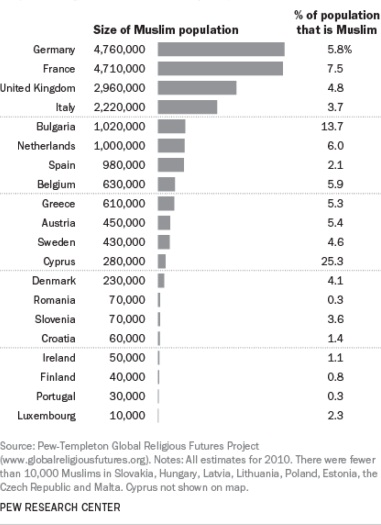 People are starting to get worried, even the "tolerant" Europeans.

Moderator
We have many stupid voters over here, don't get me wrong, but the voters in Europe are another level of stupid. A large bunch of them are still "scared at electing some nationalist, you know, Hitler was a nationalist", and they'd rather let this thing go past the turning point. Say what you want about the Nazi's, lot's of bad there, but at least they didn't have a freakin' prophet who married a 9 year-old and in Germany, goats were goats and people were people - no intersectionality there (as the kids say)

I guess I will take off my "coexist" sticker - as for my "Free Tibet" one, I will just add a few words to the right of it rather than peel off more bumper-cover paint:

"Free Tibet"+ "en Coffee - www.commie-coffee.commie"
Buck Turgidson
Those morons in Europe have ~5 years to decide if they are going to get some backbone and stop muzzie immigration and deport illegals -- or if their countries are going to implement sharia law and their children and grandchildren will be kneeling on prayer rugs. Sorry you stupid morons, there is no middle way or any stupid bumper sticker slogans like 'coexist' (BARF). You either save your country(s), or you don't. I wish you luck.