This is the 2nd post based on something overheard in an airplane cabin, and in fact, from the same flight as the previous one, Walking in Memphis. Peak Stupidity has a whole topic key to steer the reader toward stories of Customer Care. We use that term sarcastically, as this latest incarnation of what was previously called "customer service" does not really involve much caring on the part of anyone involved - the Big-Biz outfits who arrange for it, the agents themselves, and the customers who have to put up with it. 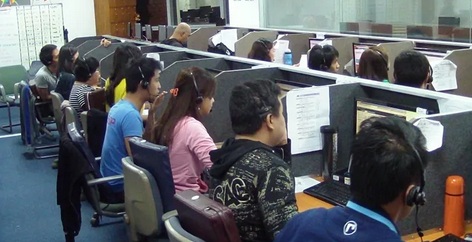 The latest trend, as I have found out through a number of calls recently - 2 were discussed in the post Has "Customer Care" just been fully outsourced? - seems to be an acceleration of the outsourcing of customer care operations, and to even more far-off locations with more far-off people with more far-off accents.

The guy I heard was likely talking to one of these newer operations. We were parked at the gate, mostly boarded up, when I heard the fellow in a seat somewhere behind me. (It was too crowded to really stand up and look for him.) From his side of the conversation, I learned that he had left something reasonably important in either his AVIS rent-a-car or the rent-a-car counter in the terminal. He was on the phone with one of these what they call "representatives" now, and sometimes "associates". The call was not going well.

Let me make a digression into lost items for a minute. There's one important point here. When you have lost some small important item, and you are pretty sure where you left it, you take care of it right now! No, not later on. There are plenty of honest people still in this country, but that's not the problem. It's the "chain of custody" a term that is normally used for police evidence or unaccompanied minors traveling, and things like that, which is the important thing. Someone finds the item and makes a conscientious effort to store it somewhere safe. Yeah, but he has to go home or away for that location. "Hey, I've got this lost purse here, in the drawer." Oh, but the next guy remembers there is an area set up for this stuff and moves it. He doesn't tell anyone or leave a note because that involves entirely too much conscientiousness, though he's still an honest guy. You get over there the next day, and even if the original finder is there, he can't find your stuff. Maybe a 3rd party is there, and without any note, he just tells you "we haven't seen it."

I have had the very same thing happen at the rent-a-car return lot, but my item wasn't very important. It was impossible to get anyone at that local office on the phone, even after I found the number. This guy was doing the right thing trying to get to the right person before an hour or two went by on with the flight in the air.

This was a medium-sized city we were leaving, which means the airport terminal had 10 to 15 gates, and the usual line of rent-a-car places downstairs all together. (It seems that AVIS has bought Payless, these other guys bought the other guys, and I wonder if it's all back to about 2 companies right now - all for the worse, I'd say.) Yes, the customer service agent (the term I'll use) obviously could not picture this simple thing. The man was telling him a number of times "no, no, there's only ONE place. It's the Avis office in REDACTED, RD! I need to get ahold of them now!"

The guy in the plane of the phone had started off very calm and polite. He couldn't keep that up. Whoever was on the other end was obviously only trained to deal with things that didn't require serious listening and understanding. Sure, he, or more likely she, could take a reservation, change a reservation, call a tow truck, and maybe take an accident report. Listening to what this guy was saying in plain English about his lost item and trying to get him to someone who could look for it quickly was apparently much too advanced. This was way, way off the script, so whaddya want from him? The last thing I heard was "Do you even speak English?!" I believe I might have smirked a tad.

Yeah, we all have to put up with the crap now, due to Big Biz wanting to have another year of double-digit earnings increases. Who cares if that guy never gets his stuff back? Who cares if people can't get their problems fixed, or if so, only with a lot of frustration, agitation, and harsh words?

That's our country in 2021. Let me contrast that with our country about a half century earlier, in the 1970s. I was a little boy on one of our family road trips to relatives about 3 or 4 hundred miles away. They had diners still back then, as I have one picture (barely) in my head still of this place. The weather was cool and rainy to where my Dad had brought along his gray trench coat. (Trench coats were still in back then.) He had hung it up on a coat rack at the diner, along with many others, before we ate.

My Dad grabbed a gray trench coat to put back on as we left, and I don't know what it was that clued him in, well down the road, that he'd taken the wrong one. The details are rather vague, but there either must have been a name and even phone number on or in that coat somewhere or my Dad looked up and called that diner*, as did the other fellow, because they were in touch on the phone by some point. Yes, people used to arrange stuff like that, before the age of cell phones, as regular human beings and not corporate associates. (For instance, possibly my Dad called the diner and told the hostess "if a guy calls about a gray trench coat, give him this number (at the relatives)".)

The way this call went was: "Oh, well I got yours, because, yes, they do look about the same." "OK, this one fits fine." "That's great. I'll keep this one, and you keep that one. Nice talking with you. Goodbye."

That's the America we had a half century ago. Let's not forget.


* Somehow, because it was in a city far away by then. I think now "how would you have looked up a number without the Yellow Pages for that city?" He may have called "Information", and talked to someone who speaks good English, understands it, and would actually gladly help!

Add Any Events I Missed??????
JohnF
PS: "I wonder if it's all back to about 2 companies right now"

That's What's Been Going On For at Least the Last Two Decades Since the 2000 Dot Com Bubble Collapse.

They All Keep Merging Together to Avoid 'Bankruptcy' & Following Any Accounting Principles - So That the 'Public' Remains in the 'Dark' About the MIC Complex of Too Big Too Fail/Jail Corporations & Banksters.!!!
Moderator
PS: Robert, I have heard that about the French. My experience outside of Paris was pretty good, but that was long ago. I guess we had it really good years ago, with a mostly unified population that could at least talk to each other with no problem. I wouldn't have been able to talk on the phone with them, though. HS French didn't stay with me, unfortunately.

AKCK, I'll have to look for that depository if I go through there again. I wonder who empties that out once in a while, the TSA? (It might help them, in fact...)

Strictly by the book, huh, Alarmist, no more and no less?

I remember my first experience with German customer service a couple decades ago, and while they were professional, they were perhaps only as helpful as the terms & conditions allowed, so I came away thinking: “You are the customer ... be glad you are served at all.”
Alles Klaar Comrade Kommissar
PS Fitting that no one is at the helm and the buck has been passed to who knows where when there is a basement hologram CCP/CPUSA puppet for preezy of the steezy.
Feckless incompetence is the default setting for egalitarian sewers, please make a note of it or try your call again later.
Please press 1 for Swahili, press 2 for Esperanto, press 3 for Gibberish.
Standards and proficiency are a construct of the white male capitalist imperialism.
Fun trivia-Denver has the drop your weed here box at the airport for skittish comrades flying back to states where the chronic isn't legal.
Robert
PS: Oh yes, what brought this to mind was your mention of calling 'information'. I knew the name of the hotel, but the number I had was wrong. Getting the number for french 'information' was not hard. Since, there were (apparently) more than one hotel with this name, and the one I (as it turned out) wanted was not the one in Paris, things got tricky quickly.
Robert
PS: Twenty-some years ago, I had to make an important call to someone who was staying in a VERY fancy (Louis whatever furniture, silk bed-sheets) french hotel. The French have a certain attitude, let us say, that makes these modern customer service people look good.