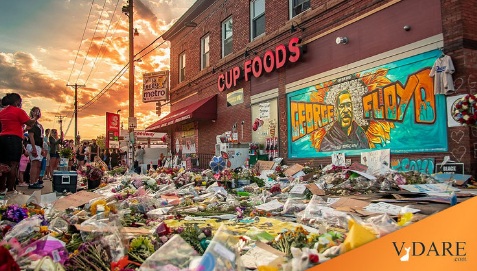 Wheewww! I spent 2 to 3 hours today reading and writing on this Ron Unz - Is the Tide Finally Starting to Turn on Covid as an American Biowarfare Attack? article. (Spoiler Alert: Who cares?! That's not the BIG STORY!)*

Therefore, I will just post a reference to a great Ann Coulter column (what's new?) today, though there's plenty of posts on the front burner.

They're Not Defending Their Best is about black political leaders and the black "community" in general defending black high-profile criminals and the worst of their criminal underclass in general. Miss Coulter does not use the word "tribal" though and instead blames it all on the politics of the Democrat Party. No doubt, she's got some good points regarding the new Anarcho-Tyranny (also, not a word she uses) that Soros and the ctrl-left have implemented to basically enable black criminals only to get away with, well, murder, among other things.

Miss Coulter does not mince words in this column:

No, there’s only one ethnic group that sacralizes its criminals. See if you can guess which one:

The examples of O.J. Simpson, George Floyd, and Breonna Taylor follow. Then:

Shades of Paul Kersey there.

Liberals have so elevated black people as our moral betters that they have fully adopted the values of disaffected urban youth.

The left firmly believes that African Americans should never suffer the consequences of their actions—even when the act is murder.

Yeah, but, right after that, one reads:

Whatever America owes black people for slavery and Jim Crow, it doesn’t owe them a Get-Out-of-Jail Free card.

Wait, Ann. We don't owe squat! I guess Miss Coulter is not over the idea of Affirmative Action. Will she ever give up on this small stubborn stupidity remnant within her?

Please don't let that one bit stop you from reading the whole column, if you haven't read it already.

OK, the title here is not completely right, but Ann Coulter is MOSTLY keeping it real.

* Thanks to Dieter Kief for telling me to not spend so much time on that site, or responding to Ron Unz's stuff, at least... though I ignored it, I will heed this in the future. Good advice, Dieter.

“The Arlington Texas shooter got out on $75,000 bond after shooting three people.”
“There will be no Rittenhouse treatment for this Sainted Jogger.”

It's okay, Barkevious was being “bullied” and we need to make room in our “over-crowded” prisons for White parents who raise their voices at school board meetings.

“The Villains of the Insurrection sit in jail awaiting trial.”

Many of the one-six “insurrection” plan-trusters are still locked up for taking selfies in the hallowed halls of Our Democracy™ while their phony tough guy hero pardoned a bunch of Jewish criminals instead.

“The only Get-Out-of-Jail-Free card on offer should be one stapled to a one-way ticket to the Dark Continent.”

I agree Mr. Alarmist, the only sane solution is repatriation.

Thanks for the link Mr. Ike.

☮
PeterIke
PS
OT, but this is a great blog, by a doctor, about how totally messed up our healthcare system is. And he points the finger very much at doctors too.

While “joggers” get to walk on bond after actually shooting people, the Villains of the Insurrection sit in jail awaiting trial.

The only Get-Out-of-Jail-Free card on offer should be one stapled to a one-way ticket to the Dark Continent.
West Zimbabwe
PS The Arlington Texas shooter got out on $75,000 bond after shooting three people.
Soros/Soetoro bonds?
There will be no Rittenhouse treatment for this Sainted Jogger.
We're all South Africans now.