Hail to You is back in bidness! 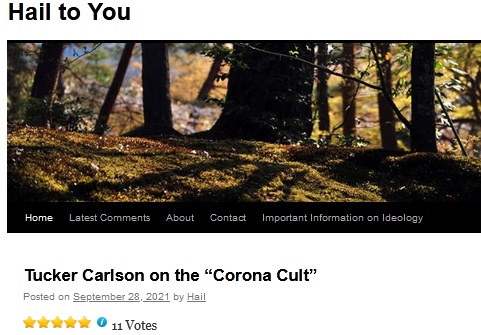 Mr. E.H. Hail, of the Hail to You blog, finally has another post up - this one is again about the very important issue going on all around us, the Kung Flu PanicFest. Mr. Hail is a commenter on this blog, but even his comments hadn't appeared for a long time till recently, and his last post on his site had been at the end of February of this year.

I had previously only put a link to Mr. Hail's latest post in a footnote of this Peak Stupidity post on the evil High Priestess of New York Covidiocy, Kathy Hochul. That was unfortunately just due to the fact that I was mostly through that post when I saw Mr. Hail's newest post on his own site. In that post, Tucker Carlson on the "Corona Cult", Mr. Hail continued with his long-ago-thought-out thesis that the people who are panicking over the Kung Flu are basically religious believers of this Hysteria. Mr. Carlson, Peak Stupidity's favorite TV/youtube pundit by a long shot, is down with this theory.

There are 41 comments under Mr. Hail's article already, with that Wordpress system that is reasonably user-friendly*, and is usable without any giving out of real identifying information.

I noticed that the Hail to You blog has a link to Mr. Hail's many comments on The Unz Review site. The comments, here, are in reverse chronological order, which makes sense**. Mr. Hail quit commenting there cold turkey sometime in May of '20, after Steve Sailer, where I knew his commentary from, for the most part, got sucked deep into the PanicFest. As for me, I have had a hard time quitting commenting there.

The reason I saw so many of Mr. Hail's comments just now that I agree with (and always did) without any [Agree]s or many replies from me is that I had also been turned off by the fixation of that Mr. Sailer's regarding the Kung Flu panic. I started reading only his non-COVID posts for a month or two. I did notice too that Mr. Hail and I, and others of you here, wrote comments under the excellent columns by the bloggers C.J. Hopkins*** and Mike Whitney. Both were very much anti-panickers.

We are glad Mr. Hail is back! You are a real asset to the Anti-Panic forces of America.

Peak Stupidity will have our own anecdotal, observational, critiques on the Kung Flu PanicFest, Season 3, this week, along with a few other areas of endeavor within the broad field of stupidity research. It should be a productive week here.

** Like everything else on the unz site, the functionality is VERY good.

*** C.J. Hopkins' columns were discontinued by unz in April of '21, but Ron Unz is very good about keeping the material available.

@MrModerator, that Raches dude on UR is by no means a suitable replacement for AE, and I didn’t even really care much for AE.
The Alarmist
PS

Assange gets all of what little media ink is spent on the erosion of freedom of thought, speech, and even movement, but we haven’t heard from CJ for a while. One can only wonder if he has been renditioned to a black site for his re-education and/or disposal.
Hail
PS

See one of his latest at:

In The Covidian Cult (Part I) and (Part II), I characterized the so-called “New Normal” as a “global totalitarian ideological movement.” Since I published those essays, more and more people have come to see it for what it is, not “insanity” or “an overreaction,” but, in fact, a new form of totalitarianism, a globalized, pathologized, depoliticized form, which is being systematically implemented under the guise of “protecting the public health.” (....)

Hopkins' full list of publications, and sites which republish his articles, is here:

You'll notice he has severed all reference to "Unz."

And then there is this highly interesting Client List of C. J. Hopkins:

https://consentfactory.org/client-list/
Moderator
PS: Mr. Hail, I have not read but maybe one of The Saker's articles. He is by far not the only purely-anti-American writer on that site... by a LONG shot. Ron Unz himself could be counted in this category. To me, part of the reason he was pushing his "The American's spread it" theory on the Kung Flu is his pure anti-all-things-Americanism. (The others are that, well, he thought of it, and dammit, he ain't changing his mind now, along with "China number 1!".

Some of the stuff by the myriad anti-all-things-American writers just pisses me off, but I don't have to read, and one can't say Ron Unz doesn't let all kinds have their say on his site! There is that new blogger, Raches, who is not only an extremely pompous full-of-himself writer, but I checked out one of his latest ... whewww boy! That's about it. I REALLY, REALLY think Ron Unz could have found a better blogger to fill the place left by old Audacious Epigone (a very steady, balanced fellow).

I'll check out that Kunstler thread in a bit.
Moderator
PS: Mr. Hail, you're welcome. I think we may have written about this before, but my recollection is that John Derbyshire was very mildly anti-panic from the beginning. He is pretty familiar with China, not just from having lived there, but from his wife's connections, and, in fact, they both went there in '19, as he reported on in only a few articles/columns soon after (Sept. of that year, I think - lucky for them he made the trip at that time).

Further on down the road, say well into summer of '20, Mr. D could be seen as anti-panic, though it was hardly ever the main point of his writing - going back recollection, and I guess you can search this very easily - much of his stuff from VDare does get onto unz.com, but not all of it. (For example, some segments of the "Radio Derb" transcripts will, but others won't.

BTW, I've written under his great monthly "Diary" posts (on unz, that is - no commenting on VDare) in comments about 3 times that I wish Ron Unz would let him break up his segments on there into multiple unz posts. Ron Unz must not have read those, as he would normally reply to "housekeeping" questions like that. I guess that could go in the next "Bugs & Suggestions" thread.

Moderator
PS: mr. Costco, thanks for the comment. I don't think it is all necessarily planned, but your cast of characters sounds about right.

Mr. Anon, I'm glad Mr. Hail chimed in on that, as I didn't know why Mr. Hopkins was not being published there anymore. Mr. Hail's explanation makes a lot of sense. I was about to write that C.J. Hopkins' unz material was available, but not so accessible, but I see he is one of the archived writers linked to on the front page (not the way I got to the "Teasers" page for my link).
Hail
PS

Note: The below on C J Hopkins' separation from republishing at the Unz Review is, afaik, speculative, but had seen it somewhere.
Hail
PS

Mr. Anon wrote: "(C.J. Hopkins' columns were discontinued by unz in April of '21, but Ron Unz is very good about keeping the material available.)

I did not know that. Was there some particular reason for that?"

Word is that Hopkins, who is a foreigner living in Germany, was worried about possible problems (deportation?) if they found out his indirect connection to Unz,

Given that since Sept 2019 or so, Unz has published Holocaust Revisionism material, much of which is (of course) illegal in Germany. Men have gone to prison for it. Hopkins need not make the offense himself to get on the wrong side of the law and have problems such as getting his visa revoked, or softer forms of punishment like closed-off options in his other endeavors.
Hail
PS

BTW, does anyone know what happened to the angrily anti-US writer who lives in Florida named THE SAKER?

Some commenters at the Kunstler blog were discussing Unz, Anatoly Karlin, and The Saker, and the failure of all the above and more to understand the Corona-Panic, and even cheerleading for it.

But The Saker takes the cake.

It seems Mr Saker has descended into a bizarre form of Corona-paranoia. He regularly goes on tirades against the evil Covid Deniers, deletes any comments on his blog (which gets lots of comments) which have even hints of Anti-Panic positions, and life-bans commenters on second offenses for Covid Denial or (in his words) "mention[ing], even indirectly, the medical aspects of SARS-COV-2/COVID19 including, but not limited to: origin, prevention, effects on health, treatments and putative 'non-existence' (including the 'its just like the flu' kind)."

The Saker has for years been published at Unz, and, as far as I know, still is --- but afaik his Unz writings are entirely with anti-USA foreign policy focus and this Pro-Panic crusading spirit I was not aware of.

I stopped commenting at the Unz Review because I began to be annoyed by the Pro-Panic side's obstinacy.

(Putting myself in the other side's shoes, they probably felt the same about the Flu Apocalypse Deniers. The difference is, they were wrong, basically, from the start and we can prove it. See one of my graphs republished last year at Swiss Policy Research: https://swprs.org/wp-content/uploads/2020/07/sweden-projection-reality-june-28.png --- But no one cares.)

I came to see it as a time-waster and much of the time it felt only a few steps away from dealing with anti-data flat-earthers, which given the quality of the Sailer commentariat was baffling and demanded an explanation. The Corona-Panic was a complex phenomenon and the full story on it is yet to be told. A lot of smart people got it very badly wrong or failed totally in 2020.

There was, starting some time about February 2020, through Peak Panic in spring 2020, well through the end of 2020, and into 2021, a Pro-Panic editorial line at UNZ which was also frustrating. I don't know that any of the featured writers exept Hopkins and Whitney and Ron Paul were Anti-Panic. Derbyshire gets most of his excellent writing's views there and VDARE now, I suppose, and he has been noticeably neutral almost all along. Steve Sailer, whom I had followed for years, was at the very head of the mob shouting "We want Barabbas!"

I said to myself, "It is no longer useful or interesting to actively participate here." I would go back, I told myself, whenever the Corona-Panic ended, but here we are now in Q4 2021 and it seems as strong as ever...

I may have a project in the pipeline analyzing Steve Sailer's emergence on the early cusp of the formation of the Corona Pro-Panic coalition as early as January 2020, and his shifting position and emphasis in the 21 months since.
Mr. Anon
PS

"*** C.J. Hopkins' columns were discontinued by unz in April of '21, but Ron Unz is very good about keeping the material available."

I did not know that. Was there some particular reason for that? I like Hopkin's articles. He is still featured over at the Off Guardian site.
Welcome to Costco I Love You
PS Ready for the long Dark Winter psyop?
Buckle up as the transhumanist Satanic globalists go for the whole depopulation enchilada and traitorgov is onboard.
The hive borg woke Red Guards were raised to burn this world to the ground and get the rivers of gore flowing.
The plandemic Covidiocracy is just the means necessary to burn it all down better.