Stupidity acceleration and some jerk 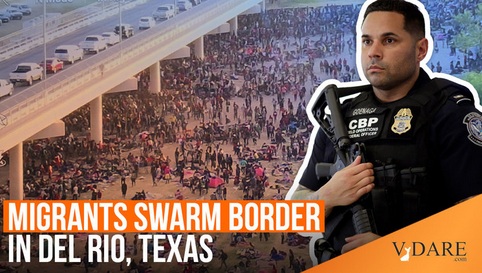 I'm sure you've all heard the story of the mass Camp of the Saints-style invasion down there in Del Rio, Texas. VDare does the best job I know of in documenting the stupidity of America's legal and illegal immigration, and John Derbyshire always writes in a very organized and interesting fashion.

His latest column is The Del Rio TX Disaster—"Like Watching A Nation Busily Engaged In Heaping Up Its Own Funeral Pyre”. (It's on The Unz Review with over 100 comments already here.)

The ruination of this country is not something about which one can just take in one story a week or so, nothing existential, write an occasional letter to one's congressman, and note that it's something that we ought to do something "in the future" anymore. The hits are coming steadily with almost no serious pushback and no trends in any positive direction*. I had thought 5 years ago, that Donald Trump could at least get the country to stop digging in all the holes we have gotten into. As disappointed as I was after a few years, ruination was held to a steady pace we could keep up with.

Now, I would say that our ruination is accelerating. There is jerk involved too. I didn't make a typo there. "Jerk" is a physics/engineering term for a change in acceleration. It is the 3rd derivative of a position vector. The first derivative with respect to time is velocity and the 2nd is acceleration, so jerk is the change in the acceleration with respect to time. In America today, we have had a positive jerk, coinciding pretty much with the (s)election result of 2020 and the jerk that got (s)elected.

They are making it harder and harder for us to get out of this peacefully or with an intact country.


PS: I have a number of other ideas for posts in mind rather than write about something for which I point out an article with more details and better writing to begin with (compared to John Derbyshire, at the very least). I feel obligated to cover at least some timely news, even though relaying the news is not our purpose at Peak Stupidity. For example, I do want to write about that story about 4-Woke-Star General MIlley traitorously dealing directly with Chinese, as a commenter going by "What Interesting Times" suggested.. In this case, Immigration Stupidity is our biggest (general) topic key anyway, so this was warranted.


* Getting out of Afghanistan, no matter how stupidly it was accomplished, is one.

A short sharp look at the German election. Candidate Annalena Baerbock of the Green Party: Each German consumes 9 gigatons of CO-2/ per year (9 tons would be the better guess).Sea-level will rise seven meters in this century (a meter in the darkest predictions). This will cause lots of emergencies together with a heat crisis in the global south, but: "We have always room for more immigrants!"

So - she concluded today in an interview with the German daily Die weLT: "I want to solve all the crises in the world."

Is she the stupidest politician in Germany? - No, not at all...Plus: She is very well spoken - and she is good looking too and knows not only how to dress, but also how to behave in public - and has two nice and well behaved kids! - Voters love her. She will help to double the Green Party vote count to about 18%.

https://www.welt.de/politik/deutschland/video233886236/Kanzlerkandidatin-der-Gruenen-Annalena-Baerbock-im-Exklusiv-Interview-mit-Jan-Philipp-Burgard.html
Moderator
PS: Mr. Hail's comment - it may be missing a few lines:

Although he still writes traditional columns sometimes, I think he is mainly doing these 35-to-40 minute "Radio Derb" audio podcasts, based on scripts he writes for that medium, and that this Haitian illegal immigrants article is one of those.

It's an interesting approach to the medium of writing.

Throughout the week John Derb spends some time brainstorming/notetaking, drafting, then on recording day reads it for audio (podcast) form. Only days later does publish slightly edited segments of the audio in written form. In the audio version, he can include audio from other sources to make the points necessary.

This complicated process is assisted at every step of the way by VDare, his main publisher. A form of neo-publishing, uniting some of the traditional and some of the Internet Age.
****************************
MBlanc46
PS As I’ve said elsewhere, this is revenge for 2016. And insurance that 2016 will never happen again. Sure, they were always going to flood the country with Third Worlders. The employer class want the never-ending supply of cheap labor, and the Left want the votes. But the thumb-in-the-eye character of the current invasion is meant to send us a message. As far as an intact nation to resurrect goes, that was lost by the 1990s, if not earlier. The question now is, Will we be able to fall back to defensible positions where we can preserve some semblance of Western civilization? At present, the outlook isn’t brilliant. I won’t be around for the outcome. It’s up to you younger guys to make that happen, if it can be made to happen.
Moderator
PS: So sorry, Mr. Hail! I deleted your comment from this thread instead of the one under the last post. I will try to back it off, but it nothing else, I'll get your other one (I know you wrote them a little bit differently.)

I have to go now and shouldn't have done this in a hurry.
Moderator
PS: Mr. Hail. It's one thing to have actual video, with the two guys conversing/arguing in front of you. That does beat reading lots of times. However, it it's between a podcast of the interview and a transcript, I'll go for the transcript every time. That's just me, though.
Hail
PS

On pure text vs. audio vs. video as the original input for "content":

Did you happen to listen to or see the recent (2021, I think) interview Steve Sailer gave to right-wing sociologist Edward Dutton?

Some were saying the interview did not go well, that Sailer is much better with the written word, that the interview went nowhere, that it was a waste of time.

What would the two have come up with, in the same space of time, via the written word?
Moderator
PS: Mr. Hail, I did notice that Mr. Derbyshire's podcasts get turned into VDare (often unz.com too) articles or short posts piecemeal - I'm not sure every single segment does.. That makes sense, as the podcasts cover those multiple subjects, something related very nicely, and sometimes not. I also like how VDare does this.

I don't ever listen to the podcasts though. I wait for the transcripts, which come out about a week or so later. I have not gotten used to the speeded-up thing, so for me it's 45 to 50 minutes for something I can read in 5-8 minutes. Not too much is so timely that I can't wait a week.

Here's something related. John Derbyshire also has his "Monthly Diaries" which are even better. I don't know why, but they are always published on unz as one full piece. Since they also have many segments, the comment threads can consist of commenters writing right past each other, because they are discussing different segments. I've written comments 3 times to ask why they can't be separated. Mr. Derbyshire doesn't write back much, but I'd think Ron Unz would have, if here were reading comments.

Lastly, PS would be a little less anonymous if it were a podcast, just based on someone recognizing the voice. Also, I am a really really late "TECH" "adopter". I write like I talk a lot, so that'd probably be a plus.