Her name was Caroline Schollaert.* 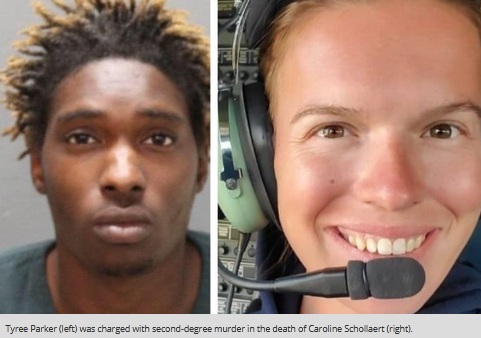 On VDare, a guy named Kenn Gividen** writes monthly posts with anecdotes of black on white murder. He'll have 20 or so each month. Those 2 to 3 hundred a year are perhaps 1/2 of the total, from what I could gather just now (help, Steve Sailer!), so this happens at least once daily. Mr. Kenn's point with these is to give more information than one can get from just statistics. (Here"s something similar from American Renaissance.) One can see the senselessness of most of these murders, along with sometimes a few clues on how not to get into a situation that would result in one's appearance in this column.

From the latest edition, August 2021—Another Month In The Death Of White America, I saw one story (near the middle) that struck me, just because the 26 year old Caroline Schollaert really had her act together more than most. She was in a Coast Guard unit out of Cecil Field, Jacksonville, that operated Agusta Dolphin helicopters doing drug interdiction.

Now, I'm not that gung-ho on the drug interdiction business, (the unit is the HITRON - Helicopter Interdiction Tactical Squadron - yeah, they had to fudge with the acronym a bit), though, they could, of course, interdict illegal aliens as well as drugs. (I don't know if they do.) However, when it comes to military branches of the US, I think the Coast Guard has operated more in keeping with the US Constitution than the rest of the branches.*** The rescue work has got to be satisfying, and I don't know who would object to that mission. I haven't found out if Miss Shollaert flew helicopters or had another role on them, but it was a useful life.

Here is the Popular Military article, linked-to by Mr. Gividen, which gives more of the story. What I was also struck by is what went on in this particular incident, making it different from most that are described in those posts. The 22 y/o black thug was breaking into her car, and this young lady did more than just call the cops. She went down there and held the guy at gunpoint. Unfortunately, she must not have stayed completely aware of this thug's movements, as he shot and killed her with one round.

What a waste! Which life up top is worth more? OK, which WAS worth more?

* The way I put this is per the style of the Paul Kersey's blog. He has written about race (especially one in particular) since his good friend, a young lady, was murdered in Atlanta, Georgia a decade or so ago.

*** That'd be at least as far as egregious violations. Maybe it should be a State function, but that would complicate things.

Moderator
PS: Late reply, Adam, but maybe that explains why Mr. Unz LUVS this Raches guy so much. It's his baby?

The comments from him are usually insufferably pompous, but I've see a few that I could stand lately.
Adam Smith
PS: Good afternoon everyone...

Mr. Hail, “That and word is Kersey censors comments more heavily than the norm.”

It seems that way to me. Whoever moderates Kersey's comments has censored more of my comments than any other UNZ moderator.

“Does Ron Unz still pepper his comments with "sorry, I was busy with this one big software project, but..."

Maybe the Unz Mystery Software Project was a bot for robo-journalism and he occasionally slips in such stories in the Kersey column? Who would know?”

I think Ron's big mystery software project is a gpt-3 writing bot that comments under the handle Raches.

☮
MBlanc46
PS Many of them hate us. A few of them physically attack us. A few of those attacks are fatal. If we dare point out that this is happening, all of the institutions of society come down on us hard for RACISM! Observing my normie neighbors, I have to conclude that we’ll never have the wherewithal to fight this. We’ll become a smaller and smaller minority until we simply disappear.
Hail
PS

"I didn't know about the sports recap bots. Interesting."

They did this for financial stories first, and it got some fanfare at the time, about the late 2000s.

I haven't heard much about it in years, but I assume it has to be more widespread and much better in the early 2020s than whatever the 2000s could come up with.

Does Ron Unz still pepper his comments with "sorry, I was busy with this one big software project, but..."

Maybe the Unz Mystery Software Project was a bot for robo-journalism and he occasionally slips in such stories in the Kersey column? Who would know?
Moderator
PS: Thanks for the comment, ESP. That story may have been one I'd read already on Mr. Kenn's pages or Mr. Kersey's blog.

Mr. Hail, yes, for a while I saw no sense in reading the same-old depressing stories. His formulaic ones were 1) a black on white murder, 2) some black organization or the city organizing some kind of "don't shoot each other" campaign, 3) a shooting at a funeral for some black guy that got shot, 4) #2 except someone gets shot at that event, and 5) blacks replacing white people on TV and in other media. I'm probably forgetting a few repeating themes, but then, I think he's branched out since a few years back.

As for the comments, I agree. I had one "whimmed" with no earthly idea why. Then, when he had a post about black characters in comic books, I wrote and told him if he read these things, "please stop". He was OK with that one.

"The way I put this is per the style of the Paul Kersey's blog."

The problem I always had with him is his content was so predictable and formulaic as to be indistinguishable from a machine-written text, almost like those automatic sports-recap bots they have used for a while now to write such articles.

That and word is he censors comments more heavily than the norm.
The Egalitarian Sewer Pipe
PS Read last week about a 70 year old woman in Chicago getting ready for work to open up at 4AM sitting in her car when she was gunned down in a thrill kill by two youths.
It was only on local Chicago news and regional AM radio as it doesn't fit the narrative.

Crime
Stats
Matter
Moderator
PS: I'm guessing she wasn't threatening enough. If you were really ready to shoot this guy and told him to lie face down on the ground, he probably wouldn't be able to do something like that. I have not been in this situation to see, though.
The Alarmist
PS

If you must take them alive, at least shoot them in the kneecap to keep them under control.