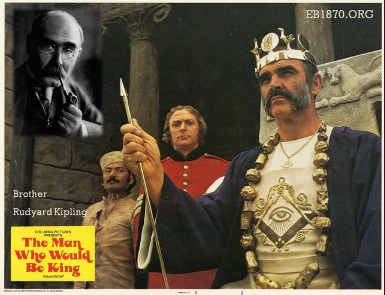 Peak Stupidity does not concern itself or post much on the big Conspiracy Theories of various sorts. These range from those about the many psychopathic elites in the US Government of today, to the American Deep State of the 20th century, and then way back to the bigger, long-term theories* about the Rothschilds, the Illuminati, and the Freemasons.

It's not like we categorically deny any of these theories. There may be something real behind lots of them. However, we'd like to concentrate on the stupidity of the here and now. The stupidity of, or often, induced in, the masses of the modern population is the real problem. Evil men and (Hilda) Beasts** behind the scenes can only do so much, without a lot of stupidity in the general population.

The picture above shows a Freemason logo, if you will, on the chest of Sean Connery from the movie The Man Who Would Be King. This post is not a movie review. However, let me just say that this is a very good one that I don't know how I'd not seen before. I thank Steve Sailer and his commenters for having turned me on to it It's great to watch, not only for the good story, with a lesson to be learned***, and the lack of PC back in 1975, but also for the self-esteem of the West, not seen much in recent years.

If won't really spoil the movie here to bring up that the Freemason symbol that movie-Rudyard Kipling**** gave David Dravot (Sean Connery) saved his life and plans once. So, the reach of these Masons is shown to be powerful. Is it like a global Fraternity?

Of all the secret societies of the elites and Globalists (often one and the same) I've read about here and there, the Masons or Freemasons, is the one bandied about the most, it seems. I am not sure what the big deal is.

I respect skilled manual labor. Masonry is an occupation with an art to it. It's not one of the building skills I've every gotten into even in the least, but I see that there's quite a bit to it, doing it right, that is. I'm sure there are important methods and tricks of the trade that take years to perfect, but why not hand those down in The Bible of Brick-Laying or a (modern-day, as one can tell by the name) Masonry for Dummies? We have building codes too now.

An apprenticeship type arrangement for teaching young men to do this type of work right would be a good thing. I just don't see the need to meet in dark rooms in Masonic Temples, wearing robes, and hazing newcomers like it's Mu Alpha Upsilon (Masons Are Us?) How did they get from brick, block, and tile laying to that stuff?

Plumbing has not been a part of the world quite as long as masonry, but it's been a couple of millennium. Plumbers don't have secret societies, do they? (There was that group that worked for Richard Nixon 50 years ago or so ...) Other than showing those ass cracks while working under kitchen sinks, switching out the hot and cold into the mixer, and occasionally running tub overflow valves to nowhere, they don't seem like an evil bunch. Perhaps their big conspiracy is the Hex of Pex. (I'm sorry, I don't trust that stuff yet. I'll wait a few years and stick with PVC in the meantime.) Plumbers do build temples with thrones even, but we simply call them the master baths.

Electricians have only had their trade for a century or so. Since they've gone to Romex, case grounds, and breaker boxes, I see no evil or big conspiracies out of the Frelectrians.

There's only one piece of evidence that's I've had to deal with that may cause me to thing that the Masons in particular are up to evil. That'd be the residential siding known as Masonite.

This stuff is crap. It's some sort of pressed or glued together paper. After a few years of normal weather, at least in moist climates, this stuff warps up and then falls apart. Are the Masons responsible for Masonite? If so, yeah, they might be evil.

OK, that was just in fun, OK, and a little bitterness for having had to replace that crap with Hardieplank (great stuff, so far!). Tomorrow we will get serious about the biggest possible conspiracy of them all, at least from recent times.

** We are SO GLAD that this topic key has become almost obsolete!

*** To me the lesson is very simple, and I, or perhaps Steve Miller, could have told Sean Connery pretty early on what it is: Take the money and run!. Whooo-hooo-hooo, oh yeah ...

**** who also wrote the book the movie story was taken from.

"The Man Who Would Be King" is indeed a great movie. I saw it when I was a kid. I have a DVD copy I bought a few years ago, but haven't watched yet.

Michael Caine was in a lot of good movies. Just last night I watched "The Italian Job" from 1969, a heist film full of lots of 60's Mod-British grooviness and classic cars. Connery also did a heist movie not long after that: "The Anderson Tapes". I highly recommend both.
Peter Franks
PS Conspiracies are only possible on a dumbed (stupided?)down population of sheep bleating out save me mommygov, keep me safe.
Be careful who you put in charge of saving the lifeboat because they might be wolves disguised as sheep.
Accidental or coincidence history? Not very likely and even comrade kommissar FDR(CPUSA) said you can bet that anything happening in politics was planned out to happen that way.

Sean Connery is probably one of the most un-PC actors ever and I'm surprised 007 is still after that laugh out loud Spectre with the .380 that shoots down helicopters from way beyond pistol range.
Maybe a rainbow James Bond as a tranny or cross dresser is in the future as part of the great improvementation.
Moderator
PS: I really enjoyed that one, Adam. When we get to a place with more room, I'll enjoy working with my hands again.- not anything near as creative as what that guy accomplished, but one can dream...

Robert, I'm in the middle of writing, explaining why I just don't know for sure. I'm spending too much time on a digression on aviation.

Mr. Hail, once in a while, Steve can still see the light, in the strangest of places, when he looks at it right ... [/Grateful Dead reference]
Hail
PS

I see Steve Sailer just yesterday came out as critical of the Biden vaccine mandate,

but then squabbled with commenters and insinuated that they peddle in conspiracy theories, including of the lower-case kind (lots more false positives than reported), and the upper-case Conspiracy Theory kind (sinister NWO plan for population control).
Adam Smith
PS: Good afternoon everyone...

“Masonry is an occupation with an art to it...”

I don't remember if I posted this before, (sorry if it's a duplicate) but I know how much Achmed likes to watch someone work with their hands. And it fits with today's masonry theme...

☮
Robert
PS: Tomorrow, conspiracy theory, modern times --- What could it be?

David Icke, JFK, and Lizard People is my guess.