Modern Russia under Putin: An alternative to Globalism? 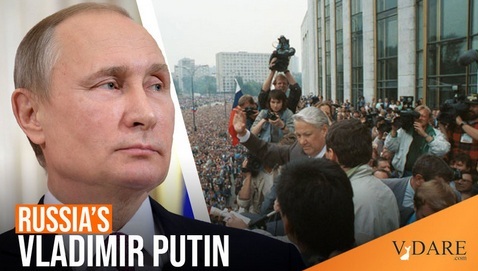 Peak Stupidity promised many moons ago to write something (a post or two) about the recent history of Russia. By "recent history", I mean, a time when I was around and aware of world politics. After the end of the Cold War, I, and, I'm guessing, most Americans, paid no more attention to the Russians, especially during that awful*1990s period of uncertainty, despair, and mass-scale financial looting by the American Globalists.

It was like this, to me: Hey, we finally ended the Cold War and the massive threat** of Communism. We had had to put up with that threat from those bastards for over 40 years. Fuck those people. I realized during the Cold War period that, no, not all the Russians themselves were Communists. They just lived with it. The Russians put up with that Communist government, though, and they should have done something themselves about it. In the end, I didn't care what happened to them.

Russia under the rule of Vladimir Putin may not now have the prestige, or even the (purported) economic status, it had during its Soviet Union Empire era. How important is that to the Russian people though? They have seen lots of improvement since the 1990s. They've done much better than America since WE won the Cold War in a major respect. They and President Putin have not let their nation be ruined by the Globalists as the Americans have and as their Government has been an active part of!

Last week VDare published an article by writer Wayne Allensworth (he appears only very occasionally there) titled 30 Years After Communism Fell, Putin Offers Alternative To Globalism. That's Why Our Ruling Class Hates Him.

Per this well-written and interesting article, Mr. Allensworth was there, during the bleak period of the 1990s. That is what he writes about in the first section

(I'm pretty sure this is not what you meant by “tank watch”.)

Though I don't know any Russian ladies in real life, they do seem nice...

Robert, “Perhaps we need a new Gummint to NOT pay off this debt. G. D. Pee off.” Lol... Last year the global debt total hit to an all-time high of $281 Trillion, or more than 355% of global GDP (according to the Institute of International Finance). Global “government” debt accounts for about 90(ish) Trillion. (Or about 105% of global gross domestic product in 2020.) Kinda makes one wonder to whom all this debt is owed. Also, I've heard that the debts that cannot be paid will not be paid. Gee Dee Piss off indeed.

Mr. Moderator, Digital Anything ≠ Real Money. Though I suppose it may one day in our increasingly clownish world. I think a serious country would not let foreigners buy houses or any other sorts of real assets. While important, manufacturing is not the only form of economic production that can be used to create wealth.

Absent some serious policy changes, you're probably right about China's ability to buy up whatever they want.

A National Jubilee would be interesting.
I hope everyone has a great evening.

☮
A Shepherd Boy From the Urals
PS Rasputin did what Emmanuel Trumpstein (WWE/WWF) claimed to be doing and that is why the internationalists hate him with such a fury and want back in.
He also doesn't do rainbow rump ranger globohomo and keeps limits on immigration with statements such as if you come here as a foreigner you will learn the language and get a job.
Putin (KGB) also knows that WAR is the only thing to keep the Rome/London/DC Axis from attacking which is why the Russian Bear is awake and ready for anything the globalist open square world bazaar shopping mall collective can throw at them.
He is a nationalist and that is something that the internationalist just can't have in "their" world.
Moderator
PS: Great stories from your experiences, Alarmist. Thank you.

Mr. Smith, I would say the Chinese have just not cashed in their dollars yet. They can continue buying up housing, Big Biz, etc. until the dollar goes down the toilet. The Globalists may still officially own a lot till then, but without much manufacturing to create wealth, won't the Chinese have the ability to buy up whatever they want with whatever is real money after that?(The digital Yuan?)

I think the book I reviewed with 6 posts in Jan '20, "The Mandibles", does a good job in illustrating how it could go down. I can't remember if the Chinese were heavily involved in that story, though.

Robert, it was the Chicago School vs. the Harvard School, huh? I don't know these details, even though I did make an effort to read the Wall Street Journal daily front-to back for a year and a half, during the very late 1990s.

A National Jubilee would be interesting. No matter how you do it, I think it would result in the end of the dollar. I wish there was just one big bank note to the Chinese we could blow off as in "hey, you'd be speaking Japanese right now, were it not for the American Army, Navy, and Marines, so let's just call it even. Yeah, I know ... Listen, you fucked up. You trusted us!" It's not exactly like that though.
The Alarmist
PS

Wine is fine, and beer is dear, but liquor is quicker.
Robert
PS: Mr. Smith,

U.S “government” debt currently stands at 125.50690% of GDPee. I think you and I agree that this is problematic.

This is rather ironic. One version of the story of muh constitusion has it that the Feral Gummint was founded to pay off the war debt which the states had taken on. Perhaps we need a new Gummint to NOT pay off this debt. G. D. Pee off. A new Jubilee year is declared.
Robert
PS: Mr. Moderator,

After the end of the Cold War, I, and, I'm guessing, most Americans, paid no more attention to the Russians, especially during that awful 1990s period of uncertainty, despair, and mass-scale financial looting by the American Globalists.

I didn't pay very much attention, but I did follow the looting a little bit. The 'Chicago School' got locked out by the 'harvard school' to guide the process. According to the 'Final Call' (the Nation of Islams paper) this meant that one group of jews would get the money, instead of the other. This seems to have been the case.

Mr. Alarmist, I'll bet you are quite good at entertaining people after a beer or three.
Adam Smith
PS: Good evening Mr. Moderator...

U.S “government” debt currently stands at 125.50690% of GDPee. I think you and I agree that this is problematic.

A one percent rise in the interest rate would increase FY 2021 interest spending by roughly $225 billion at today’s debt levels. With the exceptionally low interest rates, the feral “government” is projected to spend over $300 billion on interest payments in this year.

From the mid-80s to recent years, various Russians have crossed my path.

The earliest was on my way back from West Berlin, at the Soviet checkpoint at Marienborn (counter to ours at Point Alpha), where the Soviet officer checking my orders had a Tank watch that I admired who said he’d take my gold Casio in trade. I assured him it was not real gold, and in fact I got it for only $30 at the BX. The Casio unquestionably kept better time (at least until the battery ran out), but I got a great conversation piece and a story to tell the kids about coming face to face with the Red Menace and rather enjoying it. I didn’t think at the time of the courts martial we might face for that, suggesting our bigger worries might have been our own respective sides.

The Russian bankers I knew in the ‘90s and ‘00s were all pleasant sorts, but somewhat uninteresting. They could, however, really drink.

I later had a Russian GF who was a smoking hot Siberian Tiger. She was great fun, except perhaps for that time she threw a glass at the German bartender who dared to pour Smirnoff when she ordered vodka. I watched her crush a roach with her bare hand on a table at a bar, and I thought, “There’s something your average American gal would never do.” She once told me I had a Russian soul, which I’m sure got back to someone in the district tasked to keep tabs on “alumni” living abroad. She and her friends were largely doing drudge work in the west for shit wages, but they didn’t hesitate to buy the drinks more often than not. We are still friends a decade later, much to Mrs. Alarmist’s bemusement.

It’s funny to have crossed paths with the enforcers of USSR communism, the plunderers of post-communist Russia, and the victims of that plundering who recount their parents’ stories of the old days. A couple years back, a Russian girl I work with who is in her mid twenties once gave me the best summary of the good aspects of the USSR, something she had not personally experienced, as she bitched about the shit she had to take from a Khazak colleague, also in his twenties, who had absolutely nothing nice to say about Russians. Can you imagine being the American unwittingly drawn into the middle of that?