An electrical hot plate that prefers to be on: 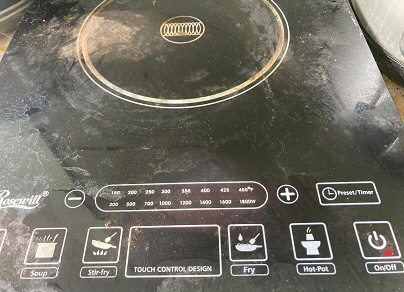 Membrane switches are big now, at least up to the point of their being glass touch screens. It makes sense for the hot plate shown above. Pushbutton, toggle, or any other type of mechanical switches are a place for dirt, in this case, hot soup or food particles of any sort to infiltrate down into the device. It would then be hard to clean and these switches may even jam up. This thing has one flat seamless surface at the top, so it can be wiped off clean.

However, I think the surface of this thing has something approaching a touch screen, at least for the areas with the switches, as I feel no movement at all, and they switch seemingly based on any light touch.* That's the problem. While moving the thing a few inches, it turned on, ready to cook. It was about to get hot. Turning it off at that surface was harder than turning it on. It took a certain touch, or that red LED you can see in the picture would end up back on again.

Besides my being pissed about even having to screw around to turn this thing off, I realized that this is a real safety hazard. This thing is outside - whether that's better or not, even the cat could accidentally turn this burner on. Any fire started would have less to go on outside, but the thing is made for the kitchen. Are the marketers who specified this interface and the engineers who designed it plain stupid? When you turn an electric burner off, you want it to really be OFF. You don't want it to come on again by accident.

Listen, you young marketing geniuses and (maybe) engineers: It's not like we are mice and can only push with a few milliNewtons. We have muscles. We can flip a switch. You absolutely NEED a real solid ON/OFF switch on something that gets red hot when on!

There's no switch built into the cord, which would be a simple solution. So, of course, we need to plug/unplug this device, but it's a hassle - I'm hoping my wife doesn't forget with this piece of shit.

That's the dangerous one, but I have a noise-reduction headset (Lightspeed brand) with a different on/off problem - it's not a danger, just a possible waste of batteries and another example of this stupidity.

I really like this headset, and I got it in great condition used. There are slider switches for volume and a few other options, along with a momentary-push on/off button that takes a pretty light touch and not much movement either. One has to hold that button for 3 seconds to turn off the noise reduction. You press that button till you hear much more outside noise**, the green LED goes dark, and you know it's off.

That's fine - it's off. Well, that is, until you put it away and it bumps into any little thing in the case. Then it turns on again, because "on" requires just a momentary push. Now, according to the Lightspeed website, there IS an auto shutoff feature for when the headset is "not in use". I don't know how that works, but I'll take their word. However, it's irksome to see that the thing has turned back on in the case due to the action of, and programming behind, that switch.

This reminds me of the delayed shutoff action of dome lights in modern cars. Are you like me, doing one of these 2 options:

a) Staying on the porch once you get home at night to make sure the lights go out after a while, so you'll not have a dead battery in the morning. (It could have been on "on", not "door" somehow, if you think, well, worry about that.)

b) Not use the dome lights, leaving them in the "off" position, to avoid this "feature".

It's been many years of progress, but even the non-AI smart devices are getting out of our control. How do we get control of them? We can just go to the source of their power (over us). I like to pull plugs on TVs, now this burner, and computers, to let them know who the hell is boss here.

Speaking of the latter, I do understand why the hardware/software developers would like an organized shutdown of a computer. There are many pieces of memory to keep, to save the state of programs and the data. They would like me to wait until it all gets done, and in due time, owner, "I will turn myself off. Please don't mess with me in the meantime."

"Sorry, computer, I've seen you get locked up before. I'm tired of your bullshit. There goes your A/C power supply. Here goes your battery. Now, tell me who's boss?!"

* It possibly uses laser or light sensors from below, through the glass. (?)

** The active noise reduction is an amazing invention, IMO.

Moderator
PS: The Doobie Brothers are getting old with us - perhaps they can come out with an album named "What were once bugs are now features."

Even worse, why is SO DAMN HARD to know if your headlights are turned on or not?

The current car has a little headlight picture on the dashboard that lights up to tell you when the headlight is on. Problem is, it lights up when the running lights are on.
PeterIke
PS
OHMYGOD the dome light "feature"!! Horrible.

Even worse, why is SO DAMN HARD to know if your headlights are turned on or not? Especially when you're in a rental car you're not used to. The switch iconography is always totally obscure. I guess because putting English words "ON" and "OFF" would be racist, we have to have pictures.

And then the freaking lights STAY ON when you shut off the car, and you have to wait and wait to make sure they actually turn off. It's maddening.
Moderator
PS: Mr. Blanc, hey, I get this guy!

Or, this guy gets me.
MBlanc46
PS Rosenberg’s Rule: Everything always gets worse.