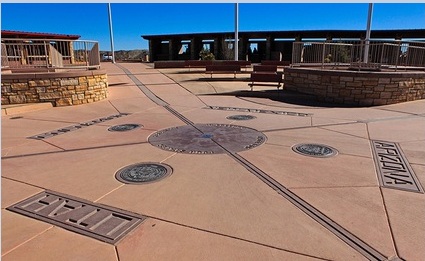 Within 100 yards of the Four Corners quadripoint are rows of sales booths, one row in each State, set at 45 degree angles to the lat/long lines. Due to the Flu Manchu (but, of course), these outdoor booths (just concrete walls and a roof but open in the front and back with lots of air flow) were 2/3 empty by my estimate. They are manned, OK, "squawed", for the most part, by Navajo Indians. As I wrote in the previous post, all this is within the Navajo lands, and good on 'em - hey, at least there was no Pride flag, just the 4 State flags and 4 others (wish I could tell you).

Here we were though, with me a Geography lover, and I knew neither the latitude of the Utah/Arizona (western portion) and Colorado/New Mexico (eastern portion) nor the longitude of the Utah/Colorado (northern portion) and Arizona/New Mexico (southern portion). These lines were right there on the ground, in nice polished granite.* Since my boy asked about this, I needed to tell him. Well, one usually goes to the phones now for anything like this. Nope, no service. Haha. Whatdya' want, out in the corner of four Western States in the desert, endless wifi? I am just fine with having no cell service around - it lets people spend more time interacting with one another, which they were. However, a small sample of them didn't know our latitude or longitude.

Here's where I feel good about my Geography foo. I guessed 38° North for latitude, and just knowing the "dry line" is 100° West going through the middle of Texas (with each degree being ~ 50 statute miles at that latitude), I guessed 110° West. How were we going to find out?

Why not ask an Indian who works at one of the booths selling hand-made jewelry and stuff? They are there all day long most days, you gotta figure. This is a tourist attraction, so yeah.... 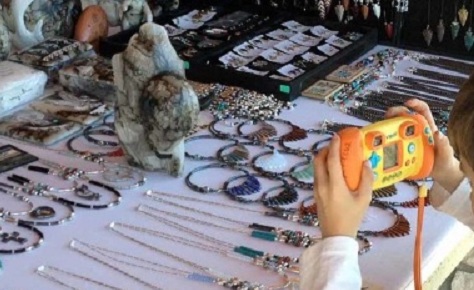 (To be nice to the Indians, I asked my wife if she wanted me to buy her any of this stuff, but she declined on a $25 necklace.)

I went to New Mexico to do this, as that got me to the closest squawed booth. This Indian had no damn idea where we were! OK, I don't expect the average White band guy, much less girl, to know his, much less her, home's geographical coordinates. People don't care, unless they are surveyors or amateur astronomers. However, this WHOLE operation is based on the idea of geographical boundaries on latitude and longitude lines! How could you work there and not by some point know these measly two numbers?

It turned out that there is a plaque that we hadn't seen with this information. It was way over in Arizona or Utah, can't remember. (Now, I don't know why the lady couldn't have at least pointed me toward that plaque - what is that, all White man stuff?)

It is interesting to note that, upon completion of his Arizona-New Mexico boundary survey, Chandler Robbins went to the effort to write a letter to the editor of The Santa Fe New Mexican (still today’s daily newspaper) explaining the very issue of the difference between longitude values referenced to the Greenwich Meridian and those referenced to the Washington Meridian. In this letter of November 1, 1875, Robbins included the following explanation:

I am kinda glad I didn't try to get that explanation off an Indian squaw. I trust the White Men at NOAA and the other White Men who wrote the text for that plaque, more than the Red Lady, no offense intended. The bead necklaces are pretty, if that helps..

* I wrote that they were marble yesterday and 6" wide, but they were probably just polished granite and the width was a foot at some distance and 6" closer to the quadrapoint.

** It's one of the VERY few US Government agencies I've got respect for. I'd even work for them.

Chiquitastan Got Good Banana
PS That is an interesting place in the egalitarian Chiquitastan or former USA.
Pappy bought all kinds of turquoise jewelry and I got a Clint Eastwood poncho as a youth while travelling through the glorious people's republic of New Mexico!
Fun trivia-Colorado borders seven states which is the most in the we are all equal and the same unity utopia Chiquitastan.
Was Dominion made in China? (snarkler)
Moderator
PS: Haha, Alarmist!

I gotta say that I even refrained from making remarks about how all the lady was doing is stringing a few Chinese-made beads together, that Buffalo nose bone likely having been injection molded in a factory in Shenzhen rather than having been found in the high plains... by some drifter.
The Alarmist
PS

Good on your wife for passing on that deal. The Dutch got Manhattan for only $24.