(This will be a series of, you guessed it, 4 posts, from our recent Peak Stupidity roadshow.)

We parked past (of course) and to well the left of that booth - in Arizona.

The term that I just learned for a point at which 4 distinct political regions join is quadripoint. Per wiki, who you hopefully can trust for at least geographical knowledge, there are many such points in/at 29 countries or intersections of countries (there is overlap in that 29). Many are intersections of municipality boundaries, which is no damn big deal. I also had no idea before about this: There is one quadripoint of nations at the intersection of borders of Botswana, Namibia, Zambia, and Zimbabwe. I would think tickets would be sold out years in advance*.

The United States has many non-natural borders in the western States, due to the way these territories (at the time) were created. It turned out that the borders of 4 States meet at the quadripoint known as the "Four Corners", and this one is possibly unique in that the borders go due (true) north/south and east/west. The states involved are, going CCW, Arizona to the SW, New Mexico to the SE, Colorado to the NE, and Utah to the NW. All that said, this point is within the Navajo Indian lands that are a large chunk of northeastern Arizona (but overlap a bit into N. Mexico, Utah, and Colorado).

On the recent road trip of ours, since none of us had ever been there, we made the Four Corners a short stopping point. I expected possibly a little less fanfare than what we came upon, but it was no big tourist attraction with stops by big-ass Chinese tourist-filled busses either.**

We came in from New Mexico, as the US-160 had the entrance to this spot on the west side of the road. However, we walked into the monument from our parking spot in Arizona, I'd say less than 100 ft west of New Mexico - this is clear from the 6" wide marble State border/ lat-long lines one sees once he get in past though a gap in the sales stalls. Therefore, this first post is labelled "Arizona".

10 bucks for an adult and free entry for kids under 6 is not too bad. I'm glad the Navajo can make some money from this, but that they don't scalp you with the fee either. (What? What'd I write?) However, the Kung Flu PanicFest Season 3, or maybe even one long season, is still in full swing there.*** The little booth for payment was so covered up with anti-COVID material that I don't think the Indian squaw inside could see anyone else in the car, much less one (yeah, that's the ticket) under-6 kid. Did I mention this is out in the desert in the bright sunshine? It was a nice cool 90 degrees F that day. There were signs all over about wearing face masks, outside, in the desert, in the sunshine (kinda redundant), there in Indian country.

I told my wife I "ain't agonna pay no toll wear no mask", well, unless were told it was that or get out. (Actually, my secret contingency plan was to get our money back and walk around point in all 4 States. Let's see, the edge of the monument area was 200 yards or so from the actual corner, so that's 2πr, so about 3/4 of a mile, quite doable.)


Standing on the Colorado/New Mexico border, awaiting a turn to stand at the intersection of 4 States and take pictures: 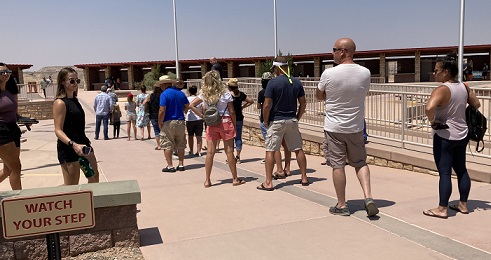 Not only did nobody bother us about the lack of face masks (though my wife complied), but with ours off, I noticed a few people that were wearing them in the parking lot yank them off. On that latitude line due east of the point, people maintained normal sane social distances of whatever it took to maintain nice conversations, without face diapers**** making it harder. People handed each other their phones for pictures back and forth, and I saw nobody using wipes with paranoia. It would have been embarrassing to do so. What a great crowd in a cool spot for those who like Geography!

* [Peak Stupidity and our agents provide only geographical learning services here. We cannot guarantee your safety if you plan to take a selfie lying down on top of these four African countries at one time - Disclaimer from Peak Stupidity International Legal Department.)

** That was kind of a nice change. All the people we saw seemed to be Americans, even the Indians.

*** Peak Stupidity already covered the worst of our experience with this in Showdown in Tuba City.

**** Maybe one in 10 people still wore them. Some wore that bandana style covering I think just for that western look - the wind was calm though.

Moderator
PS: They ought to at least have a buoy there in the Rhine for that point, Alarmist. A big buoy, maybe a moored barge (unless this is in the rapids), with perhaps a wine, beer, and Swiss Miss hot chocolate bar on it, respectively. (Sorry, Dieter, making fun of the actual GOOD chocolate - is Toblerone the good stuff, or is that what you would consider cheap crap?)
The Alarmist
PS

Botswana and Namibia were relatively sane when I visited them, but I never thought to go to the quadripoint with the other two countries. The best I can do aside from the safe four corners in the US was a boat trip on the Rhein that might have touched the tripoint of France, Germany and Switzerland at Basel.