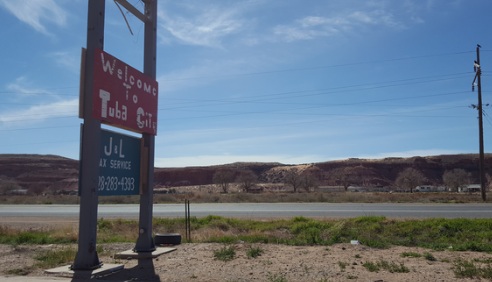 No, it's not Yuma, Arizona, a town you might know from a modern Western Movie*, way at the opposite corner of the State of Arizona. It's not even Yuba City, up in the Sacramento Valley, half way up the California-99 from Sacramento to Chico, on the way north to Weed. (I mean, where else would you be going?) We're talking Tuba City, with a "T", in the northeast of Arizona within Injun country, the Navajo lands, to be specific.

We needed gas, a few snacks, and a pit stop to pee on our recent road trip, and Tuba City, Arizona was the pit stop I selected. I'd been through there long before, on a long road trip, and I like to see if anything has changed. Many moons ago, back before the Tatanka, that is the COVID-19 virus, roamed the land of the Red Man, I had slept in the truck in this town, right outside the Indian police station, as all the hotels were booked up. Well, the hotels are another story, to be discussed in another post, but we just wanted to go into the gas station. We found that the doors were locked up. I first thought that the town of Tuba City had been abandoned due to the recurrent deadly shoot outs that had occurred after the Coconino County Sheriff high-tailed it down to Winslow to take it easier.

Nope, Tuba City wasn't abandoned. Instead, a masked Indian squaw stood behind the glass door of the entranceway. I am no codetalker myself, but I distinctly heard the muffled sound of "you n__d to we__ mask, Wh__ Man."

It turned out we had to wear face masks or we could not come in. A tumbleweed rolled across the dusty plain, well, the parking lot, as we headed back to our steed. Actually, it may have been a Circle-K bag. We loaded our revolvers, and got masked up. Well, sure, from the movies I've seen, that's what you do out in the desert, though I don't remember used blue medical PPE being in the movies...

With the door now unlocked for us by the one I now call "shoots-with-thermometer", we were told we must have our temperatures taken. My temperature shot up a few degrees F right then and there. Words flew, such as "you've gotta be kidding me - this crap again?", "you're not gonna die today, lady", along with "hysterical" and "retarded". It got pretty heated, long after I should have just walked away. Apparently, the words "hysteria" and "retarded" mean something worse in Navajo, I dunno. Luckily all guns stayed holstered,.

We headed about 200 yards up the dusty trail to an Exxon station, in which the young brave behind the plexiglas didn't care much about our attire. Gas pumped, gummies purchased for the boy, bladders relieved, and no longer desperate, we high-tailed it out of Tuba City. Hoping the law would not be on our tail, I kept it under 75 mph.

Next time if ever we are in Tuba City, I intend to come in peace. As an offering of good will, I think we will enter the gas station bringing our slightly soiled, but still very nice, blankets with the Washington Redskins logo. Hopefully that will go over well...

OK, I know we are going to get emails galore** after this 2nd instance of putting what may not be the readers' choice in music here. Let the vitriol fly folks, because, I'm sorry, I'm just not agonna embed an ELO song for this post. I won't do it, I tell you! Don't get me wrong - they were a great band among many*** great mid-1970s bands. Jeff Lynne was creative as all get-out. However that style of music doesn't fit with the Western theme of this post. Look at the scene up above again - you're thinking Eagles now, right?

Desperado, the Eagles 2nd album from 1973, is my favorite. I got this one as a cut-out**** in the 1980s. It is what people and Peak Stupidity called a concept album. This one is a great example, with its Western theme that all of the songs could fit. In our link about concept albums, the 3 examples I give include this one, along with albums by the Moody Blues, and, yes, ELO.

It's called Doolin Dalton. Enjoy! Thank you for reading, listening, and/or writing. I may put some more songs up tomorrow, but we won't provide any more stupidity "solutions" until next week. Have a great weekend.

** Though I don't see exactly how.

*** There were so many great British acts. Think about it. Elton John, Queen, Jethro Tull, Al Stewart, Rod Stewart, along with bands that had already been big in the 1960's, like the Stones, the Moody Blues, and Led Zeppelin.

Safari on one of my iToys, but it could also be a region thing.

Laredo Tornado was on Eldorado. It was an obscure song, but it had what sounded like feather indian noises in it.
Adam Smith
PS: Not to be confused with Tuba Christmas...

☮
MBlanc46
PS You’re fortunate that there were two service stations in Tuba City.
Moderator
PS: Adam, I had thought that tatanka meant buffalo, from the old flick "Dances with Wolves" - I also did not have a lot of Lakota to fall back on, haha.

Thank you for those links. I'll insert them this evening. With all the music videos on here, I find missing ones quite often. It's hard to keep up. What's worse is posts in which I embedded related video, or even the point of the post, and I have no idea what exactly the video was about anymore.
Adam Smith
PS: Good morning,

My Lakota isn't very good, but I know tatanka does not mean the coof...

I have no idea what the Lakota word for virus is. The closest I have for corona is pȟesléte.

I too thought the blanket joke was pretty good.

Eagles On The Border (Remastered):
https://www.youtube.com/watch?v=cbctW33iRYw

☮
Moderator
PS: Alarmist, I was hoping people would get the blanket joke...well, not sure saying an Indian would appreciate the joke if he did get it...

I don't know this ELO song - will check it out.

Are you using internet "Exploder"? Well, first, I should ask if you see other videos fine. I assume you have in the past.
The Alarmist
PS

BTW, video shows as not available for me.