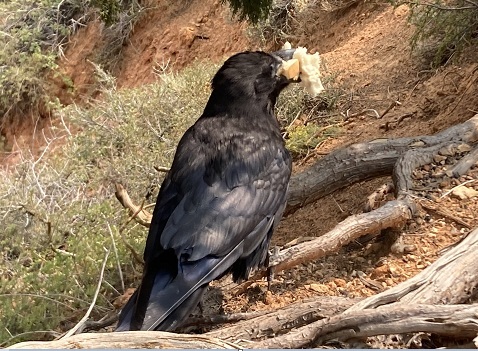 "Don't feed the animals" is a sign we saw at a lot of the viewpoint type places* at the National Parks. I get the idea. The bigger the animals, the worse an idea it is too. You know when you see friendly little odd-colored squirrels that, no, they aren't just a friendlier species of bushy-tailed rat, excuse me, squirrel, but that people have been feeding them.

There were ravens flying around Bryce Canyon that would land on a rock pillar "coincidentally" right at the view point, where people could take close-up pictures. It's one thing to feed one of them a peanut, but I saw someone feed the guy above a whole sandwich! I don't think he could even get airborne with that thing, so he had to jump into the brush and deal with it.

Crows are pretty smart birds, and these ravens are nothing but big crows. I don't believe they are as smart as the one in the Edgar Allan Poe - m, but they seemed to stay away from the tourists until another one, such as my son, comes up with a flavor blaster Gold Fish™ or something (yeah, all that salt made me worried too - and the trans fats, what's the recommended daily requirement for a Corvus?)

With all that added weight, I wonder if they flew down below the rim of the canyon just for the thicker air, to stay aloft at that extra gross weight. OK, seriously, though, they do all that flying to look for prey down there, your ground bushy-tailed rats squirrels and such. After a whole sandwich, a few Gold Fish™, three Captain's Wafers™, and a couple of MIke & Ike™s, I mean, why bother with all that natural instinct Mother Nature crap? Is it just too show off to us tourists?

OK, listen, I know a bunch of our readers will be expecting The Alan Parsons Project at this point. I'm sorry. I like that band. I just think that stuff is a little bit out there for this blog. I know, this is cough, bullshit, cough, cough. I! GET! THAT! We're (OK, I'm) the blogger here, and we're going with Dan Fogelberg. Dan Fogelberg it is, from the excellent album Souvenirs, with As the Raven Flies.

This one is not NEARLY the best song from that classic 1974 album.

* Shamefully, we didn't do any real hiking on our trip this time, just the driving-around touristy thing for the most part. Well, my boy and I did climb around a lot of the red rock formations at The Arches.

Rex Little
PS I love Fogelberg, even more than Parsons, but I hadn't heard that one before. Pretty good; would be better if the guitar solo at the end were trimmed back a bit.
Moderator
PS: We read them all too, RDB, quite a while ago. It was a pretty "based" school, though nobody used that term at the time.. So, you equate "feeding the animals" with our current Welfare State. Good analogy, IMO.

Mr. Blanc, we passed him a couple of Gold Fish, but, yeah, that stuff isn't the best, I admit. The sandwich wasn't ours - I could see a little chunk of bread, but the whole thing? We are used to our house cat that eats all manner of food - ever seen a cat who would even touch broccoli? This guy loves it. We are lucky to not have raccoons here, because I have seen them get the better of a cat, back in a different location. The coolest critters have been the owls (not sure what type). I have a picture of one looking right down at me in daytime from about 10 ft up.
The Alarmist
PS

I learned a long time ago, the hard way, to not try to eat a sub sandwich on the beach. Sea Gulls can be viciously aggressive.
MBlanc46
PS I just come from filling the bird feeders to find this. Mostly sparrows this time of year. Crows rarely visit our neighborhood, although one sees them to the north, around Roosevelt Road. A few days ago a flock of grackles invaded and devoured every last seed. Large, black, feathery locusts. As the season progresses, we’ll probably see more and more of them. The brown-headed cowbirds are just about gone, and the orioles and rose-breasted grosbeaks are long gone. So, now it’s mostly just sparrows, cardinals, and mourning doves, plus three varieties of woodpecker (suet and peanuts for them). Peanuts for the tree squirrels (fox and gray) and dog chow for the raccoons (although the guy behind us puts out meaty table scraps for them). We don’t put out anything for the white tails, but they come round for birdseed, and whatever of our plants aren’t well-enough protected. I certainly wouldn’t be feeding the critters human junk food. I trust that doesn’t violate the Peak Stupidity code of conduct.
Rubio's Disco Boots
PS Alan Parson Project has an entire album about the raven by Poe (racist!).
We got to read The Tell Tale Heart (racist!) in fifth grade back in the real America before it was Long Marched through by communist PSYWAR operatives.
You see those signs at parks but then mommygov passes out welfare checks (EBT debit card in the digital age) for life.
Ohh...that is for a loyal voting class who likes to prattle on about how rough and tough they are.