Peak Stupidity will have some other posts about the seemingly accelerated rate this country is heading into 3rd-Worldliness. I have been noticing all kinds of changes for the worse. I don't think this is normal Curmudgeonry around here either. Today, I want to write specifically with worse and worse experiences with what the Big-Biz world so nicely calls "customer care". 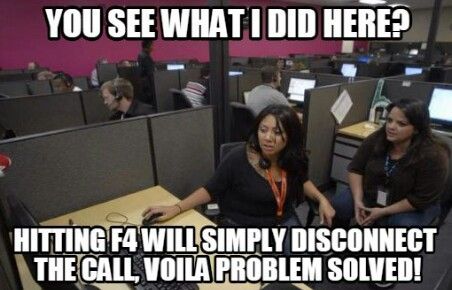 I really think the economic effects (or plan, if you will) of the Kung Flu PanicFest are showing up, (or coming to fruition, if you will again) heavily in various ways. Now, we have railed against the barely-understandable heavily outsourced customer service people in other posts multiple time before - use the Customer Care topic key. I have had to deal with this a number of times recently, and I don't recall speaking to Americans, period. You'd think that the year or so full effort Kung Flu PanicFest would not have affected this "industry" very much. They should be able to work from home with the best of them.

For the same problem, a broken laptop computer, I ended up talking to the customer service people of 2 different entities (well, my wife also, for the 1st one), Dell Computers and Fed Ex, the latter being involved in (not yet) getting the computer back from Houston, Texas. The Dell thing was downright weird. My wife started the calling, as she knows that I hate this stuff. OK, well, I told her again that she'd have to do it, as "I hate this stuff!" (It was her computer, so, ya' know ...) She only got so far before she finally reached the right individual who was too hard to understand to continue.

Well, being better with accents and understanding them, I took over the call. It got weird in a hurry. I'm no linguistics expert, but, I'm pretty good, usually. The lady was neither •Indian-sounding nor Filipina-sounding. I got the feeling she was Eastern European after some time. They may be good Christian unapologetic Western holdouts over there, but they are known to be some big-time scammers too - well, almost on par with the •Indians. Between that and each step in fact finding and decision making taking very long, I became very suspicious this was not Dell Computer customer care we were talking to at all. My wife and I spent time searching the web with this phone number of theirs looking for information* all the while we were on the speaker call, for what amounted to over an hour!

The customer service was so completely shoddy compared to a normal call, whether to Americans or not. I do not joke about the call being over an hour. Some of that time was taken by my worries about not being scammed*, but there were 2 to 5 minute holds for the simplest things (part of the reason I was worried). The accent was not actually that terrible pronunciation-wise, but it was very unfamiliar compared to the normal.

I asked multiple times where the lady was situated but got no answer. They are now told not to tell the customer, even if asked directly, I gather.

Finally, after a lot of stress, we took our chances that we'd never see the computer again. Wheww, well, it did go to the Dell dock in Houston**. A few weeks later, the FedEx*** guy must have knocked and ran like hell, per usual, leaving a note saying signature required. OK, fair enough, but then, we hadn't see a FedEx guy for a couple of days, with our sticker signed to say "just leave it".

The wife was anxious, because you really can't do every damn thing on a smart phone, so "just go down there and get it". It's nearly an hour round-trip, kind of taking the "Ex", OK, both "Ex"'s, out of "FedEx" for me. Before going, I did what was prudent and called customer service, as how did I know the computer wasn't on the delivery van at this point? (The "Door Tag" number pointed to a web page that said I could come get it, but I just won't trust a computer - more on this, as, yeah, you can't.)

After mashing 8 "0"s in a row, I was able to shut the nice computer lady voice up and get someone on the phone. She sounded just like the lady from Dell. It was the same accent. We went round-and-round, but I think my rant about "how can we do business if we can't understand each other" pissed her off enough to put me on a long-enough hold to get me off the line. Yes, I had asked her where she was, but she refused to tell me.

I called again, mashed the 8 "0"s again, and got a guy named "Nick". He's not really Nick, but rather than open up a can of worms ... I really wanted to get this computer. For a change - maybe I don't deal well with women - this guy was decent. He wouldn't tell me directly where he was, but I started off a game of 20 questions: "Dubai?" (Not a great guess - I should have asked "French Guiana?" or somewhere just to miff him a bit and test his Geography.) Nope. At the 3rd guess, "The Philippines?", Nick said "yep". Not bad, got it in 3!

After a mite bit of confusion, Nick told me I could indeed pick up the package across town. Now, we transition, if I can still write that with a straight face, from customer care stupidity to other 3rd-Worldliness, just for a bit. There across town, the black lady with a mask on - kind enough to take it off each time I said "I just can't understand you with that on" - told me this package was now containerized, and she couldn't get it. It was set up to be taken by the delivery truck, again. Damn! It wasn't her fault. It wasn't Nick's fault. I sure as hell wasn't MY fault. I'd done what I could before I wasted an hour.

See, those IT or logistics people at Fed Ex Express never got around to putting a flag in the database to get a guy like Nick in the Philippines to tell me that I couldn't get it right now. He had specifically told me I could, as did the website (remember the website?), that I could get it after 11:30 AM, and it was 4 in the afternoon.

Hopefully the computer will come today. There's a larger point here, though, regarding my experience. Has Big Biz just outsourced all the rest of the whole Customer Care "Industry" during the full year of the PanicFest-induced economic crash? I mentioned earlier that this is a field for which working from home is suited very well. However, did many of these people still in America take that $3,000/month unemployment money and run as fast as they could from the cubicles? Are they never coming back? Did Big Biz have to do this, or was it just more "continual cost saving"? I wonder, because, when you stay on the phone for over an hour, or call back multiple times to get an understandable care representative, how much money does this save exactly? Is the loss of customer goodwill any part of the calculations of the beancounters? Oh, wait, that's right, as with Richard Gere in An Officer and a Gentleman, "we got no place else to go!"

* These scammers can be very clever. I suspected a false number, then checked the URL we got it from really carefully, My opinion varied from 50% chance of a scam to near 90% at one point. (The scam being we send them the computer, they fix it and they keep it, and bye bye.)

What I then did was think very carefully about what information they already had on us from this very call (via asking my wife what she had given them). I compared that with what they seemed to already know. For example, they asked for my home address. "Well, you should have that." The fact that it took them over 5 more minutes - on hold - to find it made me seriously wonder if they had just looked one of us up on line and made a best guess. Damn, it was getting like Spy v Spy for a bit! They did have an email address that we hadn't give them, and not an obviously named address, so I relaxed just a bit.

** I'd even looked up the address on bing maps, with the photo aerial shot, to make sure what kind of place this was. I was that paranoid, and rightfully so, I hastily add.

*** Oops, it's "FedEx Express" now. How damn redundant and stupid is that? I hope the corporate naming consulting company didn't make more than a couple of million out of that one ... "The rate is too damn high!"

MBlanc46
PS Humans are expensive. Humans who actually know something (otherwise known as white guys) are really expensive. Hence, the employer classes are going hell-bent-for-leather to eliminate humans, especially the ones who actually know something. Your problem, I think, is not so much Third-Worldization, as globalization. The two have, of course, a considerable intersection, but this seems to be more a matter of the latter than the former.
Jimbobla
PS I have just had this kind of experience with BestBuy. Struggled to understand numerous persons with their accents. Long periods on hold. They didn't sound like they were masked, either. I was terrified.
Moderator
PS: I'd never heard that Stones song in my life, Dieter. Thanks. I guess this is memory of Charlie Watts.
The Alarmist
PS

Just as long as they don’t induce you to washing down keys with a chug of booze, I guess you’re going to be OK.

I always kind of envied the Navy’s Good Humor Man suits ... Air Force service blues looked like a bus driver uniform if you didn’t adorn them with all your ribbons and badges ... and even then.
Dieter Kief
PS OT - I've just revisited my Black & Blue Memory Motel where I heard this Melody