Yep, it's the mirrors 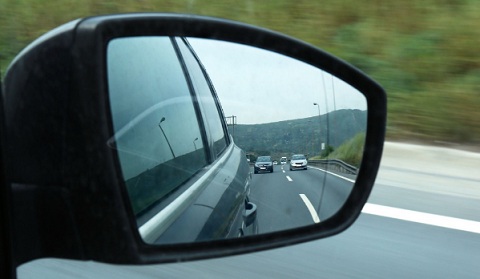 This is a follow up from a post of over 2 years back, one of our curmudgeonly about cars. In this case, it was about modern vehicles, of which we're all going to have to deal with at some point. In Modern Auto Stupidity, Peak Stupidity discussed the problem now for those of us who like to ride with the windows down.

Hey, some of us are still not scared of the outdoors, even under America's current state of Faucism. As we noted, the problem doesn't occur at low speed, so riding around town with windows down is still doable. At high speed, even just 60 mph, there is air turbulence that causes all occupants to feel that Steve Austin feeling - "she's breaking up, coming forward with the side stick ...". I mean, it's BAD, especially the effect from the back seat windows (we have the standard 2 rows).

I speculated on the big side rear-view mirrors being the cause of this, and now Peak Stupidity has verified that during a test run on the Peak Stupidity proving grounds called the interstate out West. Why so long a wait? The problem was that the BIG-ASSED (to be more correct) mirrors on our only vehicle with the things are in fixed housings. The rental SUV we drove, however, had the feature of inward-foldable mirror housings. Yes, it's another thing to fail, but at least this feature is a manual one - no motors and "mirror control computer" are involved. That's a good thing, and I do like this feature. We used it in a very tight parking spot at one of our stopping points.

It was very hot on the trip, so nobody ELSE in the family was up for windows-down driving. Finally though, after maybe 3 days of driving this thing, it came to me - hey, let's test this mirror theory.

Yep, with the mirrors folded inward, the turbulence inside the cabin with the windows down was greatly minimized. It may have been as low as in an old sports car, sold with no A/C. Ooops, only thing is, once you do this, you don't have your view, and as Peak Stupidity has railed against to a slight degree (so far), visibility in these new small and mid-sized SUVs sucks ass!*

So, the point here is not that the inward-folding mirrors solve the turbulence problem. It's just that I know the cause for sure now.

* In fact, this one had maybe the worst visibility for changing lanes to the left that I've ever seen. It took 2 days before I felt comfortable coming left without greatly hedging it.

Moderator
PS: Thanks for the anecdote, Adam. I should have brought up the safety issue, as I see it anyway, in the post. I clean forgot. I really used to operate that way - the car didn't have A/C anyway - and I just old my boy today to never listen to music while riding a bike. It's a bad idea, IMO.
Adam Smith
PS: Good evening...

“I think it's a lot safer to be able to hear outside vehicle noises.”

When I was in driving school one of the instructors told a story about a guy who was at a stop sign about to turn down a one way road. Everything looked clear, but he didn't go because he heard a loud engine noise, though he didn't see anything coming or out of the ordinary in either direction. He just waited at the stop sign, because he heard that noise. It just so happened that a large dump truck was traveling pretty fast, around a blind curve, in the wrong direction, down that one way street.

Had he not heard that noise, and proceeded though the intersection, he just might have been run over by a dump truck that day.

☮
Moderator
PS: They were a lot more clever with that air flow, but not the streamlining, back in the day. Many people, some being my Dad bought cars without the AC option.

Mr. Blanc, we will have to do that, but kids were getting bored in the back. Sometimes, we have to throw out banana peels, but I can stand that turbulence short-term.

One more thing: I always liked windows-down driving in my one other car I've had along time, due to the safety aspect. In town (where you CAN drive this new one at 40 mph with them down), I think it's a lot safer to be able to hear outside vehicle noises. It's especially important due, to, as I wrote in this post, the terrible visibility out the sides and back.
MBlanc46
PS Just give in. Crank up the AC. Keeps it a lot quieter in the cab, too. And Robert, Yes! Wing windows!
Adam Smith
PS: Good morning...

☮
Moderator
PS: Like in the old bugs, Robert?
Robert
PS: Wing Windows. I want them to come back.