I've got no evidence, haven't read anything in particular about it, and would not even put much of my own money on it, so please treat this post as the speculation it is. 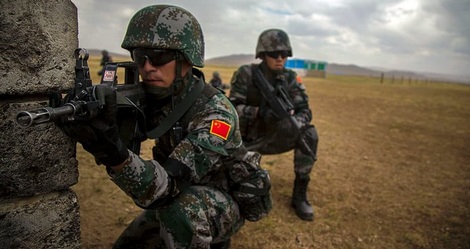 Zhou Bai Dien leaving Afghanistan is like Nixon going to China. Former President Richard Nixon made a name as a staunch anti-Communist, so the nobody could accuse him of being soft when he visited China in 1972*. The current selected President has been the hand-maiden for the ctrl-left for a long time, having worked for the race hustler Øb☭ma for 8 years and having been with the Feral Gov't 11 years longer than the median-aged American has been alive. After 4 years of President Trump, as far from a Neocon as we've had in office since Ronald Reagan, being unsuccessful at ending this ridiculously long occupation of a Moslem shithole, now this guy just up and did it. No one can accuse him of being one of those "right-wing warmongers". (Yeah, I know, they are in all the wings now.)

This post will not argue about the stupidity involved in the exit itself. That's a done deal. Afghanis holding onto wings or trying to hole up in wheel wells of C-17s is not my problem. The poor American bastards stuck in country will hopefully get out, but from the usual crap I've heard from them about "oh, Afghanistan will go to hell... the women will have to cover up ...", I don't feel that sorry for most of them. What are you doing there? Was it about making a killing as a contractor, doing missionary work? I'm more worried about our country going to hell, which it's in the process of, and so should they!

Peak Stupidity has had not one good thing to say about Zhou Bai Dien so far, but we give him all the credit he deserves here. He has the Neocons of both squads of The Party all over his ass, from the pundits to the generals**. Conservative Americans ought to be happy about this. I am glad to see that our favorite literary pundit, Miss Ann Coulter, is happy about this too** The big question is "WHY?"

Why did this lefty puppet President end this war? It's not making him popular with his people on the left. Is it just his dementia? Did he forget what the Deep State has been trying to drill into his head for the times when he puts on his Commander-in-Chief hat?

I had another thought. The reader may be wondering why Peak Stupidity insists on using the "Zhou Bai Dien" Chinese PinYin style moniker for the guy. Well, back before the election, you all might recall all that Hunter Biden / Chinese corruption/connection business. (Well, the corruption part wasn't confined to China.) With his only living son being the screw up would-be playboy Hunter Biden, I would guess Joe would care about Hunter more than anyone else in this world (including "Doctor" Jill and his Kameltoe sidekick). The Chinese government/CCP could have anything they wanted to blackmail Joe Biden with through his son Hunter.

Do the Chinese just want the American armed forces the hell out of that land? There are important minerals in those parts. Having some control of that territory could help a lot with control of China's Moslem problem out west. Of the 14 countries**** that border China, 5 of them are a western cluster of "stans", Afghanistan being near the middle (4th one south) that all border that troublesome "province" of Xinjiang.***** They could follow up on some of those "one man's terrorist is another man's genocide victim" types.

As we have written multiple times regarding China and any possible territorial ambitions: So what? Let them. This country is beyond broke. Let's let the Chinese have a go at colonizing or running the world and then being the world's policeman. Let the Africans bitch and moan about those evil Yellow Colonists. Let's see the Chinese get mired in complicated political/military engagements. They may do better. They won't be as nice, altruistic, and accommodating as the Westerns were a century (+/- 50 years?) ago, but, and maybe for that reason, they may do better.

It's hard for Americans used to a government and military that took control all over the world, to let go of the worries about the resources and the land. However, we have a bountiful country. America has been a self-sufficient country before, though some couldn't imagine it now. If we somehow could stop the internal destruction of the country, it'd be really nice to sit back with some popcorn and enjoy the Chinese hegemonic follies.

Anyway, Peak Stupidity has no scoop here. We are just speculating if the Chinese may have had a hand in this. They have hands in LOTS of things.


* It was the first time a US President had visited Communist China (formed October, 1947).

** Boy, that General MIlley sure gives me the willies, with his woke nonsense. Were he around in George Patton's time, I would think Patton would have not only slapped the shit out of him, but likely took him out on the battlefield with his pearl-handled pistol... accidentally, of course.

*** Except for the same objections most Americans ought to have about this being used as another population replacement project. We don't want a one of these Afghanis here. I am really glad to see that Miss Coulter has become very principled over the years, BTW.

MBlanc46
PS First, because, since the 1950s, the Dems have been the “anti-war” party. And whilst the Dems are full-bore globalists, and globalism does require some military muscle in order to impose itself, there is a substantial faction of the party that believes that they can be both globalist and “anti-war”. And, since what was going on in Afghanistan was a war, that faction opposed what was going on on Afghanistan (as did a lot of the rest of us). So, there’s that. Second, Donald Trump, by announcing the US withdrawal for May 2021, when he foolishly thought he’d still be president, he gave cover for Chou Bi-Den* to withdraw the US forces, if a bit belatedly. If things went pear-shaped, Chou could say, as he has said, “It was Trump’s idea; it’s all his fault”. It’s a two-fer: He gets to give something to his “anti-war” faction and dump a bucket of worms on the Bad Orange Man’s head. Did the Red Chinks have anything to do with it? I doubt it, but I don’t claim to know.

* I’m s Wade-Giles guy.
Moderator
PS: That's a lot to digest, Alarmist. There are so many parts that could be true. That business with the Afghans clinging onto the wings (wings, really?) is not something I've watched yet. People talk about the pressure/temperature doing someone in, but just the air drag at near take-off speed...

Part of what you wrote reminds me of the scene in "Apocalypse Now" with Dennis Hopper.
The Alarmist
PS

Here’s what I said, somewhat tongue in cheek, to Heymrguda when he asked, “Imagine the reaction if trump had presided over this fiasco.”

Trump would have done a deal with the Taliban … oh wait… he did. Then the Pentagone dragged its feet, and Biden screwed the deal by waltzing past the agreed deadline.

We sure shipped a lot of nice weaponry there in the last months. Was the Pentagon planning another surge that Joe screwed by ordering a hasty, haphazard departure, or was the plan to arm the New Taliban all along? Is the New Taliban leader who spent eight years as a guest at Gitmo seriously intent on striking at the West, or was he programmed while there to destabilise China’s BRI? I know Afghanistan has lots of big caucasian-looking guys, but some of them look and hold their weapons like they are trained Special Forces ‘Operators.’ Ours, or Spetznaz (why would we arm the Spetznaz)? Was that scene of smiling and waving Afghanis running alongside the departing C-17 staged? Where did the falling bodies come from … the gear was already fully retracted. When did the dozen or so pictured on the bulge of open gear door fall or get blown off, and how did the three falling hold on past the closing of the gear doors? Think of Mission: Impossible – Rogue Nation, with Tom Cruise holding onto the A400 as it climbs … kind of Wag the Dog, no? It wouldn’t be the first time the MSM staged things to support the Deep State.

One day the New Taliban are all Kumbiya and talking up amnesty and girls going to school and women working, and the next day they kicking people around, almost as if a director is shouting at them, “You aren’t being Taliban enough!