20 years of war at a cost of something like 2 1/4 Trillion dollars spent by a beyond-broke Feral Government resulting in C-17s scrambling out of Kabul to escape 19th century-style goat herders vs. a few hundred rambunctious patriotic Constitution-loving American citizens spending a few hours in the chambers of Congress uninvited one January afternoon. Hmmm, tough call.

You have 30 seconds. Make sure you frame your answer in the form of a question. Whaaa? OK, just pick A or B.

"These Insurrectionists, are they in the room with us right now?" 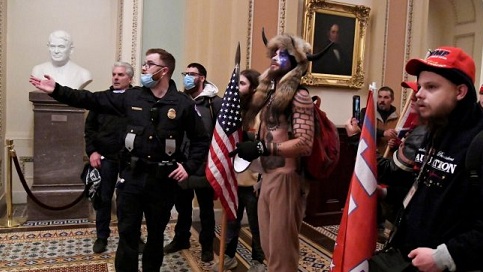 "You go tell the Americans to go fucking themselves!"

Our commenter The Alarmist gave the idea to Peak Stupidity in the comments section. There's gold in them thar comments!

My understanding is that Fresh Meadows and Flushing are heavily Chinese- I saw nothing to gain say that observation. Most of the Asians I saw, and I’m not skilled at telling different ethnicities apart, we’re masked up.

The hotel was a national chain, somewhat upscale, but not luxury, right on the LIE and Utopia Parkway. I saw no references to Fountains of Wayne. A neighborhood of modest, but most likely very expensive, well kept houses.
Moderator
PS: Ganderson, what a flashback to the 1960s just to read about someone who dropped off a balcony due to drugs. I didn't think that kind of thing happened anymore.

Was that hotel in the Queens Chinatown? We have stayed there before. I note that the people in Chinatowns go by their own set of rules (such as blatantly requiring cash only to avoid any and all taxes). However, they seem to me to be the most paranoid with the masking.

That is indeed amusing about your stick shift car. Be glad the guy admitted he couldn't drive it, at least, rather than learning on your car. Have a good trip back to western Mass!
Ganderson
PS. Most were not masked, but a lot were. All the Mets’ employees were masked. Apparently a guy who was dosed fell to his death from one of the upper decks during intermission. I didn’t know about it until I got home.

The hotel I stayed at in Fresh Meadows, Queens has a mask requirement, but no one enforced it.

As an amusing side note, I got free parking because the valet guy couldn’t drive a stick.
Moderator
PS: Fixed, Mr. Smith.

That sounds pretty good, Mr. Ganderson. BTW, was anyone masking up inside the ballpark?
Moderator
PS: Yeah, Alarmist if the Jan. 6th event had been really organized, it may have resembled the Richmond rally of Jan 20th, '20. There would have been no stopping the crowd had they decided an insurrection was in order at the time.

I didn't catch that bit. Hillary? Who does she even report to, the ghost of Seth Rich or someone?

Yep, none of these people have seen reality.
Muh Teevee Muh Vaccine
PS We won't be leaving the GOE anytime soon.
It is too important and no NWO without Afghanistan.
The former USA is the sewer pipe of evil to the world now thanks to the worst government that money can buy.
Look for false flag kabuki overdose now that impeachment is on the table for Jo Jo Magoo.
If the Kamal gets in it is bunker time and 7500 degree mushroom clouds of diversity.
Ganderson
PS

OT Mr. Moderator, but last night’s qsecond set was awesome, highlighted by a smokin’ Althea, China/Rider, and a closer of US Blues.

Hippies are still annoying, however, but they were offset by the spectacularly beautiful woman in the seat next to me.
Adam Smith
PS: I'll take land wars in Asia for 2.26 Trillion, Achmed.

Maybe we should ship Madame Peolsi, the Dem caucus (particularly Andrea Occasionally Cognizant), and the Never-Trumpers (particularly Liz Cheney) over to Kabul on the next C-17 to give them an idea what a real ibnsurrection looks like. You know ... a fact-finding junket. They can stop in Dubai for duty-free on the way back.

If Trump had actually called on his supporters to show up armed on 6 January, he’d probably still be Prez, and Milley would be the Michigan Militia’s bitch.

Did you catch that the Canadian PM couldn’t reach Biden or Harris, so he called Hillary? Seems he skipped Pelosi and Leahy and demoted Blinken.