Peter Brimelow on high-brow TV long ago and the current S. Africa. 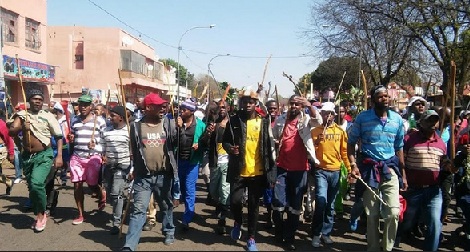 I read almost every VDare article, post, and letter-to-editor, and I especially like to read or hear the views of its founder Peter Brimelow. In this recent James Fulford post, TRAITOR'S HEART Author Rian Malan Shocked, Shocked, To Learn That Racist Black Majority Rule In South Africa Is Bad, Actually, there is a half-hour video of the bottom from an old 1987 Educational TV show.* called American Interest with Peter Brimelow in it. (Yes, he looks a lot younger, but so did we all!)

I can't find this video on either youtube or bitchute, so, for now** I will have to refer you to the bottom of that VDare page, with otherwise very good writing by Mr. Fulford, as usual, too. In it, one Peter Crow is interviewing Peter Brimelow, as a recently-returned from S. Africa journalist and Congressman Sanders Levin (Traitor - MI)*** about the anti-apartheid American embargo. That embargo, on some business and some trade with American companies, had just been put in place 6 months prior. I can remember this going on myself.

Peak Stupidity would like to again (as we did here, wrt the long-forgotten Zhou Bai Dien blatant plagiarism incident of 1988) show our amazement at how fair the Lyin' Press still was, or at least seemed, 3 1/2 decades ago. You've got to watch most of this one with Peter Crow to believe me, after seeing the bias of these people over the last few years - they don't even try to hide their bias now. That's reason alone to enjoy this video. Peter Crow seems to be even leaning toward Mr. Brimelow's view over the views of a (GASP) SITTING D-CONGRESSMAN! Would that not be considered an insurrection nowadays? (Hell, go back another decade, and people used to shoot Congressmen to kill**** - even a half-way decent one, at that. Granted, it was Guyanan-Commie-Americans that done it.)

What's interesting to see is that Mr. Brimelow was just as careful about not getting certain labels put on him 34 years ago as he is now. Contrary to what James Fulford wrote in this same post and has been written hundreds of times on VDare about the problems with a black-run country, Mr. Brimelow framed his views in that interview with what was good for blacks. He did not really want to go any farther and speculate how the White South Africans would end up being treated after apartheid, but I think he knew better. You could go farther with the truth, but still only so far, in 1987.

Speaking of the truth, the predictions the White S. Africans themselves had made (well, after all, they LIVE there and know) about bad relations among the various black tribes coming out have come to pass too. Please don't try to help, White people. You've done enough already. That's the attitude around the world now, as the blacks fight their way back to old Africa. The latest is put on "xenophobia", such as the headline of the article that the image above came from:

(Oh, and one of the 1st indications of the onset of 3rd-worldliness - bad grammar.)

Imagine if the old Afrikaners had been xenophobic enough to have kept out most of the Bantus from their land way back. Oh, what might have been!

Peak Stupidity has not put any thoughts down till now about the stupidity in this portion of the world. We have more than enough stupidity on our side of the world. However, S. Africa ought to be a big lesson for us. Things could really go that way here, if we don't ever do anything about the immigration invasion and the continual retreat on racial matters, both. Stupid Americans, from the by-far biggest power in the world at the time, were leaning on the White S. Africans to give up their country in 1987. At least we don't have an outside power doing that to us. We don't need it - they have been inside the country for years, doing the same thing.

* Remember, it was "ETV" - I don't remember them emphasizing the "Public" as much, as Americans didn't exactly embrace government-run shit back then. They advertised their corporate sponsors at the beginning and the end, and didn't much mention US gov't support, as you can see in this one. By "Educational", weren't they tacitly admitting that, yeah, the other channels are all infotainment including the news?

** Right here and now, I can't do a view source and see the VDare html to see where they got it from. I may be yet able to embed this video.

**** That old post is titled They (still) shoot Congressmen, don't they?, like the old movie I've never seen. It refers to Leo Ryan and the Jonestown drinking of the Commie Kool-Aid American history posts of ours - Part 1, Part 2, Part 3, and Part 4.

https://twitter.com/WhiteHouse_alt/status/1015140187993755648?s=20
Moderator
PS: Thanks for the un-recommendation, Rex.
Rex Little
PS Your life is richer for never having seen that movie. I wish I could say the same.
The Alarmist
PS

Given the noise being made about “giving” black Americans several southern states for them to call homelands, I’d say the US is well under way to following Zuid Afrika naar beneden in het strontgat.

To your remark, Mr. Moderator, Rome fell because they opened the frontiers to bring in slaves and, later, barbarians to do the work Romans would not do.
Moderator
PS: • Agree Completely, Mr. Blanc.
MBlanc46
PS The insatiable lust for cheap labor will always come back to bite you.